A Natural history of Skull Island 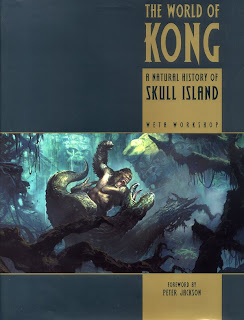 Click to enlarge
King Kong? King Kong?? Surely there's nothing there of interest for anyone interested in as serious a subject as fictional biology? After all, this is an American film script for an adventure movie from the thirties, so it is not likely to be consistent in any fashion, not even within the story. There is a sinking island, with lots of big dinosaurs on it that somehow survived the last 65 million years. Somewhat surprisingly there are also enormous gorillas there; their ancestors somehow made it from the Virunga mountains to a solitary island at the other side of the world and then quickly became gigantic. The only thing that is believable is that there are humans; humans are even more widespread than cockroaches after all, so that part does make sense. It's probably for the best that no-one decided to rectify all these issues when the film was remade, as there would be no point. The film would not be the same without Kong fighting off a tyrannosaur descendant. So, if you forget that the premise for the story is ludicrous, what's left? A large number of extremely well-designed and animated creatures, of course. Forget about the story, just look at the animals. I guess you may have seen the movie, but there is an interesting book to go along with it: 'The world of Kong. A natural history of Skull Island'. It can be bought directly from the people at Weta, but also through other channels such as Amazon. The authors did their best to come up with some information to fill holes in the logic, and do so rather well. Of course, suspension of disbelief is needed, but that is not difficult: the book is too much fun to be grumpy. I have had it for some time and still I leaf through it every now and then, simply to look at the animals. They are every bit as good as the Venusian animals shown in a previous post (there are a few I think less well painted, but that would be nit-picking). I will not show the big dinosaurs, so if you want those you will have to buy the book, but will focus on a few of the smaller animals. 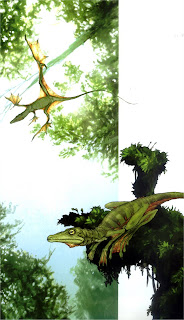 Click to enlarge
This is an Aerosaur (Aerosaurus verdens), an evolutionary experiment in flight. No doubt all of you are reminded of the dinosaurs in whom both the front as well as the hind legs provided lift. Here's another one. I really admire the liveliness of the painting. 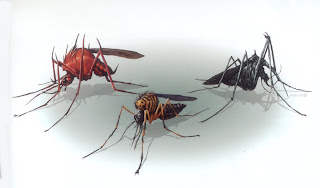 Click to enlarge
Some lovingly done mosquitoes. The middle one is Mortaspis. According to the text these various mosquito lookalikes are about two inches long, which is probably pushing the limit for blood-sucking insects. But with animals such as dinosaurs and Kong around, perhaps... I put this one in because I think the quality is really outstanding. The name seems to read as 'Mahy', but I could not find that name or anything looking like it in the list of illustrators in the book.

Click to enlarge
Finally, some more carnivorous insects (the original is better; I had to manipulate the scans). If you have the impression that most of the illustrations deal with aggressive animals out to eat others, you would be right... But there are herds of herbivorous dinosaurs out there, so the food chain is not forgotten. By the way, a visit to the Weta website is recommended; they have some very creative people down under.
Posted by Sigmund Nastrazzurro at 15:57

To be fair, it is suggested in the book that Kong is not a gorilla, but a descendant of Gigantopithecus, and that both his ancestors and the Skull Island Gaur came to the island through the humans.

And about the winged dinosaur part... Yes, birds are in fact theropods, but no dinosaurs had membraneous wings, while pterosaurs did. (I assume you meant meant animals with membraneous wings once the animal in the picture is depicted that way)
Pterosaurs certainly weren't dinosaurs, it seems they even weren't archosaurs, but fenestrasaur descendants (sharovipteryx) ;-)

was rereading these old posts, decided Petr's comment deserved a small update, since in the last 4 years some pretty amazing stuff has been found palentologically speaking. one of the ones that has proven pretty darn amazing, in a "what the heck" way, is the Yi Qi (Lit. "strange wing") which was a small Maniraptorian which not only had feathers.. but it's wings were batlike tracts of skin stretched between enlongated fingers! and i say batlike because like bats the skin stretched across all of it's fingers, rather than just one like a Pterosaur. there is still some debate as to whether it could do full flight or just gliding (the skeleton was fully articulated with soft tissue impressions, but the difference between it's wings and a bat's or birds wings makes things tricky)

Evolution can truly create some amazing and weird things.