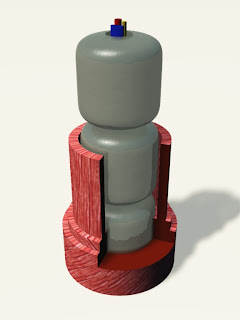 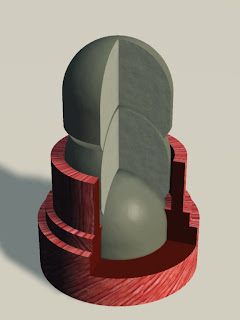 Well, it took a while to write a new chapter. The reason is called 'work'.

Anyway, to continue with the 'Not walking on tentacles' subject, I made some illustrations with Vue Infinite, shown below. Let's have a look at a typical tentacle. 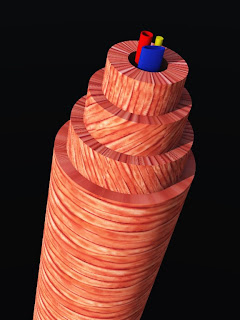 (Click the image to enlarge it)
This particular one is almost entirely made up of muscle cells (also called muscle fibres). the fibres are the red elongated structures. I played with images of mammalian striated muscle cells to form a reasonably realistic texture. The first thing to remember is that muscle fibres can only pull; they cannot push! So, if we want to use a tentacle as a leg, pushing against the ground, we will have to devise a way to push with elements that can only pull. Normal legs, with skeletons, work because the two jobs are separated: the muscles pull on the bones and the bones do the pushing.

Back to the tentacle: it is almost entirely made of muscle cells, except for the very centre, where I have put in an artery, a vein and a nerve (these have the customary colours found in medical textbooks: the artery is round and red, the vein is rather floppy and blue, and the nerve is solid and yellow). No bone, of course; it wouldn't be a tentacle if there was one!

The muscle cells are arranged in concentric layers, and the muscle fibres are arranged in different directions in different layers. The innermost layer has its fibres running lengthwise. If they contract, the tentacle will shorten. It will also become thicker, as the total volume of the tentacle will not change; after all, the whole thing is largely water, and water is incompressible. You can also have the fibres of that layer contract on one side only; if that happens, the tentacle will bend. You do not have to have this happen along the entire length, so the bend can happen anywhere. Already our tentacle can move in various directions.

The outermost layer has its fibre running transversely. If these contract, they will squeeze everything inside. Having nowhere else to go, the tentacle will become thinner, and therefore longer. The two other layers were added to add a bit of complexity and dexterity: their fibres run diagonally, so they will tend to twist the fibre. They also have compressive as well as shortening effects. Playing with these layers and fibres should allow the tentacle to move in just about any way you can think of.

There is no particular need to have the layers arranged just so. In fact, there might be another lengthwise layer on the outside, and there are various other things you can think of. As it stands, the tentacle can pull quite well. By activating the circular fibres the tentacle will become longer; isn't that the same as pushing? Well yes, but not with any great force. What we have so far is something like the human tongue, and you can push it out of your mouth, or against your teeth. But you can't do push-ups with it. 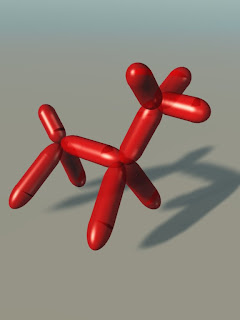 To understand why, look at the balloon animal shown here. Its 'legs' sacs of air, and the only reason they hold their shape is because the sac under pressure. If we do the same for the tentacle, and tighten the outermost layers of the tentacle over its entire length, the inner bits of the tentacle would be under pressure, with the same result: a structure with enough tension to hold its own shape. But you cannot put any weight on a balloon animal: the legs buckle.

With that as a given, the simplest solution is to increase the pressure tremendously, so the leg/tentacle will not buckle so easily. That seems to be the solution chosen for the 'megasquid' in 'The future is wild'.

But that is so wasteful! The tension has to be built with continuous muscle force, and that eats energy. In contrast, to stand on bones the only energy you need is to keep them from buckling at the joints, and if you balance them right, all you have to do is a balancing trick rather than a brue force approach. A second problem is that the pressure inside the tentacle would be very high, and that creates big problems for getting any blood to the muscle cells. Blood pressure in the tentacles would have to be even higher than tissue pressure to force any blood through, and that in turn puts heavy strain on the heart, or hearts, come to think of that. More energy, more engineering problems. Anything with bones would run rings around such silly squids.

I think walking on tentacles requires more than a very thick tentacle; it needs evolution to keep the costs down. More on a possible solution next time...
Posted by Sigmund Nastrazzurro at 21:49 No comments: