A year ago images of flying squid were in the news, including two short papers in Scientific American (here and here). Somehow I missed them at the time. Perhaps they are old news to readers of this blog, but I thought they were still very interesting. After all, cephalopods (octopus, squid and the like) attract attention from just about everyone with an interest in speculative evolution. I think Dougal Dixon was the first to have them venture out on land, a concept followed so often that it has become a cliché (but which does not mean that it was not a great idea at the time). I criticised the concept of 'walking with tentacles' in a series of blog entries later, reasoning that tentacles are so poorly designed to withstand compressive forces that evolution would turn them into limbs (here are the first, second, third and fourth posts on the subject). By the way, cephalopods with jointed legs would, for me, be much more interesting than ones painfully plodding about on tentacles. Unfortunately, their renal system is probably a much larger hindrance from them leaving the water than having tentacles; but I digress.

Cephalopods have jet propulsion, also a rather interesting feature to have aboard, and one that also crops up regularly in discussions on alien animal design. Some went so far as to equip animals with fuel-burning jets, something belonging in the needs-a-lot-of-faith category.

So now it turns out that some squids can leave the water, much as flying fish do, and probably for the same reason: to escape predators. And they use jet propulsion to do so. I wonder how people would react if squid did not exist and I would invent an animal with a double set of propulsion organs, fins as well as a jet: "What, two means of propulsion? That is improbable and inefficient!" Have that followed by the remark that they can also use their fins as wings and fold up their grasping organs to have a second pair of wings: "He's lost it this time!". Facts are often stranger than fiction, and flying squid are a prime example.

Internet searches revealed more pages and photographs of flying squid,including the following two ones. I checked two books on cephalopods I already had, and one book mentioned that the family Ommastrephidae is in fact known as 'flying squids'. The other book specifically mentioned that the fins are 'not especially well modified for gliding'. It seemed I had missed all of that.

This is a large image found here; The blogger program would not let me import all of it, so I had to cut off portions not showing squid. Even so, you may have to zoom in to see them properly. Some squid trail a stream of water behind them, that appears to be breaking up into drops in some cases. The text mentions that these images were taken as a series of rapidly taken images, and that this time series allows calculation of how fast the squid moved. That is obviously true, but unfortunately the results of those calculations were not stated, which is frustrating.

Click to enlarge; from: Bartol et al, Integr. Comp. Biol. (2008) 48 (6): 720-733
Squid squeeze a jet of water out of a tube, the 'siphon'. The image above nicely shows that the siphon can be turned around allowing the squid to move in either direction. The fins at the end of the body are a normal part of squid anatomy. Squid use both their fins and their jets to move around. The principle of jet propulsion has to do with actions and opposite reactions: pushing away a mass with a certain force results in you undergoing an equal force in the opposite reaction. The force gets bigger the more mass is pushed away and the faster it is propelled. In jet engines air streams in to the engine and out of it continuously, but in squid the propulsion is 'pulsatile'. The water is held in the mantle cavity, surrounded by muscles; when these contract water is forced out. Afterwards the muscles relax, the cavity expands and sucks in water for the next cycle. On the whole squid jet propulsion is nowhere near as efficient as swimming with a tail is, as fish do. Recent calculations suggest it is not as inefficient as formerly thought, but squid still do well do use their fins as well as their jet propulsion system. In fact, they may be better off for having two propulsion systems. I found some interesting material on that subject in a free scientific paper on the subject (from which I took the diagram above as well). 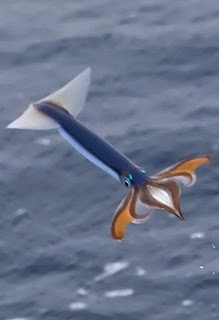 Click to enlarge
This image, found here, shows one flying squid in close up. The animal is flying towards the left. The image suggests that the fins are held in a V-shape, with the tips directed upwards. Holding wings like that is a design trick to prevent rolling about the body axis: when the animal rolls to one side, the wing on that side becomes more horizontal, so it will generates more lift. The other wing becomes more vertical and generates less left. The two effects counteracts the roll and help stabilise the body. At the other end of the animal the tentacles are held in a symmetrical way in a horizontal plane, and there appears to be a membrane between at least some tentacles. This position can only mean that the tentacles act as another wing. I cannot see on the large image whether the tentacle-wings are held in a V-position as well. The close-up seems to suggest they are not. So the 'flight plan' of the flying squid consist of two pairs of wings positioned far apart, with a long body between them. Now where have I seen that before? 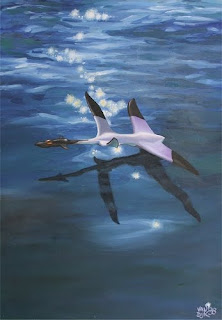 Click to enlarge; copyright Gert van Dijk
Actually, only here, as far as I know. The Furahan Seasoar can be found on my website. I developed it consciously in an effort to see what could be done with a four-winged body plan. I reasoned that placing the wings far apart would place relatively much mass at the ends of the animal, making it more difficult to rotate to the left and right. The design would be stable, though, good for long and energy-efficient flights. In fact, I made a paper version once that flew quite well (which gives me an interesting idea for a future post...). The front pair of wings are held in a V-shape, but the hind pair are not. In truth, I did that only because it looked good, and I never stopped to think why one pair should be held in a V-shape and the other not. That arrangement looks a lot like that of the flying squid. Perhaps it does serve a purpose besides looking good.

The large image shows trails of water behind the squid. Does that mean that the squid are actually using jet propulsion to power their flight? Yes and no. Maybe. On the one hand it is certain that the jet allowed them to accelerate enough to leave the water, where resistance against movement is very large. That same force should have a stronger propulsive effect in air, which offers much less resistance to movement than water. On the other hand, weight is not a big problem in water, but it is in the air. Any water carried into the air to serve as 'ejection mass' for jet propulsion increases the mass of the animal and will therefore impair the squid's flying ability considerably. The good part of that is that the water is squeezed out, so the mass of the squid plus its store of water decreases quickly. As the store of water is depleted the squid gets an extra boost, which helps to propel it. There must be a complex optimum in there somewhere, in which the mass of stored water, the force of propulsion and the moment the squid leaves the water are all factors that, when balanced subtly, result in the best soaring ability. But such thoughts count in the long run of evolution. For an individual squid with a predator on its heels (so to speak), getting out of the water NOW regardless of any optimisation might be the wiser choice.
Posted by Sigmund Nastrazzurro at 12:36 6 comments: