The previous two blog entries on sandswimming animals (here and here) made it clear that those who wish to populate their fictional worlds with animals swimming in sand will either have to restrain their fantasy or choose to forgo realism. Sand is not a forgiving medium; a 400 m sandworm, as in Dune, must shift millions of tons of sand to move, which is simply too unlikely to consider. While that reasoning argued against giant sandswimmers, the fact that any sandswimmer must lift all the sand above its body restricted the choices even more: sandswimmer cannot dive deeply. Facts can and often do spoil beautiful fantasies; sorry, but that can't be helped. This leaves sandswimmers as fairly small animals that swim just beneath the surface. Not surprisingly, this describes real sandswimmers quite succinctly. There appear to be several: there are various lizards and at least one mammal, the African golden mole rat. 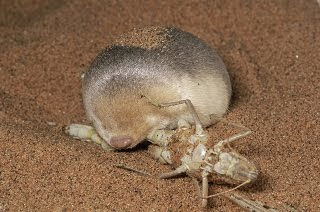 http://www.nordicphotos.com/en/details/1350398
Here is an image of such a mole rat: Eremitalpa granti. There do not appear to be many studies focusing on how mole rates 'sandswim', but what there is reveals some interesting facts. Apparently someone has already measured how much energy it costs: sandswimming costs 80 times as much energy as running on the surface! That is a heavy price to pay, but sandswimming is still much less costly in energy terms than burrowing, i.e. scraping at the soil and carrying it away to create a tunnel that will last for a while. Of course, you can use a tunnel many times, meaning its cost decreases as you use it more often, in contrast to sandswimming: each trip is as expensive as the next. Unfortunately I could not find any video material of a mole rat sandswimming, so I cannot show you that (the main -but not only!- reason being that such a video might show some sand moving, but not the mole rat underneath...). But if you wish to know more about them, there is at least one nice entry on them in Darren Naish' justly famous Tetrapod Zoology blog.

I did find something else that is interesting for those who wish to design sandswimming animals: how do they breathe? There are two problems here; if breathing involves expanding the chest against the outside world, the sandswimmer is in trouble, as that would require some additional shifting of sand. So you had better design an air pump that only shifts volumes within the body, keeping the external volume unchanged. The second problem is whether the poor sandswimmer can extract enough oxygen from the air between the grains of sand; if it then breathes out, does the air circulate fast enough to get fresh air with the next breath? Perhaps it should suck in air at one end of its body and exhale it at the other (that is what Furahan hexapods do, but not to enable sandswimming). Problems, problems...

You had better make the animal small and give it a low metabolism, so it will not need that much oxygen. Well, someone studied how mole rats breathe (Seymour & Seeley. J Arid Environments 1996; 32: 453-461). The authors did some mathematical modeling and concluded that mammals weighing up to 200 grams could comfortably exist completely encased in loose sand. Mole rats are a lot smaller than that, at 15-40 grams, but that upper limit of about 200 grams does not exactly allow for an impressively large sandworm. Before anyone corrects me, I am aware that Dune's sandworms are supposed to produce oxygen, not use it. But if anyone wishes to create a sandswimmer with a more conventional type of metabolism, this is something to reckon with. 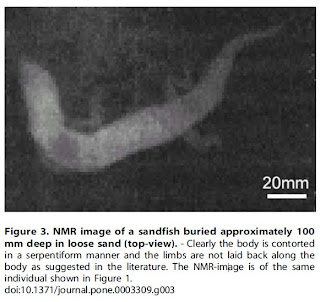 Click to enlarge; Baumgartner et al PLoS One 3(10): e3309. doi:10.1371/journal.pone.0003309
There is much more research going on concerning sandswimming lizards (perhaps they are easier to keep in a terrarium). One species is even called the 'sandfish' (Scincus scincus). Over the last few years people have studied their mechanics and came up with a few interesting results, the main one being how they actually swim. At first there was a notion that they used their small legs to loosen the sand to make it more fluid, allowing them to swim through it by undulating their bodies. These researchers used nuclear magnetic resonance to take a look through the sand. The image above shows such an NMR of a sandfish beneath the surface. As the legend says, the legs are sticking out; but is it at rest or actively moving? 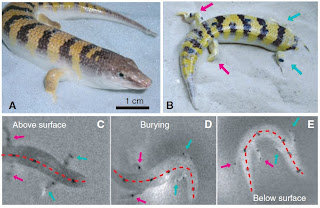 Click to enlarge; Maladen et al. Science 2009; 325: 314-318
Afterwards other researchers went one further and used high-speed x-ray imaging. While diving the animal does use its legs, but while sandswimming it keeps its legs close to its body. Here are some images of how it does so. Above the surface its legs stick out in typical reptilian fashion (C) but they are held back when the animal is swimming (E). The body goes through very pronounced sideways movements in order to move forward a bit; it does not look like an effective means of propulsion at all.

You might think that that is the end of the story, but not so. People actually built a sandswimming robot that undulates just like the sandfish does. That is what the video above shows, along with some more footage of an actual sandfish. There is a nice page at PhysicsCentral with some more data on this particular study.

Compared to a 400 m Sandworm of Dune a 40 gram mole rat or a sandfish lizard are less imposing. Then again, they are real, and I personally find the scientific story of how sandswimming really works just as exciting -in a different way- as a good science fiction story. I can't wait to find out what's next.
Posted by Sigmund Nastrazzurro at 14:20 22 comments:

While thinking of new posts, I finally took some scenes I had prepared much earlier and assembled them. I have tried my hand at making animations before (here and here), but will stop doing so for a while. The program I used to to define plants (XFrog), does not allow for a full wind animation, and without that you cannot really animate natural scenes well. Vue Infinite, the program I used to render scenes, can in fact take care of moving foliage quite well, but its plant editor is sadly not open enough to allow me to define interesting alien plants. That is the main reason that this scene depicts a hot day: there is no wind at all. For fairly obvious reasons there are no animals to speak of, or at least none galloping through the landscape. You will need your imagination for that, I am afraid.

When an animation is lacking in movement it cannot work very well. Then again, I did like the way the 'time lapse' scenes came out, particularly the one in which you see the planet spinning during the night. The direction of movement of the stars (straight up) tells you that we are near the equator.

[Later addition: I guess I did not pay enough attention to logic. In the last scene you see the sun setting at a fairly low angle. If we would really have been near the equator, as suggested by the movement of the stars at night, the sun should dive towards the horizon at a more or less right angle...]


Anyway, here it is. There is a large ballont passing by, and look out, or rather, keep an ear out for splatterbugs at sunset.
There is a larger version on YouTube.

Posted by Sigmund Nastrazzurro at 14:10 8 comments:

The Creatures of Bobby Chiu

It is quite possible that just about everyone with an active interest in paintings of fantastic animals has already seen the work of Bobby Chiu. If not, well, then I am happy to introduce his work to you. It does not really fit that well with what I normally discuss on this blog: I like a hefty dose of science in my creatures, and Mr Chiu's work does not provide that. But I have made exceptions in the past before (for instance here and here). On looking back at the exceptions I realised that I am never much impressed by fire-breathing dragons and aggressive mean-looking monsters. There are plenty of those to be found on covers of books or on Deviant Art, so it is not a lack of availability. Instead, a sense of humour is more important to me, and Mr Chiu's painting have that in abundance. If you wish to have a closer look, here is his own site, and you will also find him on Deviant Art and on the CG society. Or just try 'Bobby Chiu' on Google. 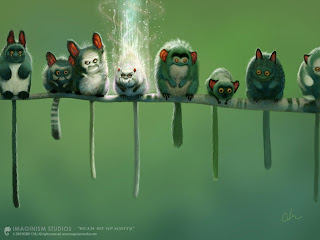 Click to enlarge; copyright Bobby Chiu
Did I mention that he is an incredibly good painter? Just look at the composition of this one. You really have to know what you are doing in order to lay out your subject in this way. 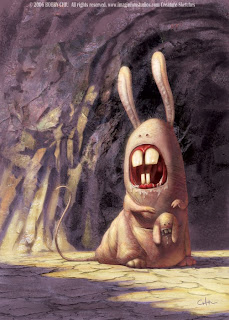 Click to enlarge; copyright Bobby Chiu
A 'Kangamolerat bunny'. I guess the name says a all: bits of kangaroo, naked molerat and bunny. I do not think I have to point to this cutie's dark side. I love the way the light strikes the rock wall behind the bunny. 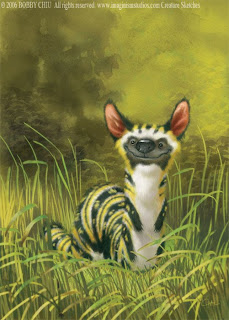 Click to enlarge; copyright Bobby Chiu
A Baterpillar Farret. What else? 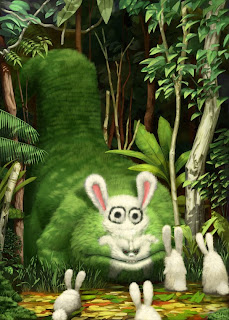 Click to enlarge; copyright Bobby Chiu
And a 'Big Bad Bunny Eater'. Mind you, there is some serious biology here: the real bunnies are obviously attracted by the fake one, so this is a nice example of 'aggressive mimicry'. Mimicry describes the situation where one living species resembles another one for some purpose. It is not camouflage, in which an animal merely tries to blend in with its environment. In defensive mimicry animals may look like more dangerous ones, which stops them from being attacked. But in aggressive mimicry the predator does the trickery, usually by mimicking something the prey is interested in. In this case, you wonder what it is about the fake bunny that so mesmerises the real bunnies? Could it be sexual attraction? It wouldn't be the first time a pair of pretty eyes led a man/bunny to his doom. 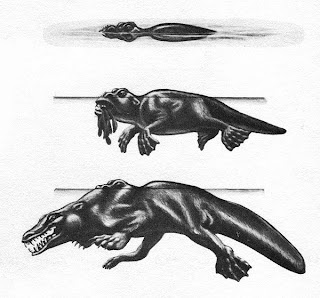 Click to enlarge; copyright Gert van Dijk
All this reminded me that I had once also painted a fictional animal displaying aggressive mimicry. The painting was done when I was about 20, and now, some decades later, it is lost; all I have is a poor black and white image. That is just as well in a way, as I would not dare to compare my painting skills with those of Mr Chiu. But the subject matter does lend itself well to a comparison: somewhat dumb herbivores are lured to a sinister fate by a predator with a cunning plan.

Oddly, both Mr Chiu's predator and mine seem to take a perverse delight in what they are doing. Perhaps there is 'aggressive mimicry' going on at different levels here: the humour hides something sinister, creeping through...
Posted by Sigmund Nastrazzurro at 15:46 5 comments: