Four years on (and back again!)

Four year ago, almost to the day, I started this blog about Furahan Biology and Allied Matters. Over time, the 'allied matters' took precedence over Furahan biology, but the readers did not seem to mind too much. Last February I decided to take a break from blogging for a while. I had found that writing an entry every two weeks was beginning to feel a bit like a load. I think the sabbatical worked, but even I will only know when I start blogging on a regular basis again. I have several interesting subjects in mind, such as animal legs in the recent 'John Carter of Mars' movie or about the colour of plants.

So, what happened to the Furaha project in the last year? Well, I produced several double page spreads. Two dealt with Fishes IV and Fishes V, with five new digital paintings. One spread dealt with a new animal, the 'dandy', a tree dweller with a colourful asymmetric giant claw. I produced three spreads without life forms: two showed the outer and inner planetary systems of Jua (that is the star Nu Phoenicis), and one shows a large atlas-like map. No doubt you would like to see these paintings, but that is not going to happen. After all, all these pages are meant for a 20 to 26 page 'proof of concept' booklet that I can show to publishers, as I wrote last year. The pages look like the sample I showed earlier, right here. My sentiments are that if I cannot sell the idea to a publisher with a worked-out and carefully edited sample like this, I cannot sell it at all. We'll see.

Of course, some pages show older, non-digital work. These do not remain untouched, however. I will show a few images of a work in progress: the prober and bobbuck page. I have no problems with showing it, as you are already familiar with the painting: it is the one at the top of this blog. That image was taken from a photograph; it is remarkably difficult to take decent photographs of paintings: even with digital cameras and tripods the colours are often incorrect, they are not sharp, or not sharp everywhere, etc. To solve that I had all my paintings scanned last year. As some of them are 50x70 cm that required finding a professional scanning service, but it was worth it. I know have digital versions of about 175 dots per cm (120 dots per cm equal 300 dots per inch). 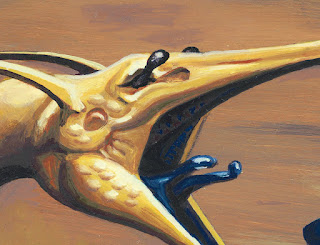 Click to enlarge; copyright Gert van Dijk
Here is an example: this is the head of the prober, taken from the high-resolution scan. Enlarge it to see it at full resolution. The width of this section corresponds to about 65 mm on the real painting, so if you think my painting is rather coarse, take that into consideration. I could of course simply use the scan as such, but I prefer to take advantage of the possibilities that digital painting affords. One reason to do so is that I never considered the biological backgrounds of these creatures when I painted them as thoroughly as I discuss biomechanics in my blog these days. To a large extent the themes developed as I went along, meaning there are some oddities here and there (Well, lots of them, really. For instance, felt that the bobbuck's torso was too short, and that the middle pair of legs would benefit from an idea I developed later: they are further apart than the front and middle pairs. Having painted quite a few Fishes recently, all of which have four eyes, I started wondering why terrestrial hexapods would have lost their lower pair of eyes. Instead, I decide to migrate this pair sideways, giving terrestrial hexapods four eyes. This creates opportunities for visual specialisation as well. I also felt that the eye design need not always involve eyes on stalks, so in may cases the stalks could go.

Click to enlarge; copyright Gert van Dijk
So here is a first step towards the revised painting 'Prober and Bobbuck Mk II'. I selected the animals gave them their own layer, and filled in the background layer roughly. As you see, the bobbuck has already been dissected, and its parts have been rearranged. The eye stalks have gone and the prober has been given a tentative set of new eyes.

Click to enlarge; copyright Gert van Dijk
This is the next stage; the bobbuck's body has been filled in tentatively. Since then I have been thinking about the relative positions of the two animals, but the original one turned out to be best. I will probably alter some more details and smooth some of the brush strokes, but I will have to be careful not to overdo it. Brush strokes have their own charm, and I should be careful not to ruin that by taking the digital element too far. I wonder whether I should revise the prober's beak to include teeth, following a discussion on the bulletin board of the Furaha site of the last few days.

Animals like the prober use their clubs for the heavy work of dismembering a carcass. They have internal teeth and jaws to grind lumps of food, and use their mouths merely to get food inside them. That's why their mouths are like beaks. Still, teeth-analogues are part of their ancestral make-up, and perhaps some tearing and cutting implements would be handy. And so it proceeds...
Posted by Sigmund Nastrazzurro at 14:05 6 comments: