A short while ago I wrote a blog entry on various ways of heavier than air flight. I was amazed to find that the quest to develop tiny mechanical flying machines had generated many intriguing modes of flying, which could be used as the inspiration for speculative life forms. Engineers often lend their ideas from nature, so perhaps the opposite can be done, too. Today, let's have a similar look at lighter than air flight.

I like to use the word 'ballont' as a general term for lighter than air flying forms, and have devoted some attention to ballonts previously, once while discussing Edd Cartier's work, and once in more general terms. Ballonts are generally large; how large they have to be depends largely on the density of the gas they are flying or floating in. The denser the external gas is, and the lighter the gas inside the ballont is, the more you can lift. It is therefore no wonder that most science fiction authors who come up with ballonts drop them in very heavy atmospheres, such as in gas giants. The more I think about it, the more I am convinced that I cannot really get away with ballonts on Furaha. I have made the atmosphere denser than on earth, but it still is no Venus. In the end I will probably have to restrict ballooning lifeforms to small balloons for seed dispersal, and write off the truly large beings altogether. A shame, but what can you do? The laws of physics yield for no one.

Anyway, back to ballonts. My inventions were rather passive, in contrast to the inventions of other inventors, who did not hesitate to turn their creations into actively moving animals. There are even active predators out there. The reason mine were designed as relatively passive animals was that I always worried about the balance between lifting capacity and 'cargo weight'. The 'zeppeloon' on the Furaha site is a good example. In this context, any part of the animal that does not contribute to lifting capacity is cargo: eyes, jaws, a brain, a gut, flippers and muscles to move those flippers. The fewer of those you have, the more likely you can get away with a ballooning design. Besides, how believable are flippers anyway: wouldn't they need to be incredibly powerful to fly against the wind?

Those of my colleagues who design actively moving ballonts seem to prefer manta-like shapes, to the extent that a ballooning manta is now more or less the staple image of science fiction. Man-made balloons use propellors and the like for propulsion, making use of the one invention that is taboo in biomechanics: true rotation. So are there no mechanical manta-like balloons?

As the above video proves, there is one! The German firm Festo seems to revel in amazing biomechanical wonders, and they could not resist making a flying manta balloon. Here is their website. Just click on the various entries saying 'Projekte' to find more gems. Amazing, isn't it? This thing is really flying inside a building, which makes you think that perhaps I am too critical about ballonts: if this thing can fly on earth, couldn't a ballont fly on a terrestrial planet as well? I wonder... But what would a breeze of wind do to it?

The next question is why all my fellow 'exocreators' settled on the manta shape. After all, among swimming lifeform it is not exactly the most common design. In fact, manta shapes form a definite minority. Fishes and squid are the norm in Earth's oceans. So can balloons be propelled in such a way that they resemble the most likely shape, that of a fish?

And once more the answer is yes... This particular film was not derived from Festo, but found on YouTube; here it is on the YouTube site. Once we're at it, some animals swim with flippers. Can you have a balloon propelled by flippers?


Yes, you can, and Festo did it, with their 'air penguin'.

And an 'air jellyfish'? No problem for the people at Festo.

Enough for today, I should think. My conclusion is that there is no need to shape ballonts as manta's. I rather like the 'air jellyfish' design. For those who want yet more, there is an intriguing clip on YouTube showing a balloon lifting a young woman strapped underneath. She moves about with wings attached to her arms in a hangar. As the commentary rightly says, what would happen in a breeze? I guess that the rather neat idea illustrates the limits of ballooning on a terrestrial world...
Posted by Sigmund Nastrazzurro at 13:09 No comments:

Look what happened! A good deed never goes unrewarded, some say, or unpunished, as other with a more cynical disposition would say. In this case, we're definitely dealing with the first possibility. So what happened?

Well, there I was, trying to relax a bit and not working all the time, and so I devoted one of my latest blog entries to my amateur efforts at modelling something in 3D with ZBrush. In the post, I mentioned that, in contrast to me, there are also those who really know how to do 3D modelling: the people who also featured in the 'South of Brussels' post and its sequels.

Well. Marc Boulay and Sylvia Lorrain, with whom I have had pleasant email conversations, contacted me and said they would like to have a go at one of my Furahan creatures. I of course accepted gladly, sent them a list, and they chose the bulchouk.

The 'bulchouk', in case you did not know (and how could you?) is the species depicted on the cover of the "Field Guide to Furahan Avians' (just go to the books section of my website, and you will find it. It's a tetrapterate, or a hexapod-derived flying animal with a wing pattern I wrote about a few weeks ago. 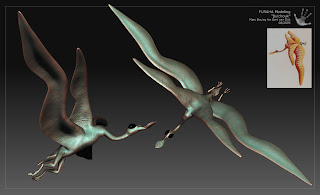 Click to enlarge
© Marc Boulay / Sylvia Lorrain / Gert van Dijk
But now, without further ado, Marc Boulay's 3D ZBrush version of the bulchouk. The next stage is hopefully that Sylvia Lorrain will texture it. I am very happy with it; isn't it great?
Posted by Sigmund Nastrazzurro at 21:58 1 comment: