Over the last few weeks I have asked for other projects dealing with fictional biology. One project wasn't mentioned much, possibly because most readers interested in this kind of thing know of it already, and assumed others did as well. I am talking about the 'Epona project'. At the time, and this is about 1994, it was without a doubt the largest project of its kind, involving the most people. That may no longer be the case, but what many people may not know is that the little that can be found on the Internet only hints at the enormous amount of material accumulated. It did receive its share of the limelight: for instance, there was a session at a World Science Fiction Convention in Glasgow (1994 if I remember correctly), and it made the cover of Analog in November 1996, with a story set in the Epona universe as well as an essay of the scientific backgrounds, by Wolf Read). At present the Epona project seems to be fading out of the public eye, which is a pity. 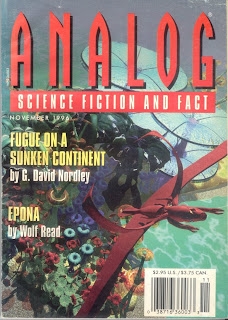 Click to enlarge
Cover of Analog, November 1996.
The animal flying in the foreground is an uther, Epona's sophont.

The project started from a 'Contact Conference', in which one group of people had to come up with alien intelligence, building up the attitude of the aliens from their biological background. Another group played the role of human explorers, and then there is contact. Read more about the Contact conferences here; you will also find some information regarding Epona there.

It grew from there. What made it unique was that it started with a planetary system, devised by Martyn Fogg (who later was kind enough to design Furaha's solar system about one year ago, as an aside for his PhD studies on solar system formation). The planet's geology came next, and the biology built directly on that. I will not mention all names of the 31 people formally involved in the project. You can find their names and much more on the website of the Epona Project. The site looks its age, but is still quite interesting. The thing is that life on land on Epona is only 10 million years old. Oddly, Epona is an old planet, and life there has existed for far longer than it has on Earth. So why hasn't life colonised the land before? Well, it has, and not just once but many times. It died out as many times afterwards.

The reason for this curious phenomenon, which I think is brilliant, is that the planet's system of continental drift has come to a virtual standstill: the planet is losing heat due to old age, and the crust is solidifying. The lack of continuous volcanism ensures that CO2 levels gradually drop, causing the roof of the greenhouse to be opened, so to speak. It gets colder and colder, and life on land is impoverished until it gets to the dead or boring stages.

But every once in a while, say 100 million years, the crust convulses in a gargantuan volcanic shudder, spewing out enormous amounts of CO2. That creates an instant greenhouse effect: the glaciers retreat to the poles, and life crawls onto the beach once more. That is the setting of Epona at present. The last 10 million years have seen an outburst of adaptive radiation of life on land, filling it with an array of forms that at times look maladaptive and at other times look very fit indeed.

It is a pity that the website doesn't show you much of the wildlife that was devised there. Luckily, more can be found on the site of Steven Hanly, who, along with Wolf Read, did many illustrations. I will show a few here, with his permission (there are more on his site!). Looking at them now make you realise the enormous strides computer graphics has made in the last 15 years. The images on Steven's site date from that period, and were among the best that a nonprofessional could then hope to achieve. 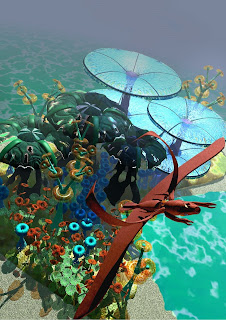 Click to enlarge
First, here is the image on Analog's cover, but larger and uncluttered 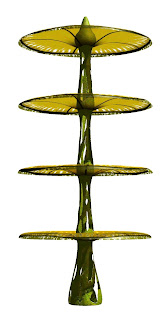 Click to enlarge
Next, a single pagoda tree. Note that is has a fairly simple build. Life hasn't evolved anything like wood yet, so the stems are herbaceous in nature. 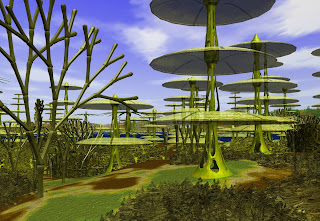 Click to enlarge
A view of a landscape, with more pagoda's. 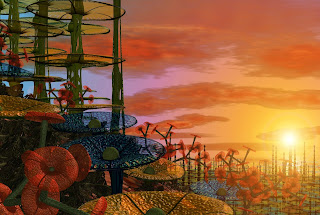 Click to enlarge
A beautiful sunset view
So that's Epona. I do have more material on Epona's lifeforms, and will perhaps show some of it here later. But not everything about Epona is in the past. Together with Steven Hanly I have been trying to see whether we could produce some new images of Epona. Here is a test render done in Vue Infinite. It doesn't show many different species yet, but it is a beginning... 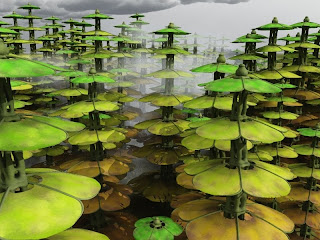 Click to enlarge
Test render of some 2009 pagoda trees
Posted by Sigmund Nastrazzurro at 16:34

I stand corrected. It was indeed 'Intersection' in Glasgow in 1995, and I held a lecture on Furaha life there (unscheduled, but I was proud anyway).

Excellent post. I have always been interested in Epona, but could never find any resources on it. Thank you.