How much more Speculative Biology is there? II

Thanks to those who took the time to help prepare a list of other fictional biology systems. I will use the results to update the list of links on my Furaha page. I had hoped that there might be new worlds completely unknown to me, but so far it seems as if we have all found the same sites. Perhaps there is something interesting going on in Japan or China. If there is, please let me know!

Josh was quite right about the beast I showed last time: it is indeed a shallow-beaked Grogan from Venus. You can find it, and three others like it, on the website of the inimitable Dr. Grordbort. 'Dr Grordbort' is a steampunk subsidiary from Weta in New Zealand, the people famous for the special effects in King Kong, The Lord of the Rings, etc. Should you wish to, you can buy marvellous ray guns in steampunk fashion from Weta (although you may find them to be a trifle costly).

Last time I had erased the name of the shallow beaked Grogan from the image, as that would make it a bit too easy. To rectify that, here it is again. I cannot make out the name of the artist, which is a pity, as I would like to give credit where it is due. If you look at the other animals on the site, the number of legs seems to vary. The Grogan seems to have six originally, and the middle one is split halfway. Arthropods on Earth can have a biramous leg design, with one branch forming the walking leg and the other part can be something else, such as a gill. But the split occurs then very close to the body, so the two branches are completely separated mechanically. In the Grogan's case, the split occurs halfway down, which doesn't seem very handy, as the top branch, that seems to be there to grasp things, would wobble along when the animal walks. Still, the grasping legs are intriguing: could this be a Venusian example of Centaurism? (discussed here and here). The neck looks odd as well, but could work, I think. 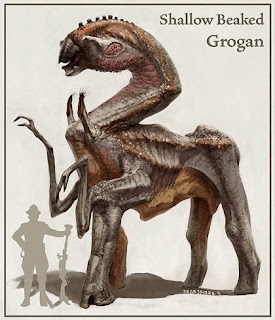 Next, a lively image of a Grogan hunt. Steampunk adventurers don't go in for conservation, it seems, but prefer to view wildlife lined up in their sights. What ho! 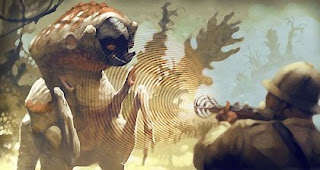 By the way, a Weta is a large New Zealand insect. If you care to look closely at them, you will see has a pair of appendages at their rear end: cerci. In my musings on Centaurism, I wondered whether centaurism occur on the hind end of animals as well. StevenH came up with the earwig, with a pincer at its rear end. Wikipedia treats cerci as being derived legs, so, if that is true, there is 'posterior centaurism' as well. How nice to bring two threads together.

In the hope of uncovering unknown fictional biology from Japan or wherever, I repeat my question to let me know of any unknown worlds. Again, I will whet the appetite asking you for the source of the following image. It's from Weta, but you have to be more specific than that. 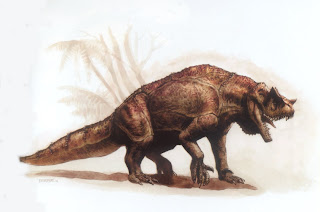 That terror is Tattarusarus saevus. A large coastal predator from Skull Island.

Here it is - one Japanese thing...
http://www.geocities.co.jp/NatureLand/5218/
Do you know Japanese to read it?

Josh: you are making a habit of this...

Pavel: Thanks. I do not speak or read Japanese, but Google helps translate languages, up to a point. The results look strange, but make more sense of Japanese than I can without Google. Using Google's services I found two links at the bottom of the site you mentioned that contain fictional biology.

Here's one: http://www.geocities.jp/opabinimaniaj/
It seems to be centred around Opabinia, but the other animals are fictional. The other link leads to a forum with a few drawings.

I clicked on the picture, and the URL address said "Kong", which might help. :)

As to centaurism, I found this in the book 'The Smaller Majority' by Piotr Naskrecki -
"The second pair of legs of ricinuleid Ricinoides afzelii is enlarged and probably used in combat with other members of its species."

...which gave me this idea: whip scorpions use their first pair of legs as antennae; since true scorpions's first legs are already specialized, might any antennae-zation(?) utilize the second pair of legs instead?

So your saying that I should let someone else have a chance.

?
never said that. just to be careful clicking on the images.

There may be misunderstandings in the making here.

I think Josh was right on the mark both times, which is good. And Rodlox is right in pinting out that labeling the image 'kong' and then asking where it was from certainly made the question rather less difficult than I intended it to be...

yeah, sorry rodlox, that wasn't directed at you. I was just being cheeky.

no worries, Josh. my confusion gets overwhelming for even me.

I have a link that might be of interest to you. I haven't seen any mention of this author by you, so:

Part of the artist's official website, that gallery contains some of the paintings from the Book 'Expedition', on which the Discovery Channel special 'Alien Planet' was loosely based.

Alberto: thank you for the suggestion. I do know Barlowe's work, and have most if not all of his books. I still have to update a list on my site. The reasons for not mentioning Barlowe much are that he is already well-known, and, secondly, much as I admire his painting skills, I do have many reservations regarding how plausible his creations are from a biological point of view.