I needed a background for a painting.

Every chapter in The Book at present starts with a double page showing a painting supposedly made by someone in the Furaha Universe. These paintings are all about humans on Furaha. Some are portraits of dignitaries, whose illustrious career earned them the privilege of forever having their countenance grace the Halls of Academia. Or, of course, until someone else comes along with even more vanity and money. Such portraits do not need much in the way of background; a generous helping of 'Van Dyke Brown' will do. But other paintings show Field Work, often in a much-romanticised version, and those are the ones that need a background showing some Furahan Biology. This one starts with wadudu.

‘Wadudu’, as astute readers may remember, are small Furahan animals, somewhat resembling insects. If not, see here and here. Some wadudu may be communal species and build their own living arrangements, like termite mounds. Some early doodles of possible wadudu castles are shown above: these are ‘Mark I Castles’. The sketches show roof-like outcroppings or ridges along their surface, with a vague idea that they could protect the structure against the sun, or perhaps against rainfall or even snow. Termites are limited to hot regions, but there is no reason to apply that rule to wadudu castles too.

I made a quick colour sketch of one design, shown above. This ‘Mark II Castle’ is not that different from a 'Mark I'; it has an elongated shape and is bilaterally symmetrical. The narrow side points towards the sun during the hottest times of the day, to limit the surface area that is directly insolated. The rootlike structures running along the ground are hollow cylinders that function as highways allowing the beasties inside easy access to wherever they need to go. Different castles may be connected by such cylinders, both on the ground and below it, allowing communities to link up and form even larger superorganisms. The overhanging roofs were smooth and white, to reflect sunlight and to protect the castle from heating up too much. 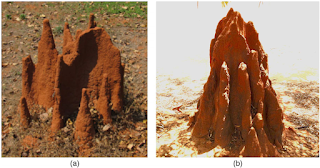 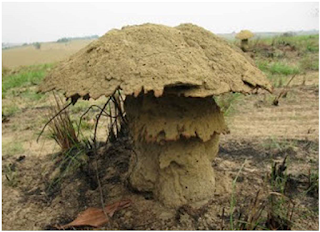 The wadudu would have to produce different materials for that to work, so I had a look at Earth's termites. It turns out that termite mounds can have very different shapes (see above). The paper I copied the images from (Claggett et al DOI: 10.1061/(ASCE)ST.1943-541X.0002043) differentiated between conical, dome, cathedral, mushroom and meridian or compass mounds. The differences depend on differing circumstances and requirements to control temperature, humidity and ventilation.

It runs out that termites indeed alter the soil they use to build their mounds with. Termites use grains of sand or other materials and saliva to form 'boluses' that are then cemented together. They may use coarse granules in the centre of walls, and finer ones for wall surfaces. The termites can even mix clay in the boluses to provide water-resistant walls. With all this going on, it would not be a stretch to provide Furahan wadudu with equal or better capabilities to produce different materials, from watertight layers to highly reflective ones. That opens up some really interesting possibilities, so I think I will return to wadudu castles in the future.

The bilateral symmetry of the Mark II may not have been optimal. For most places on Earth, the sun will never be directly overhead. The axial tilt of Earth ensures that the sun will generally be towards the South if you are on the Northern hemisphere, and vice versa. This means that a sun shade does not have to be symmetrical in the North-South direction. The smart way would be build a shade that is angled in accordance with the direction of the sun, something that will depend on the latitude (and the rotation of the planet's axis). This is very similar to the way solar panels are positioned. Solar panels absorb light, but the shades should reflect as much of it as possible. They should be smooth and as reflective as possible; a glaring white would be nice. Depending on the climate, the nights might be cold, and in that case part of the castle could welcome the sun's rays early in the morning. That part could even be dark so the castle can warm up. The structure at the opposite end would catch the last rays of the setting sun, so you might think that the castle could do with some warming up before the night. Possibly; I assumed that the castle would warm up during the day regardless of the shades, so the roofs may need to protect against the evening sun too. The roofs could bend down towards the direction of the setting sun to do just that.

I sculpted such a Mark III castle in ZBrush: here it is, shown from several points of view to highlight its asymmetrical shape. Instead of one roof, it has several. Imagine that it is about 3 meters high. The roofs should be white, whereas the rest of the structure will probably have the colour of the sand it is built from.

The videos above show such a castle. Unfortunately, I could not colour it correctly for the video. I wished to show how it looks while the sun moves from sunrise to sunset in one smooth movement, but that did not work well. I had defined a few positions for the sun, but the software treated them like stops on a train ride: the sun now reaches a place, stops ('all aboard!') , and departs for the next place. I should do it again, but the point was to produce a painting, not a video. And I can now paint that background.

By now you will probably be wondering what the castle builders look like. Actually, I don't know yet. I haven't yet decided whether they the castles are built by wadudu, spidrids, or by another group altogether. Shouldn't I have decided that before I designed the castles? I think not: I doubt that anyone could deduce termite anatomy by studying a termite mound, other than that the builders are small, can move grains of sand around and stick them together. That'll do for now.

Posted by Sigmund Nastrazzurro at 10:20 11 comments: