No time this fortnight to write anything elaborate, unfortunately. Some posts take much more time than others. The ones that take most time are those that require checking the physical aspect of some matters, not just because finding sources and digesting the content takes time, but usually also because I then need to do some programming of my own or I have to make some specific illustrations. In short, the heavy science bits take a lot of time. Over the years I have written quite a few words on such subjects, and I started wondering whether I should perhaps bundle them, work them over, write some new chapters, and produce a book on the biomechanics of alien life. Something like 'Darwinian creativity in a Newtonian Universe'. The title is probably much too enigmatic for the book to sell, but perhaps it could be a subtitle. Mind you, it would be completely separate from the Furaha book. But would anyone buy it? Let me hear what you think.

Anyone, I have been working on an update of the marblebill. I showed you another such update once before, and the marblebill is on the Furaha website but featured previously on this blog as well. You may recognise some general update principles. The eyes on stalks are now less prominent, but certainly still occur in various species. There is also eye specialisation. The images below are taken from the sculpting program Sculptris, a free programme I recommend unreservedly. 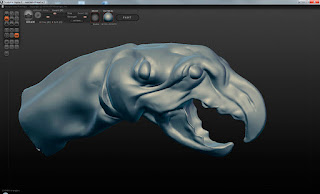 Click to enlarge; copyright Gert van Dijk
The marblebill is an arboreal brachiating predator, and has two forward facing eyes to help it judge distances and fixate its prey. As is the case for dragonflies, the size of the ommatidia (the individual eyelets in a compound eye) depends on where you are in the eye: they are smaller in the part of the eye facing directly forward. This increases visual resolution at the price of sensitivity to light. The marblebill is a diurnal creature, which makes sense I think: you would need impossibly good vision to allow an animal to hurl itself from branch to branch at high speed at night. 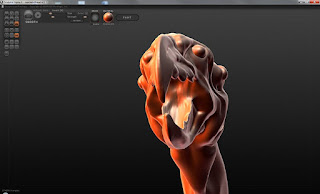 Click to enlarge; copyright Gert van Dijk
There is another pair of eyes, the 'oculi posteriores'. Note that these were not posteriorly placed in ancestral hexapods, whose four eyes were placed around the head. What became the anterior eyes were once the bottom ones, and the posterior ones are the former upper ones. Anyway, in the marblebill lineage the upper ones, alresdy in the posterior position, over time migrated outwards, providing an all around vision, not just in the horizontal but in the vertical plane as well. For an animal living in three dimensions this is more important than for a grazing animal. One result is that it would not be easy to sneak up on a marblebill. Not that there is any other predator up there in the trees that would perform such sneakish acts anyway: it would be too dangerous. The marblebill also does not need much vertical vision for its territorial disputes, as these involve no sneaking whatsoever, but are announced frighteningly loudly. But detecting prey is another matter, and for that these eyes are superb. 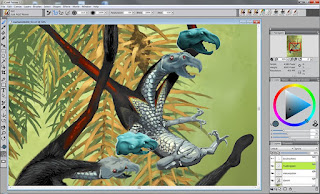 Click to enlarge; copyright Gert van Dijk
Here is the painting in progress. I used to work out perspective and draw everything completely without any aid except for the occasional ruler, but I now make use of what the digital age has to offer. So I exported the sculpted head into Vue infinite, made certain the lighting came from the correct direction, adjusted the perspective angle and produced two renders. Cut out the head, place them on a separate layer in Painter 12 (to be deleted later), and everything is in place to start painting. Now all I need is the time to do so...

Posted by Sigmund Nastrazzurro at 10:53 15 comments:

Why sight is superior to echolocation

In the previous post some characteristics of echolocation were discussed, and the results were somewhat worrying as far as a comparison with vision is concerned: echolocation involves 'shouting to hear a whisper', meaning that its range is limited and the sender is loudly proclaiming its presence. 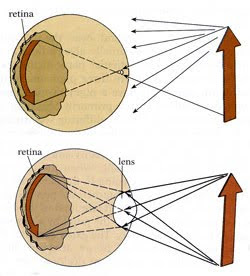 Optics of pinhole and lens eyes. Source here
In my opinion there are two other major difficulties with echolocation that favour vision. The first is the ability to locate objects: with eyes such as ours it is very easy to locate objects. Rays of light can be bent by lenses and can reflect from surfaces, but in between they follow nice straight lines. That is the reason why even a simple pinhole camera such as in the image above will produce a good image: any particular point on the retina can only be lit be rays coming from a direction specific to that point. Such a pinhole will not let much light in, and solving that by increasing the pupil will blur the image. If you put in a lens you can have a large pupil for lots of light with a sharp image. Problem solved. The point of all this is that seeing an object is almost the same as knowing where it is. 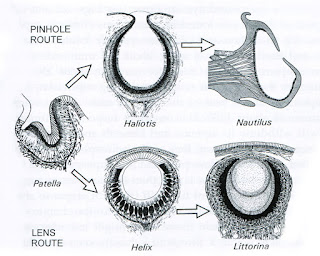 From: Animal Eyes (2nd Ed.), Oxford; copyright Land & Nilsson
Above you see an image of lineages of eye design, leading to pinhole eyes and eyes with lenses. Those who wish to read more about eye evolution should read the new edition of Land and Nilsson's 'Animal Eyes'. It also describes the very high number of eye designs (there are even eyes based on mirrors!). Another very nice book is Evolution's Witness, with hardly any physics but boasting numerous examples of wonderful eye designs. 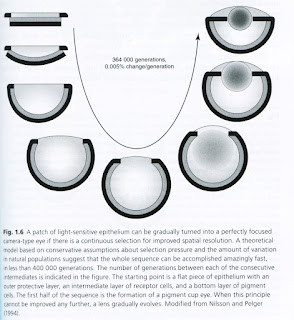 From: Animal Eyes (2nd Ed.), Oxford; copyright Land & Nilsson
In 1994 Nilsson and Pelger calculated that a good camera eye with a retina and a lens could evolve from basic elements without any localizing ability in fewer than half a million generations. With one generation a year this amounts to a geological blink of an eye (sorry for that one), meaning just half a million years. Vision can apparently evolve so quickly and conveys such a large advantage that some say it explains the runaway evolution known as the Cambrian explosion. In a very short time things such as armour, speed and vision evolved. Giving animals an unobtrusive ability for precise long-range sensing may just have been the impetus to start this accelerated runaway evolution: claws, shells, teeth and brains co-evolved quickly. Perhaps vision was not the only factor jump-starting the process, but the idea is too powerful to ignore a role for vision altogether, I think. It is tempting to think that most planets with complex life would have their own 'Cambrian Explosion' in the early evolution of complex animals. Of course, the label 'Cambrian' would not apply on Furaha, Snaiad, Nereus, nor on real exoplanets. We need a more general name for the phenomenon; how about the 'Sight Spark'? (and if it sticks can I copyright it?).

Seeing how a pinhole eye is simple and works well, how about evolving a 'pinhole ear'? Suppose we place lots of microphones on the inside of a sphere and cut a hole in front of the sphere to let sound in. Wouldn't each microphone only pick up sound from the bit of the world it 'sees' through the opening? If so, we would have an ear with perfect localising ability. Alas, no. Sound does not travel in neat straight lines but travels around corners. You can hear people talking through an open door even when you cannot see them. 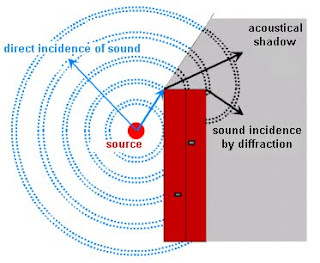 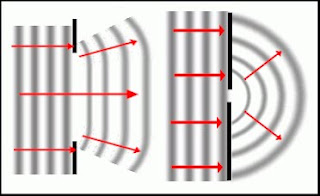 How the size of an opening affects diffraction of sound. Source here.
When sound waves hit objects, those interfaces form new sound sources, a process called diffraction. In the misbegotten 'pinhole ear' idea, the 'pupil' would simply act as a new sound source, so all microphones on the 'retina' would receive sounds from all directions. As a location device this would be utterly useless.

The physical reason why sound bends around corners and light does is not that diffraction is limited to sound. But in fact diffraction affects light and hence vision too. The effects of diffraction depend on wave length, and the wave lengths of sound have a range of a few cm to 15 or more meters; those of light are measured in micrometers. The diffraction of light is seen at microscopic scales, but that of sound occurs at the scale we live in, that of doors and people.

So the physics of sound conspire against it providing an easy way to tell where a sound is coming from. Evolution solved that problem as it did others, but the solution requires combining the signals from two ears (I know that using two eyes improves distance detection, but you can do it with one eye, and locating the direction of an object needs just one eye). Tiny differences in arrival time of a sound at two ears allow a suitable brain to calculate the direction of the source of a sound in the plane of the ears, but not whether it is to the front or the back nor up or down. Finding out things like that call for ingenious trickery such as tilting heads or complexly shaped outer ears that subtly change the characteristics of a sound depending on where it is. Wikipedia has a nice article on the subject. Some animals (owls!) perfected the art of sound location, but theirs is a small niche compared to the ubiquity of good camera eyes.

An unfair advantage of sight over echolocation

I wrote above that I thought there were two more difficulties with echolocation. The second one is based on the fact that echolocating animals have to produce their own signal, limiting the range at which they can detect anything. How about vision? There was an omission in the discussion, and it is a glaring one: the sun! (sorry about that one too). Sunlight, free for all and there regardless of whether anything of anyone is using it, is what allows vision to work as a long range sense. Compared to echolocation this free gift to sight is not really fair.

Copyright Gert van Dijk
The images above were made for the previous post: the right one showed what echolocation might be like, with some energy coming from the 'camera', only illuminating objects close by. Compare that to the left image, a visual scene lit by the much more powerful sun.

But vision is not always available, and echolocation has a chance when there is no light. On rotating planets like ours, sunlight is only available for half the time, so the night would seem a good time for animals to start echolocating. But that is not the case; most animals prefer to more or less shut down at night. In previous discussions on when echolocation would be better than vision some dieas came up: caves, planets with permanent fog, planets without suns and seas underneath ice caps. One region seemed to have been forgotten though: the deep dark seas, where the sun does not reach. Shouldn't they be filled with echolocating animals, squeaking and pinging away? For Earth whales, the ocean floor may be too deep to reach, but fish were there a long time before the first whale ancestor took its first dive. Why are there no echolocating fish? I asked experts, but they did not know either. Fish have suitable ears and brains, and nothing seems to stand in the way of them evolving echolocation. But they have not. Or is echolocation simply too much like a burglar who enters a silent dark house and then starts shouting 'Hellooo!'? I do not know.

However, I do know of one final twist in the comparison of echolocation and vision; but I will keep that for the last post on this subject...
Posted by Sigmund Nastrazzurro at 11:21 12 comments: