Furaha in the Science Section of NRC Handelsblad

Well, when I came back from travelling abroad I found that 'NRC Handelsblad' had indeed devoted ample room to the Furaha project. 'NRC', as it is known, is a Dutch quality national newspaper. The weekend edition has a 12 page science supplement, and this weekend's supplement had three pages on Furaha: the cover and the spread in the middle.

I am afraid I cannot direct you to the relevant pages on the internet to have a look for yourselves, as these are open only to paying customers. Those with subscriptions can download a good quality pdf file. I have a subscription and have the download, but will not publish it here. After all, the newspaper is supposed to make money. Then again, at some point in the future I may yet do so after conferring with the newspaper people. For similar reasons the images below will give you an idea what the article looks like but not in enough detail to read it. Most of you would be unable to read it anyway, it being in Dutch, my native language. It is a very nice article, written by Lucas Brouwers, who also writes a blog -in English- on evolutionary biology.

Here is the cover. I took it from the digital edition, meaning the contrast is much better than in the printed edition, and the colours are also closer to those of the original. 'Wetenschap' means 'science'. (The two words may not overlap entirely. The English version of Wikipedia has a nice entry of the meaning of the word science: "Over the course of the 19th century, the word "science" became increasingly associated with the disciplined study of the natural world including physics, chemistry, geology and biology. This sometimes left the study of human thought and society in a linguistic limbo". In Dutch 'wetenschap' seems to used in the latter broad sense more often than in the narrow one). 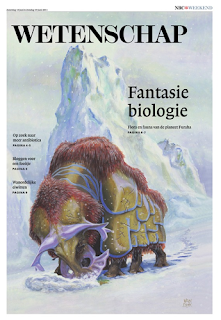 Click to enlarge; copyright NRC / Gert van Dijk
Anyway, this is the 'woolly-haired shuffler', that can also be found on the Furaha site; it also featured in the Furaha blog when I first posted it on the main site. The name is a correct translation from the Dutch 'wolharige schoffelaar'. In both languages the adjective 'woolly-haired' was of course taken from the name of the 'woolly-haired mammoth', a name I have always considered as odd as it is funny. I do not think there are other animals, extant or extinct, whose name expresses a quality of their pelt. I have never heard of the 'silken-haired panther' or the 'greasy-pelted otter'; perhaps in poor prose, but not in an animal's name. The text of the paper uses 'wolharige schoffelaar' as intended, but the headline, after translation, reads 'Hairy shufflers and radial flyers'. Newspaper headlines are often written by other people than those who write the body of a text, for reasons unknown to me. Perhaps there was not enough room for the full name, but now the name states that the animal is particularly hairy and it is not... 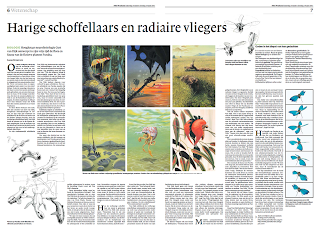 Click to enlarge; copyright NRC / Gert van Dijk
And this is the inner spread. Regular readers will recognise most images. Two have not been published on the site though, eroding my store of fresh images a bit more. Mind you, the text does not go into what they are or why they look the way they do, so some mystery remains.

You might wonder why a science section of a serious newspaper devoted three pages to a speculative biology project, and that was what I asked the journalist before the interview. He answered that neither he nor his colleagues had any trouble with a mixture of solid science with creative and less factual matters. I am glad of that. Science is too often treated by scientists and others as if it is so serious that you should speak only about it with a straight face and in hushed tones. Well, without creativity science would not only simply not work but would be nothing more than drudgery. I hold similar views about the speculative side of matters, where I prefer to see a mixture as well: fantasy is not the same as idiocy. The best of science fiction is characterised by a 'sense of wonder' as well as a 'what if?' attitude. You cannot do science without them.
Posted by Sigmund Nastrazzurro at 13:56 7 comments:

That won't mean anything to most readers...

But I am talking about a leading high-quality Dutch newspaper, and if everything goes well they will devote quite a bit of attention to the Furaha project in next Saturday's edition.

The nice thing about computer animation is that it allows you to actually see thing that you could only dimly imagine beforehand. One image that has been sitting in my mind for many years is the following: you see a dusty plain, and a herd of handlebars (Latifrons imperator) come galloping in from the right hand side of the image in the distance, and then wheel towards the viewer as if they were performing a well-rehearsed cavalry manoeuvre. I can almost hear them too...

Unfortunately I do not see anyone spending a small fortune to make this a reality, so I will have to content myself with what I can do myself, with my PC, at home. Some visions therefore remain locked in my head, but a few more modest ones do find their way out. Making tetropter flight visible is something I thought I worked on for quite some time; today I can show you a near-final result. Near final, because nothing creative is ever truly finished. In this case, the camera should move, the animals should vibrate in rhythm with the wing beats, there should be more details, there should be motion blur, and there absolutely has to be blurring to mimic a limited depth of field and through that create the illusion of small size.

Still, what I can show you is the principle of the thing. It's not a movie, but an illustration of wing movement in slow motion. Tetropters have been described several times on my blog. A summary of the tasks involved in animating them is found here, and entries on their design and wing movement patterns are here, here and here. In short, they are radial flying animals, whose four wings can do a 'double clap and fling', invented by yours truly, and later also by other people in the flying robot business. By the way, the movement of tetropter wings is not all that different from the complex way in which Earth insects move their wings.

This is an animated scheme to show how it all works: the wings are planes that are warped as they cycle through their movement cycle, so their shape is different depending on were they are. Where they are is governed by rotations along the x-, y- and z-axes, and all these paths can be altered and edited. The Matlab programs that do all this in the end write lots of 'obj' files: those are files describing 3D shapes; one is produced for each wing for each frame of the cycle (there are usually 120 frames in a cycle). A script written in Python then loads in a scene containing a body shape without wings in Vue Infinite, adds the appropriate wings per frame and stores the images. These are then used to form an animation, and those are what you see here.
The 3D shapes of the wings consist of 1600 small triangles, which is more than enough to show supple movement. As they are they do not look like wings at all, but there is another trick to take care of that.

The trick in question is to add transparency and colour. The transparency mainly makes unintersting parts invisible, but it is also useful to make the wing itself partly transparent as here. To create the fly-like animal above (Bombilator musca) I used an image of a real insect wing found on the internet, and used that to create a transparency mask. All of a sudden, the boring rectangular 'wings' produced by the Matlab program take on a biological appearance. Please do not look too closely at the body of the animal: it is a simple shape cobbled together in Vue. As you can see the animal has four legs and two sets of eyes: upper ones, presumably to scan for danger, and lower ones, near the food gathering end at the bottom.

A bit of colour makes a lot of difference, so here is a farfalloid, resembling a butterfly in overall appearance (Farfallapter caeruleus). Indeed, I stole its wings from a real Earth butterfly, albeit with some warping and editing. Mind you, quite a bit is lost in the conversion process. 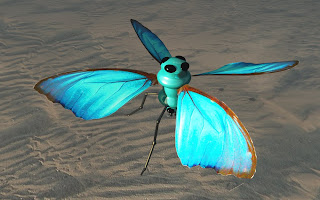 Click to enlarge; copyright Gert van Dijk
To show that, here is a still of the Farfallapter; better, isn't it? Then again, you can see how crudely the wing is linked with the body...

I guess I now no longer have any excuse to put off work on the 'Flying with...' page. It is probably also time to redesign the site. I have already looked at that, but the days where you could learn HTML in two evenings seem to have gone for good.
Posted by Sigmund Nastrazzurro at 17:32 5 comments: