Trying to sculpt a dinosaur (Sauropelta)

This blog and the Furaha project are about speculative biology, so there is no reason to talk about dinosaurs. Then again, you could argue that there are so many unknowns in palaeontology that it is to a large extent a speculative discipline.

Anyway, I decided to sculpt a dinosaur with polymer clay. Why polymer clay? It is perfectly possible to sculpt digitally, with more detail, and cleaner too. I do so habitually to help me decide on shapes and perspective. And if I would want a physical object, I can order a 3D print. But physical sculpting has its own rewards, and sometimes I would like to have a nice statuette of a rusp or another Furahan animal.

Why a dinosaur and not a rusp? In the distant past I had used 'Fimo' and 'Das' to sculpt animals, but I was never satisfied with the ease of use or the level of detail. Still, I kept an eye on what people did with Sculpey and similar materials. There are people on YouTube, such as 'Kayakasaurus', who make very nice dinosaurs in polymer clay. I thought that my first attempt would probably not be very good, so I chose something I did not care about that much, which may sound strange. But anyway, that is why I chose a dinosaur. Perhaps foolishly, I chose a material that looked interesting but for which there were not many didactic video's: Cosclay. That is a polymer clay that after baking was supposed to stay flexible, allowing very thin parts without risk of breaking. The video shows that this was indeed the case.

The video above shows the result of that experiment. I have also uploaded a version with better resolution to YouTube.

I will leave it to you whether the attempt was successful or not. Among the things I learned was that I need to have much better control over details, and that means I need a working environment with better light and preferably a magnifying glass.

The working method was copied from YouTube videos. I started with a nice skeletal drawing by Gregory Paul, from his excellent book 'The Princeton Field Guide on Dinosaurs'. In spite of the title, it is not a Field Guide; how many field guides preferentially show animal skeletons?

Here is a drawing of a Sauropelta skeleton from that book. I used the trick of printing a scanned image on the desired size, so I would end up with a roughly 1:16 scale model: the model is about 25 cm, half of which is tail. 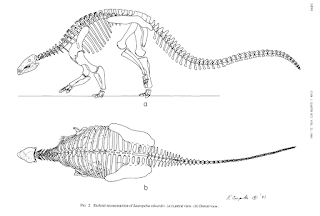 I also had a quick look at some published papers on Sauropelta. Above you see drawings from a formal 1984 paper. Compare the posture and the length of the spikes to the drawing by Paul. The fossils may not have changed much, but the reconstructions certainly do. What I like about the 1984 paper is the emphasis on how close the left and right feet are to one another. I tried to do that in the model, but probably still used too large a distance.

And here is a recent drawing of the Sauropelta skin bones that form the large back shield (the 'pelta') . I only found it after I had already baked the final model, so the shield bones on my version are much too big. An accurate dinosaur model would require a large amount of study. Looking at other reconstructions makes me think that most reconstructions rest more on speculation than on science. Mine included!

But at least I think I am ready for a rusp sculpt now. But first, more painting, and perhaps a stegosaur sculpt, just to be certain.