After almost four years of writing posts for this blog it is time for a sabbatical. There are certainly enough subjects left to write about. For instance, there is the issue whether established echolocation can prevent eye evolution taking off (I think not), as well as more on eyes, issues on flight, on camouflage, etc. I find writing posts and interacting with those who react (thank you all!) most enjoyable. It is just there are things I need to take care of, and the blogging batteries need recharging. I do not know when I will resume writing, but a nice time to do so would be sometime around the blog's fourth birthday (that's in April, in case you wonder). That is not a definite promise though.

This does not mean that the Furaha project is in any danger. After 30 years I am not going to drop it now. Far from it, in fact: I intend to devote part of the time I have spent blogging on painting. There's lots of things to do.

As proof that the project is very much alive, I can tell you that Furaha will appear in a film that you can actually see in a cinema. The film is being produced by an independent company and is being shot right now. I cannot say too much about it, but it is not a documentary; it will be about people, right here on Earth, and the Furaha project plays a very interesting role.

The producer recently asked me to make -with two days notice, but such things always seem to work that way- a 3D model of my woolly-haired shuffler, an animal that they had seen in my newspaper interview (here and here). and so I loaded Sculptris, a program I wrote about earlier, and started making one. Sculptris is completely free and a joy to work with. The resulting model is certainly not perfect, but for someone like me with limited experience with digital 3D sculpting programs it did not turn out too bad, I think. Particularly if you consider that this was done in about four hours of time... 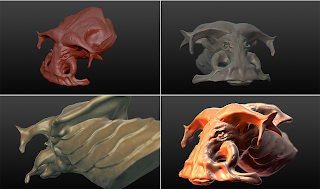 Click to enlarge; copyright Gert van Dijk
Here are some screen shots of Sculptris with the model in various colours. It was a bit difficult to get the lateral jaws in there, as Sculptris does not formally accept holes. What i did was to push two extrusions together and then I flattened them where they toch one another. Formally, there are no holes in the model...

Once I had that, it wasn't difficult to export the model to the 'obj' format, import it into Vue Infinite and make a 'turn table animation'. That is what you see above. Not too bad, is it?

With the 'obj' model at hand, I decided to have a better look at a website I had visited before. The site, by the firm 'Shapeways', provides a service through which you upload a 3D computer model, and they then check it, print it in 3D and ship it to you. The instructions on how to check the model and upload it were fairly straightforward, so all was left was to choose a material. You can choose various materials with different qualities, such as the ability to hold detail. I chose a material that promised to allow details and settled for a small size, as you pay for the volume of the material used. 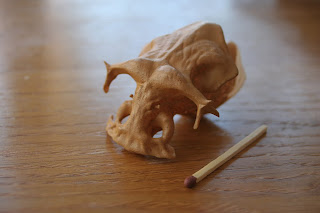 Click to enlarge; copyright Gert van Dijk
The model arrived within in two weeks and looked good. Part of the left maxilla had broken off, not too surprising if you consider how thin it was. The website has lots of information on how to prevent making your models too thin. What I had not foreseen is that the material was transparent, so much of the detail did not show up. I painted it to solve that, and photographed the result. Interesting, isn't it? I was impressed with the details, but would like a larger size next time. You pay for the volume of material that goes into the model, so I will have to learn how to hollow out the model; if I manage that, I should be able to order a much bigger one for the same price.

So, it's off towards the sunset for me, for a while. I intend to keep on replying to questions here and on the Furaha bulletin board in the meantime, so I'm not away altogether.
Posted by Sigmund Nastrazzurro at 13:56 14 comments: