Ballonts VI; back from the brink, or still lead balloons?

Over the years, many readers expressed how sorry they were to learn that ballonts, i.e. lighter-than air lifeforms, were almost impossible to achieve on an Earth-like planet. The only way you can have a ballont on such a world is to shape it similarly to actual balloons on Earth: they have to be very, very large. What I had badly wanted was ballonts as aerial plankton floating through forests, or small ballont 'seedlings' released by their parent organisms, or something tiptoeing over the plains, as in the previous post. Such ballonts were an integral part of the Furahan menagerie, until I sat down to do the math. The sobering results are to be found here, here and here. 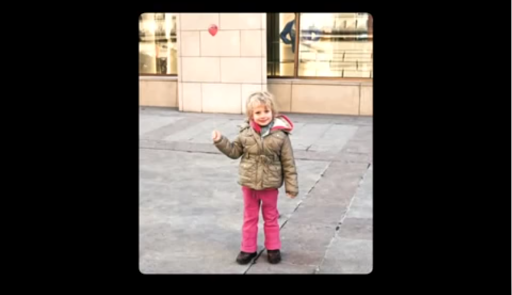 With that knowledge in mind, I was quite surprised to see a video showing a very small balloon on YouTube. I copied two stills from it to show you, but advise you to see it on youTube.

The video shows a very small balloon, of a size that would lend itself very well to a ballont! Was I wrong to think that small ballonts, or small balloons for that matter, are impossible? The video's narrator says that the balloon weighs 0.3 grams and needs only "naught point five eight litres of helium to float". The video shows a hand releasing a string, or so we assume, as I do not see the string in question, and the image of the balloon then rises. That sounds like a strong assertion that the balloon actually goes up into the air when released. But the video was made for advertising purposes, and advertising and truth are not the best of friends. Beware: the part where the balloon rises after being released looks like an animation rather than live action, and in the rest of the clip there is no actual video of the balloon floating.

Luckily, they showed numbers: the video specifies a volume of helium, of 0.058 L. Volumes do not depend on weight or mass, so I suppose they meant the volume of the inside of the inflated balloon, as that seems the only thing that would make sense. We can easily find out how large a sphere should be to take up 0.058 L. Turn that into cubic meters, apply the equation for the volume of a sphere (4/3 x pi x R^3 with R as the radius of the balloon), and you get a radius of 0.024 m, or a diameter of 4.8 cm for the balloon. That looks like the size they showed in the clip. Very well, but how much mass can that volume of helium actually lift?

Well, under 'standard' circumstances, meaning 20 degrees centigrade and one atmosphere, the density of helium is 0.179 kg per cubic meter, and of air 1.2019. From that it is easy to calculate the mass of 0.058 L of helium and of 0.058 L of air. Subtract the two, and that is the mass you can lift. You get 0.059 gram. That is almost nothing! Mind you, for a balloon to work it must first lift the mass of its own envelope. In this case, the envelope has to have a mass LESS than 0.059 gram, or else it cannot float. Good luck with that. I am beginning to think that the balloons in the clip were not kept aloft by a bit of string, but that they were held up by a length of stiff wire.


Still, I wondered if there was anything to be done about the physics. In my previous models, I had used the characteristics of PET for the membrane of the balloon, because that is a strong material that will not let even gases escape. Unfortunately, PET has a density of some 900 kg per cubic meter, so it is only a bit less dense than water.

Here is my old model again. The x-axis shows the radius of spherical balloon in cm and the y-axis shows mass in grams. A balloons works if there is a mass difference between the displaced air and the gas inside the balloon. If that difference is larger than the mass of the membrane, you get lift. In the graph, the red line shows lift: if the values are negative, the balloon sinks, and if they are positive, it floats. This PET-balloon will not float if the radius is smaller than 25 cm; that is a big balloon. Actually, that is MUCH bigger than the balloons you can buy for parties. The membrane of latex balloons must weigh a lot less than the one in my model.


Here is the same model, but now the membrane is magically completely massless. That helps a lot! Mind you, that third power is still being difficult: a balloon with a radius of 10 cm can still only lift 5 g. To lift just one gram, you need a radius of 6 cm. Even without such a weightless membrane you cannot have truly small balloons. This raises the question what the mass of a typical children's balloon is, and how small manufacturers can make them?

I asked balloon manufacturers, and they were friendly enough to reply. It turns out that helium balloons of 9 inches can float, and that 5 inch balloons are the smallest ones to float. But they do so weakly and only for a short while, because the helium leaks out though the latex. Now, I refuse to use illogical mediaeval units of measurement, so I will substitute 12.5 cm for the width of five working men's thumbs held next to another. That is a radius of 6.25 cm.  The manufacturer told me that the weight of such a balloon is roughly 0.7 g, if made out of white latex. The colour affects the weight.

Well, that makes sense if you compare it to the magical massless membrane: the magical one could lift one gram with a 6 cm radius, and now we find that the actual weight of the membrane of a balloon of that size is 0.7 g. That leaves 0.3 g for lift. That is just enough.

Today's lesson is that physics still conspires against ballonts. A secondary lesson may be that advertisers can waste your time. I knew that already. Sigh.

PS this is an additional figure I had prepared but not posted. However, it ties in so well with Abby's comment below that I decided to add it.

Posted by Sigmund Nastrazzurro at 12:11 28 comments:

Email ThisBlogThis!Share to TwitterShare to FacebookShare to Pinterest
Labels: ballonts

It is with some trepidation that I show you this particular dead painting. (If you wish to see more, just use the search function to find 'Archives'.) It is one of the oldest in the series of paintings that later became the Furaha universe. The subject is neither thought out well nor painted well. The sky used to be ochre, but I secondarily, after a year or so, decided to paint it over with bluish tints to improve the demarcation of foreground and background. That helped a bit, but not enough. I admit that I have now decreased the contrast of the background digitally to improve the sense of depth in the painting.

At the time of painting I was still enamoured of ballonts (there are many posts on this blog about 'ballonts'). I was exploring what you could do with them. So here is a ballont species with the ability to hover a bit above the ground, tiptoeing from stem to stem if it chose to do so. If endangered, it was supposed to be able to release its hold and shoot upwards like a cork in water. I did not stop to think how such animals would be able to regulate the upwards force of their balloon. Perhaps it could contract its bladder forcefully, decreasing its volume and compressing the gas inside.

Anyway, I remember that the tree (?) in the background started out as a gigantic slug-like creature moving across the landscape with interesting mushroom-shaped organisms on top. When the painting was redone, I transformed it into a sessile lifeform, but the mushrooms stayed. These can obviously tilt or bend in such a way that they deflect the wind. Although I have no idea what these mushroom organs are actually for, I still like the idea of them forming a buffer against the wind.

You will not be surprised to learn that the tomatl did not make it into the modern, more sensible, Furaha universe. Now they do, and the quality of the paintings have improved too, or so I like to think. It was fun to simply paint whichever shapes suggested themselves, without wondering whether they made any sense or not. Progress...

Posted by Sigmund Nastrazzurro at 12:40 7 comments: