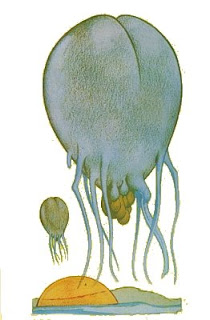 More Edd Cartier! Once again, you can see that there were some really good aliens 50 years ago.

This time, it's a ballont. A what? You heard, a ballont. Or perhaps the word is new to you, as well it might be, seeing I invented it. It is meant to describe all lifeforms that fly, or float as the case may be, due to being lighter than air. All heavier-than-air flyers are labeled 'avians', even if they do not look particularly like Terran birds. Terran insects are avians too in exobiological jargon, like it or not.

Do ballonts make any physical sense? At first glance, they might not, seeing how on Earth man made balloons have to be enormous to lift just one human up into the air. Could such a design be made out of living tissue? In that case the lifting gas inside, no matter whether it is a light gas or hot air, would have to be supplied by the animal. That is no mean feat, and would probably require a significant energy expenditure, requiring heavy organs, making it impossible to lift them, etc. Even if the sac itself were made of dead tissue, not requiring any energy, and if the lift would be generated passively, for instance by being kept hot in some way by the sun (by being pitch black perhaps?) there still is the problem that there is virtually no way to move against the wind.

No, the thing is to adapt the circumstances rather then the organism. Would you consider a fish as a ballont? Probably not, but you would be wrong conceptually (you would be literally right, as fishes do not fly in air). If the fish has a swim bladder, it manages to float passively in the sea; it does so because it, as a whole, is just as heavy as water. And yet the fish itself, with its bones and its muscles, is made of material heavier than water. It is the swim bladder that is much much lighter than water, being filled with air. The combination allows the lifting forces supplied by the swim bladder to balance the sinking forces due to its heavy body: the fish floats...

The reason why fishes work and ballonts do not (really) resides in differences in mass: the fish isn't much heavier than water, but its bladder is much lighter than water. That's why a small bladder can lift a big fish in water. For a human in a balloon, the human is much heavier than the air, while the contents of the 'bladder', the balloon, are only a bit lighter than the air. Hence, an anormous balloon is needed.

The lesson is that ballonts will work better in heavy gases. That's why SF authors have them floating in gas giants. In the Furaha universe, ballonts in gas giants are so ubiquitous that people are completely bored by them. "Oh no, not another documentary on ballonts..."

Having ballonts on a terrestrial planet, a Gaean such as Furaha, that is a novelty. On the website there is I think as yet only one, on the splash screen. I am afraid to do the math, as I am afraid I will have to strike them from creation, and I rather like them.

Look at Cartier's ballont. You can see he understood the metabolic difficulties of the design: the limbs are frail and light, and most of the animal is in fact no more than a sac. You could probably work out the heaviness of its atmosphere by comparing the volume of the sac with the mass of the rest of the body. Fairly heavy, I would say; definitely not living on a Gaean.
Posted by Sigmund Nastrazzurro at 22:36 1 comment: