I received, courtesy of Dougal Dixon, an invitation from Oscar Salguero, a book curator from New York, to view a Zoom presentation given tomorrow by Dougal. Mr Salguero assured me anyone can register for free. Because time is short I will just pass on the information.

"Mr. Dixon will give a live presentation highlighting some of his most important works on speculative zoology from the last 40 years. This will be presented via zoom and it's sponsored by the Center for Book Arts in NY."

Here is the event (click on "Register" button to receive the zoom link):

This is just a short update for those who are curious about Dougal’s work.

In the talk, Dougal mentioned that there would be a 40-year anniversary edition of ‘After Man’, that should be published before the end of 2021. I understood that it will have more material than the books published so far, including sketches.

Another interesting bit of information was that there were Japanese model kits of some of the creatures featuring in ‘After Man’. Dougal showed a box with content of an unassembled kit of the Night Stalker. I was curious and wondered if I could find out more about those kits (secretly hoping I might still order one from some forgotten Japanese warehouse). 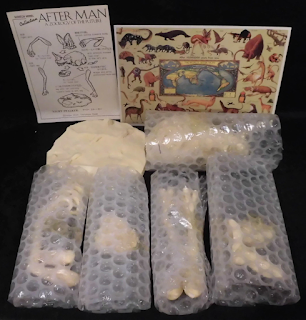 Well, I found two entries on a site of a company where you can indeed order such things, but the items were sold out. There were a few images, and I chose the one above, because it showed the contents of the box. 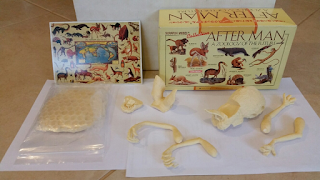 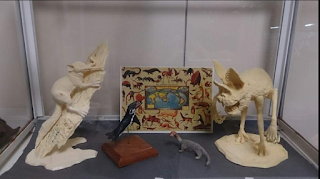 The two images above are were posted by a collector on a site called ‘dinotoyblog’. Interesting, aren't they? Alas, I found no hidden stores of such models...

Posted by Sigmund Nastrazzurro at 13:03 16 comments:

A friend called my attention to an art project she had read about in her newspaper, and she thought I would like it. I certainly did and decided to write about it, even though it is not a typical speculative biology project. The project is much more about the art than about science, and has a strong poetic quality. But foremost, I think, it is work of extraordinary quality.

The project is called 'Terra Ultima'. There is a nice site showing quite a few paintings, as well as a Youtube channel, with some videos showing the artist at work. The background story is that the artist, Raoul Deleo, has visited the continent of Terra Ultima several times and came back with the sketches of its wildlife to prove it.

Here is a nice video showing the background story. Raoul lives only about 35 km from where I live, has been working on his project since at least 2015, but I managed to remain completely ignorant of his work until recently. I was just in time though, as a book about the project has just been published. In case you are interested you should know that at present it is in Dutch only, but Raoul told me that a French version is already in the works, and English-language publishers have already showed an interest. Let me just jump in and give you some examples.

The 'Pallid Octopossum' (Octopossum leucostolum). I chose to start with this one, because terrestrial cephalopods are a Big Thing in speculative evolution. A long time ago, I argued that the tentacles of walking octopuses (yes, I know about the plural 'octopodes', but this sounds better) would turn into legs with joints (here is the first post of a sequence; to find the rest, just type in 'walking with tentacles' in the blog's search window). The arms need not evolve a skeleton if they mostly have to deal with tensile rather than compressive forces, so a brachiating animal might still have tentacles (or a cernuating one). This cute fellow's furry tentacles would fit the bill.

Before anyone starts complaining that this animal cannot possibly have evolved either from a cephalopod or a mammal, I agree. The combination of fur, external ears, a long probably sticky tongue on the one hand and tentacles with suckers on the other tells us that this animal is a composite.

Regular readers may remember that I had my doubts about the 'mix a monster' approach used in the film and game industries (examples here and here). At the time, I concluded that that was one of the defining differences between the worlds of 'speculative biology' and 'creature design': the first frowns upon approaches that are contrary to science, whereas the second couldn't care less, as long as the results looks cool and sells. I try to limit my protesting against a lack of scientific rigour only when people make unjustified claims about scientific quality (I am a scientist; that is what we do!).

A gecko! Sort of anyway (Erminogecko mollidactylus). It is a hexapod! There's fur, external ears again, three pairs of legs with four toes each, so this animal is also a composite. Have a close look at its potential prey. In an interesting twist, this creature has one pair of membranous insect-like wings, as well as two bird-like legs, and camera eyes, not compound ones. It is almost the reverse of the geckoid, so the illustrator is letting the viewer see that he knows what he is doing, and that the mixture is part of the fun.

There is probably a third school of 'design an animal', and this particular one is probably much older than creature design or speculative evolution: it is 'animal fantasy'. I guess its ancestry includes the fantastical animals bored mediaeval monks drew in the margins of their books, as well as the beings Hieronymus Bosch painted to make people scared of Hell.
A 'lieveheersbeertje' (Coccinellursus hexapedus). A 'lieve-heers-beest-je' is literally a 'Good-Lord's- beast-diminutive suffix'. That's Dutch for ladybug. A 'beer' is a bear, so the name is a nice pun combining 'ladybug' with 'bear'. I wonder what the translators will do with that; do any readers wish to take up the challenge?

The animal is again a composite hexapod. Fantasy animals mostly have to look good, and does this one look good! I really must work on my own fur painting skills. Have you noticed that the animals are all posed in such a way that their anatomy is well visible, without awkward foreshortening and with good lighting, so there are no shadows obscuring part of their shape or colour? That style reminded me of James Audubon.
Here I put together Raoul's 'Flamingo fawn' (Phoenicopterus cervocephalus, which conforms to 'deer-headed flamingo') next to Audubon's flamingo. Look at how the head is turned around, so the shape of the animal just fills the available space. Raoul confirmed that Audubon was a great inspiration, so that explains part of the atmosphere of these paintings.

The 'sheen green harefly' (Libellula lagoformosa). An insect-mammal composite showing a wonderful mixture of forms and colours. I cannot help wondering how it would fly, with those four wings at its very top. I guess it might look a bit like a tetrapter in flight, although the harefly obviously has bilateral symmetry.

The 'headwinged penguin' (Pygoscelis cephalopterix). Humour is one of the best ways to avoid people taking your work overly seriously, and Raoul's work is suffused with a mild humour. Penguins look charming to begin with, and equipping penguin heads with functional (!) wings puts the work into the proper perspective, I think.

Terra Ultima is a charming and very entertaining animal fantasy. Even if you prefer a diet of rigorous scientific speculative evolution, the Terra Ultima site is definitely worth a visit, if only to be inspired by the extremely skilful paintings.

I have already ordered the book, and will keep you informed on this blog when there are versions on other languages.