The Cycle of Cyann

The title should more properly be 'Le Cycle de Cyann', as this is a series of 'bandes dessinées' (the word 'comics' does not seem appropriate) by Bourgeon and Lacroix that does not seem to have been published in English. I have no idea why, but there have been arguments with the first publisher, Casterman. The series started in 1993 in a magazine called 'A Suivre' ('To be continued'). Strangely, I did not find any good websites to direct you to, not even at the two different publishers responsible for the albums: Casterman and Glénat. Amazon in the UK and the USA only have entries for French and German versions, but amazon.fr will at least show you all the album covers. The series revolves around a rather attractive headstrong young woman called Cyann. Driven by the hope to find a cure for a disease ravaging her home planet she discovers that the priest class on the planet have kept a portal system hidden from the population, that allows travel through space. The system is largely derelict, and many worlds have been out of touch for so long that they have forgotten their common ancestry, and developed their own customs, architecture, etc. The reason to mention the series here is that the authors are rather good at making up entire planets, with ecologies, etc, along with peculiarities of their human inhabitants that really seem to belong in that ecology. Cyann's home environment is humid and tropical, and the inhabitants are accordingly dressed scantily. Except that this makes sense, it allows Bourgeon to draw attractive women, something he seems unable or unwilling to forgo anyway. There are lots of plants and animals in the series, and you can tell that much attention has gone into their design. Anyone interested in the background of the series should pick up a copy of 'La Clé des Confins', that is not a story by itself, but a companion volume explaining the worlds Cyann travels on. Here I will introduce just a little sideshow from the first album (La Source et la Sonde). The two main protagonists have camped outside and are waking up. The next page starts as follows: 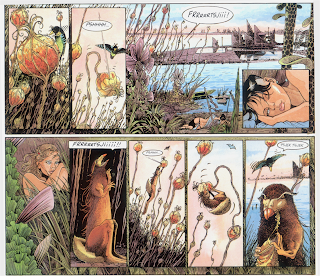 Click the image to enlarge it
We are treated to part of a food web in just a few frames: there are floating seed heads, that are of coarse ballonts (see earlier entries in this blog to learn more about ballooning animals). The balloon sac is opened by some avian to get at the seeds, while a ground-living animal has another way of getting at them: it jumps up to get at them, and its hind legs seem specifically well-developed for this purpose. But make sure you look at the background as well: there are interesting plants, there is a city with intriguing architecture, the heroine is lying on the ground, etc. And all this is just a sideshow for the main action. I think I will post some more morsels of this marvelous universe every now and then.
Posted by Sigmund Nastrazzurro at 13:40 No comments:

So the 'Walking Tentacle, Mark II' developed last time has a stack of elements able to withstand compression and still has considerable amount of freedom, with its many ball-and socket joints. In fact, I was tempted to elevate it to the level of a 'Working Solution' and to keep it in the Furaha universe. There are several things it cannot do that a completely muscular tentacle can do, and that is to lengthen or to shorten at will. It also still takes lots of muscle force just to keep it in place.

There are some interesting refinements to be considered. One thing I came up with is that the surface of the joints is now completely smooth, not obstructing movement in any way. But suppose that the surface could somehow be made to become less smooth if needed. Perhaps with small elements under the surface that can be raised to make the surface coarse-grained. If you do that on both sides of a joint's surface, the friction will become much larger, so the joint would need less muscle force to stay in place. That would be the Mark IIb...

But a much more likely development would be to reduce the number of movable elements. Simply lengthening the compressive elements inside the tentacle would solve many problems: there are fewer areas of motion, hence fewer places where muscle force is needed. The concentric muscle cylinders can go, as they are replaced by muscles spanning one or two joints. 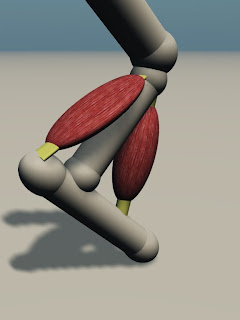