Legs to stand on

When I sketch a large alien animal, its legs tend to take on the shape of Earth legs with a life of their own. Depending on their general way of life, the animals' legs look like those of mammals, reptiles or amphibians. When the animals are insect-sized, the legs that take shape on the paper are thin and stick out sideways. Apparently the parts of my brain that are responsible for these patterns are so indoctrinated by life on Earth that it takes an effort not to produce them. I am not alone in this, as a glance at websites such as Speculative Evolution will reveal. 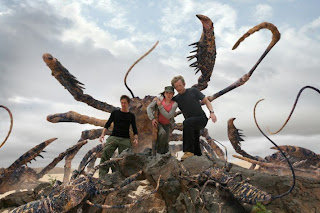 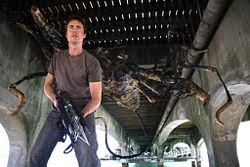 Click to enlarge; from 'Primeval'
The wish to 'alienate' the animals can easily result in trickery, such as inflating the arthropod design to the size of a large mammal, or to give the animal tentacles to walk on. The two images above are from the series 'Primeval', a British television series (I like it, by the way!). The heroes encounter some Silurian animals. As you probably know, there were some impressive arthropods around at the time, but they weren't impressive enough for the makers of this series. A pity, as there are enough ways to tell a good story without being silly. There are various reasons such animals could not be that big, and they could no more cling to the ceiling than you can. Effects of scaling are largely to blame, discussed earlier here and here.

But even if you do take physical constraints into consideration, there are thousands of intriguing questions to ask. For instance, if sprawling legs are a bad idea for large animals, why do small animals have them? Why do mammal legs folded in a zigzag manner, with successive bones pointing in opposite directions? Why shoulder blades? What is the optimal number of leg segments? This post presents some -rambling- thoughts on such questions. 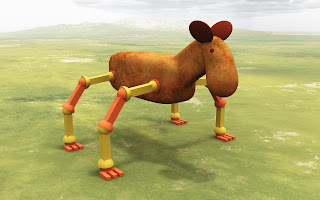 Click to enlarge; copyright Gert van Dijk
Let's start with an animal with insect-like sprawling legs. It's not insect-sized though, but mammal-sized. There are four legs, but that is not the point. There are three segments to each leg, but that is not the point either. The joints are all ball and socket joints providing movement around three axes each; that is a bit much, but I will get back to that.

It does not look comfortable, does it? Neither would you if you had to walk around in a similar position: like doing push-ups all day. The poor beast (Disneius salamandris) will have to spend a lot of energy to keep its body from sagging to the ground. In other words, it takes energy to keep the joints in their current positions. To understand how you can minimise that force requires a bit of knowledge about levers, vectors and torques. 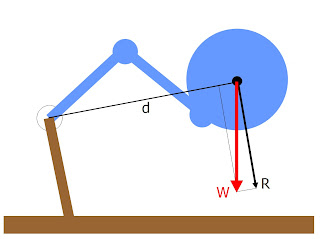 Click to enlarge; copyright Gert van Dijk
Here is a drawing of the body with just one leg. Let's pretend the body and parts of the leg are stuck together, so there is just one joint to consider (where blue and brown meet). Gravity pulls at the mass of the animal at its centre of gravity, with a force marked 'W' (for weight). How much 'turning power' does that result in at the joint? Easy: connect the joint and the centre of gravity with a line of distance d. Now, using vectors, draw the component of W that is at a right angle to line d; that force is what turns the joint (marked with a black arrow 'R'). The longer the arrow for R , the higher the force. How much turning power this exerts at the joint is obtained by multiplying d with F: the turning 'moment' or 'torque'. 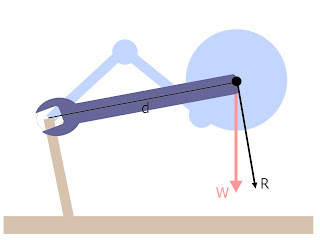 Click to enlarge; copyright Gert van Dijk
To make that a bit more intuitive I overlaid a wrench on the graph. The wrench grips the joint, and the part where you would put your hand is at the centre of gravity. To use the wrench you would pull or push on it at a right angle to it, right? That would be the force 'R'. The harder you pull, the larger the torque will be. If you were to use a longer wrench with the same force, you would also get more torque. More force and longer handles; that is about all there is to it. Back to D. salamandris; it will have to exert an equally large torque of its own using muscle forces -not drawn- to stop the joint from moving. 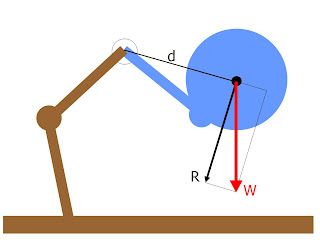 Click to enlarge; copyright Gert van Dijk
Here is the same reasoning worked out for another joint. In all cases the torque, the product of multiplying d with R, calls for lots of muscle power. Avoiding all this energy expenditure calls for minimising the torque. You can make d smaller by getting the joints as close to the centre of gravity as you can. Minimising R also works, and to do that you should make the line d as vertically as possible: get the joints underneath the body. I think that this principle also explains why legs tend to bend in zigzag fashion: it keeps the joints more or less close together and minimises gravity-induced torque. So, poor D. salamandris does it all wrong. 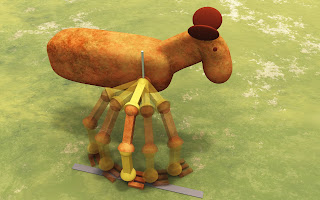 Click to enlarge; copyright Gert van Dijk
But before we let D. Salamandris go extinct, let's have a look at what its sprawling stance means for the anatomy of the joints in its legs. Above you see one leg in a few positions, obtained by rotating it around the axis in the joint connecting it to the body. To get a movement suitable for walking, its foot should move in a straight line from front to aft (in reality the foot would stay put but the body would move forwards; seen from the body it is the foot that moves backwards). Getting the foot on the stripe only requires straitening some of the joints a bit. But ensuring that the foot always points forwards also requires that there is a way to rotate some of the bones around a longitudinal axis. If you start to think about this some more, you will find that having legs stick sideways requires rather complex joints; it may seem easy, but is not. 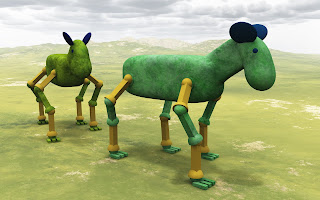 Click to enlarge; copyright Gert van Dijk
Here is an intermediary stage in standing on one's own legs: this animal has brought its feet in underneath its body, and its legs show a zigzag pattern, but mostly sideways (a final stage will appear in a future post). This does not solve all problems, as you may well ask why insect do walk with their legs sprawling to the sides. After all, if bringing the legs in is so advantageous, why do not all animals do so? There may be two answers to that. Sprawling and having bent legs is not advantageous if gravity is a big problem, as such positions require lots of muscle power. As discussed previously in my posts on scaling, such problems increase very quickly as animals get bigger. Make them smaller, and the added energy expenditure hardly counts any more in the overall budget. There is also an advantage for small animals to have sprawling legs: it helps them from being blown over by the wind. 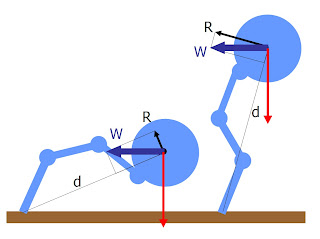 Click to enlarge; copyright Gert van Dijk
Above is a similar drawing as previously, but now with a horizontal force acting on the animals: wind. Wind forces can cause the animal to topple over, and once again the component of wind force that does that is at a right angle to the line connecting the centre of gravity to the point of rotation: where the feet touch the ground. The animal with the lower centre of gravity and the more sprawling legs is better protected against wind forces: the force R is small and directed upwards, meaning the weight of the animal counteracts it. For the upright animal the story is different: R is directed sideways, is not counteracted by gravity, and the animal only needs to tilt a bit before the centre of gravity is no longer above the feet.

Once again, scaling plays a part: when you are very small, wind forces play a relatively larger role than at our human size. The same works when you supplant air with water: walking under water will be very difficult if the water is streaming at some velocity. So, vertical legs become more advantageous when animal mass increases, and the more so on planets with a strong gravity. Horizontal, sprawling legs are better when being blown over is an issue, and that is more likely to happen when animal mass is very low, when the atmosphere is very syrupy or the wind becomes stronger. Which legs are best when you are an animal on a very high gravity world with gale forces howling through its soupy atmosphere? Difficult to say; perhaps it should have vertical weight-bearing legs as well as lateral struts...
Posted by Sigmund Nastrazzurro at 19:12 8 comments:

Whose alien plants are these ? - bis

'Anonymous' gave the right answer yesterday, when I had already written the first draft of this post. The 'paintings' I showed last week were in reality photographs of glass works of art displayed in natural surroundings. The artist who made them is called Dale Chihuly, whose work I found by traversing the internet looking for alien plants. I rather like the plant shapes he produces: they are very organic looking, and displaying them among real plants provides a pleasing contrast. I thought that showing them in their original form might have made the riddle a bit too easy, which is why I turned them into 'paintings'. I did so with Corel Painter, by the way. 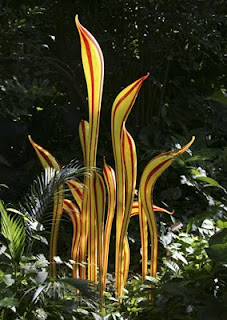 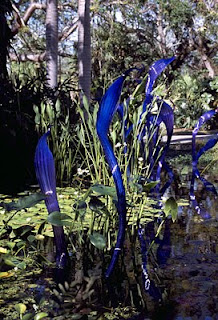 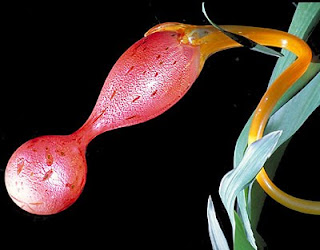 
Above are the three images I had worked over, but now as I found them on Mr Chihuly's website, right here. There are two more I did not work over to give you a further taste of his work. If you wish to see more images of his plant-like creations, you will find many more of them under the column 'temporary' of the 'installations' page; just pick something from the right-hand column and have a look.

After this intermezzo I will be back with a post about legs, discussing things such as why splaying them works for very small animals but not for large ones, and why bones of large animals have a tendency to fold in zigzag fashion.
Posted by Sigmund Nastrazzurro at 18:19 1 comment:

Alien plants III: whose plants are these?

While the busiest part of the year for me usually lasts from the middle of August to the middle of July, the present period presents problematic peaks. In short: not enough time.

Therefore I will just continue the alien plants theme by showing a few images of otherworldly plants. So who made them? Do you know?

I warn you that I cheated: the images have been altered to prevent any immediate recognition. I will post the answer in a next post, along with the unaltered images. 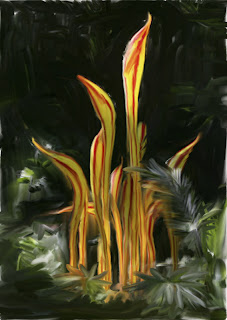 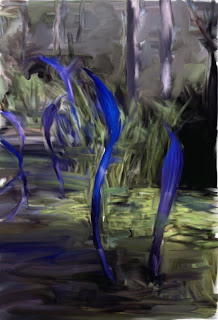 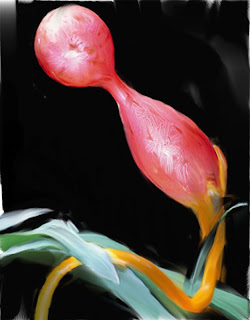 Click to enlarge
Posted by Sigmund Nastrazzurro at 20:39 2 comments: