Birds with clubs and other smashers: clavigerism

I intended to write just one blog entry every two weeks this year, and am already breaking that rule. I could not resist, after reading a paper on an extinct Terran bird. The similarities to some Furahan creatures were simply too interesting to leave it alone, so there you are. 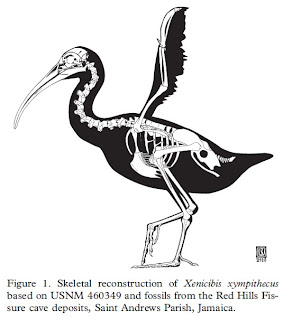 Click to enlarge; Longrich NT, Olson SL; Proc R Soc B 2011, online 5 January 2011
And here you see a reconstruction of the bird (top) and a comparison of its wing bones (bottom) with that of a still living ibis species. The authors make a case that the bird was flightless, and go on to say that the wing bones are odd for flightless birds. That holds for the hand in particular, with its thick and curved bone. The authors think it functioned as a club, and provide various anatomical reasons why they think so. After that, they discuss the club some more:
"We therefore propose that the wing of Xenicibis functioned as a club or flail. Several features of the limb would have facilitated this function. Kinetic energy is the product of mass and velocity squared; accordingly, weapons such as clubs and flails have a long handle to increase the angular velocity of the club, and are heavily weighted to increase the mass accelerated by the swing, and the centre of mass is near the end of the club, where the angular velocity is highest. Precisely this design is seen in the hand of Xenicibis, where the end of the wing is massive, and the proximal metacarpus and long forelimb could act as a handle. "

The authors of the paper also compare this odd ibis design with the front legs of mantis shrimps (Stomatopods), that function in a similar manner. The video above shows a slowed down version of a strike, and incidentally allows the shape of the club to be appreciated as well. It is taken from the lab of Sheila Patek, whose work on the biomechanics of their legs featured in this blog previously. 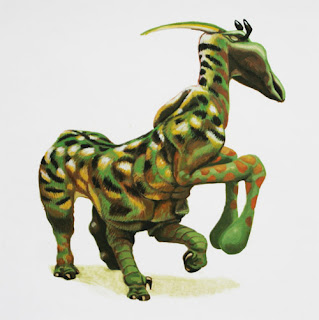 A long time ago mantis shrimps were the inspiration for Furahan neocarrnivores. You will find more material on them on the Furaha site (go to the land page). One of them is shown here (one of its commoner names is 'pugile'). Compare its front legs to those of mantis shrimps and to the ibis; I think that the ibis still had a long way to go before its clubs measured up to those of other club bearers. Then again, they were probably meant to hit other ibises, not kill prey animals, and it might not be advantageous in the long run to kill fellow ibises; merely sending them off might be good enough.

Stomatopods, Xenicibis and Furahan neocarnovores may all be said to have developed their clubs from what originally were locomotor limbs. In the Stomatopod and Neocarnivore cases, the limbs in question were used to walk with, and in the Xenicibis case its ancestors used them to fly with. In all cases their freedom from locomotion opened the door for a new function, and interestingly the new function was a weapon in all three cases. I think that Xenicibis therefore qualifies as much as the other two as an example of 'centaurism' (more on centaurism here and here).

I am delighted that we now have an example of 'raptorial centaurism' concerning a fairly large animal on Earth. Both Stomatopods and Furahan Neocarnivores have evolved various kinds of front legs, functioning as different types of weapons: there are 'smashers' and 'spearers' in both cases (Neocarnivores have webs or basket-like thingies as well). It would be great if more diligent paleontological work would uncover a 'spearer' on Earth as well, but I will not hold my breath. Meanwhile, perhaps it is time to coin a phrase to start differentiating between the various kinds of weapons limbs may turn into. 'Smashers' sounds good, but is limited to English, and that won't do. Luckily we still have Latin. A 'claviger' is an existing word for club carrier, with the plural 'clavigeri'. Turning it into a principle would result in 'clavigerism'. I don't expect a follow-up paper on Xenicibis to use the word; then again, the authors used the interesting phrase 'volant species' for birds that actually fly, so perhaps they can appreciate a bit of biogeekery...
Posted by Sigmund Nastrazzurro at 13:02

It's not well known, but quite a few living birds have claws, clubs, spikes and blades on their wings.

Tetrapod Zoology has a facinating write-up on this:
part 1:
http://scienceblogs.com/tetrapodzoology/2010/06/clubs_spurs_spikes_and_claws.php

If I may, I would suggest the definition of centaurism, only include those structures which are recognizably stemmed from limbs. (otherwise, the mandibles of insects would be centaurism)

J.W.: I had not seen those yet. It turns out that Xenicibis was in fact mentioned in one of the discussions as a 'clubber': http://scienceblogs.com/tetrapodzoology/2010/06/detachable_wing-daggers.php

So it is not that strange for birds to use their wings for purposes other than flying. Still, the loss of flight would make it easier to adapt the wing to its new purpose, and Xenocibis seemed to have been on that way.

Rodlox: I agree: centaurism is about new uses of previously locomotor limbs.

Rodlox says,
I've always heard of Aye-Ayes as fishing. though I can buy that some grubs get impaled on the fingernail.

wait, what about dragonfly larvae? don't they shoot out their jaws at prey?

Stock Trading: Thank you for the compliments (who are you, by the way?)

Luke: I think the aye-aye is a bit like the birds with spurs on their still-flying wings: the limb is adapted to serve a new role, but is also still used for locomotion. A limb that is purely used for its new role would strike me as a better example of centaurism.

Rodlox: these mouths are absolutely fascinating, and the larvae pinch prey with them. But you wrote yourself that they wouldn't be centaurism, or am I confused?

Forgive my ignorance, but how does a bone like that found in the xenicibis come about? Is like horn or shell, with material layering over the bone underneath, or has the bone itself grown large and heavy? It's hard to tell from the picture.

Evan, it is the bone itself that is thickened. By the way, this particular paper is free, so you can have a look yourself: