A while ago I discussed Glapumt'ians, a creature from a French series of bandes dessinées (comics) called 'Valérian et Laureline' by Christin and Mezières. It is time to return to their universe with the goumoun. 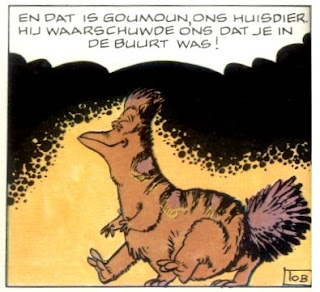 Here he is, in the first frame he appears in. Note that he walks in a trot. Unlike Ralph the Glapumt'ian the goumoun only occurs in one album: 'Bienvenue sur Alflolol'. The story if that Galaxity, i.e., Earth's power centre, has turned the planet Technorog into a technological powerhouse, with extensive mines and factories. And then the original inhabitants come back in family groups. They turn out to live for some 16,000 years and left the planet for an outing some 4000 years ago. Now they wish to pick up life where they left it, on their home planet of Alflolol. The dumbfounded Earth people do not really know what to do. A such, the tale is fairly typical of the time it appeared: 1972, with echos of the 'military-industrial complex', the establishment', etc. Laureline immediately bonds with them, while Valérian hesitates between following her and more or less doing his job. The Alflololians like a good party, and manage to wreck the neatly managed planet by camping in the wrong places, going out hunting leaving a wake of wrecked installations, etc. The following illustration shows the cover of the 1974 Dutch version (In Dutch Valérian is called Ravian, probably because of associations with the tranquilizing herb 'valeriaan'). The 'fish' they are hunting (a furutz) doesn't like hydrodynamically sound, with all those protuberances, but this series isn't about biomechaniscal rectitude. He looks exciting! 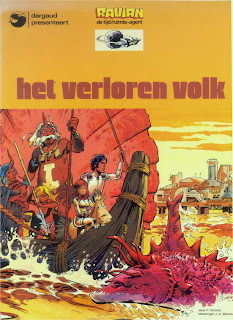 Click to enlarge
The goumoun is the pet of one family of Alflololians; he is definitely relatively intelligent and from day one the goumoun and Laureline become the best of friends. As I noted before, this series makes no attempt to make alien species truly alien. The facial expressions on the goumoun's face are as easy for us to read as those of other people, or, come to that, of Glapum'tians! In the course of the story Laureline is carried away by a monster looking like a giant octopus brachiating through the jungle. Valérian is afraid of hitting Laureline by mistake with his impressive-looking space gun, but luckily the goumoun comes to the rescue. 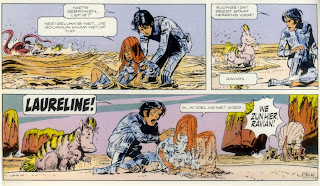 Click to enlarge
The thing I like about the goumoun is that he has four walking legs and two other legs that function a bit like arms. There doesn't seem to be a thumb, and we never see him actually pick up objects with them, which is a bit odd; why have arms if you do not use them as such. Then again, kangaroos don't do that much with their front legs, do they? Of course, many predators on Furaha have a similar arrangement of limbs, with four locomotory limbs and two front legs adapted for hunting. In their case, evolution started with a six-legged design. In time, the first pair of limbs lost its locomotor role and became free for other purposes. There is a page on such animals on the Furaha site (go to the land page), but here is one of the animals on it anyway:

While thinking about the concept of freeing a frontal pair of legs from locomotion, it struck me that I was unaware of a name for this evolutionary trick. This event has occurred on Earth quite a few times on Earth, but does not seem to have a name. If there is indeed no name for it (and please tell me if I am wrong!) one must be invented: let's call it 'centaurism'. The goumoun is an example of centaurism, and so are the neocarnivores with their raptorial specialisations. I think centaurism is a worthy subject for a future essay, so I will get back to it. Later. Meanwhile, if you want to read the album, you may not be in luck if you are restricted to English, as there does not seem to be a translated version. But in France the series is an established success, and you can even buy a statuette of the goumoun: 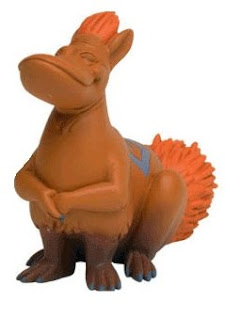 Posted by Sigmund Nastrazzurro at 16:39

So, by definition would humans(and other primates) be examples of centaurism?

That's quick thinking! I wished to work that realisation into the next installment, but you are right: humans are indeed an example of centaurism.

If that is the case, then I think it would just be refered to as 'bipedalism'. But I guess centaurism could be retained for hexapedal species...

Well, I would say that centaurism is the principle and bipedalism denotes counting the legs an animal walks on, in this case two. For instance, crabs are called decapods, but their front pair has been turned into claws, so they exhibit centaurism. They walk on the remaining eight, and are therefore octapods.