Actually, 'Strandbeesten and stomatopods' might have sounded better, but would be even more incomprehensible, and a blog is supposed to attract readers, not frighten them away. Based on how many readers were attracted by previous posts, I should probably use 'The Future is Wild' and particularly 'Avatar' a lot more often in post titles (and no, Furaha was NOT modelled on Avatar; it is much older). Right; now that I've got that out of the way, back to the strandbeesten.
I discussed Theo Jansen's imaginative mechanical walking machines before on this blog. Literally the word is Dutch for 'beach beasts'. If you do not know about them, read that entry and visit Mr Jansen's site, or just enter 'Theo Jansen' into Google or YouTube. His work came up in this blog because of my interest in animal locomotion. The problem he faced was how you can get a foot to move backwards along a straight line when on the ground, after which it has to be lifted, moved forward and put down again for the next step. For real animals this is not a big problem, as the various segments of a limb are all controlled by a nervous system telling each segment when to do what. As Jansen's devices lack a brain, he needed a purely mechanical system to achieve this sort of motion. In the end he came up with an intricate series of interconnected bars: if you start with a rotary motion of one bar, another bar, ending in a foot, produces a suitable movement. Very clever indeed. Such series of connected bars are called linkages. You can take a good look at his design on this particular site, which shows other linkages as well. When I wrote that post I had never seen a single strandbeest yet, and that has now been rectified. Mr Jansen works not that far from where I live, so it was a matter of time before I could visit one of his demonstrations nearby. This was the case last June, on a very cold and windy day. I will show a few videos I made that day.

This is a tiny strandbeest, of which there were three. If its sail is perpendicular to the wind direction, the little beast may walk with the wind. I tried pushing it forward as well, and found that it is not in fact that easy to move. While the 'beesten' are quite light, their joints were harder to move than I had expected. There is no lubrication, but the main problem seems to be that the entire shape deforms enough to put shearing forces on the joints. One result of this is that the poor beest tends to topple over. But never mind that, they are an amazing sight.

Here is a larger one following one of Mr Jansen's assistants.

And this is the major species present at the occasion. Not only did it have two bodies or trunks, an enormous number of legs, but also two waving membranes at the top that I think were designed to help propel it. These sails were reefed that day however, and the force of the wind on the body was enough to prod the beast onwards. Aren't they wonderful?

In my previous post I wondered how often linkages occurred in biology, but did not look up the matter. I have done a bit of research now, and found that there are quite a few examples. Fish jaws are probably the best-known example (see below). Other structures, such as sheep hocks and human knees are also counted as so-called four-bar linkages. In a four-bar linkage four stiff bars are linked together in a sort of circle by pivots. If you hold one bar still, and move another one, the remaining two must move in a fixed way. What that way is depends on how exactly they are connected. I felt that regarding the human knee as a four-bar linkage is bending the rules a bit, as two of the bars are ligaments rather than stiff bars. If you include connected series of bones as well as ligaments there are lots of linkages in biology; what I was looking for was linkages of bones involved in locomotion, but I have not yet seen any. Presumably a system with more mechanical freedom but with a smart nervous system to control it is simply superior. Still, the other ones are interesting. 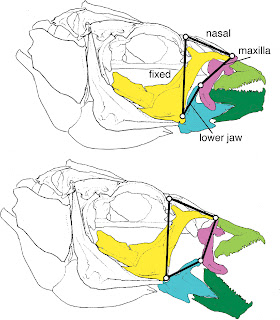 Here is an example of what fishes do with a four-bar linkage. The source is mentioned in the caption, and the colours are my addition. Fish use this kind of mechanism to move their jaws forward and to enlarge the volume in their mouths, sucking in water as well as their prey. There is at least one Furahan animal with a similar arrangement, and those are 'Fishes' too. The jaws of the sawjaw are connected, all four of them, by bars linking them to the neurocranium in a kind of circular linkage.

So where are the mantis shrimps, everyone's favourite Terran alien? When searching for linkage mechanisms I found that there is a four-bar mechanism in their 'raptorial appendages' as well! I like that: somehow you expect animals that not just spear or club their prey but can see depth with just one eye to be special in other respects as well, and mantis shrimps never seem to let us down when it comes to, well, weirdness. 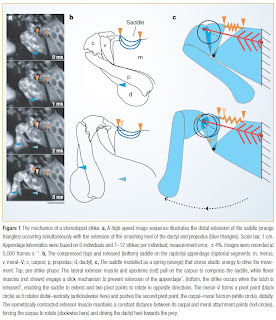 Click to enlarge; Patek et al; Nature 2004; 428: 819
Here is a figure from the journal Nature, no less. The first author, Sheila Patek, has a lab where she studies all kinds of biomechanically interesting things, most notably mantis shrimps. Have a look, as there are quite a few videos and photographs. Under 'multimedia' you will find an inspired lecture she gave on 'TED', where she explains the striking mechanism of stomatopod raptorial appendages. Very interesting. She is not the only one interested in stomatopods either; here is another enthusiast.

So now you know why strandbeesten and stomatopods end up in the same post: they are connected by linkage (I could not resist that one). I guess both also score very highly when it comes to their ability to evoke a sense of wonder.

Strandbeesten are simply amazing.
I'd love to see one in person.

Hi J.W., you're fast as usual; I would almost think you're in a time zone near me.
Jansen does move around, so perhaps one day he will present his beesten fairly close to where you are.

Had I the time and resources (and knowhow) I'd probably try my hand at building one of those. They just look fun!

Evan: I agree. You wouldn't be the only one; just have a look on YouTube. Personally I would be curious to see if it is possible to improve the leg movement further. I think I would not be able to resist adding an ankle joint with a spring, to take care of uneven terrain better.

Also, I've always been fascinated by fish mouths, particularly the John Dory, which has a notably large "stretch" on its mouth. I always wonder how else something like that could be applied in an animal kingdom.

From what I've read, there are examples in the mouths of fish and snakes, and presumably amphibians and birds as well. I have not seen examples in mammal skulls, nor anything in locomotion. Such mechanisms should have advantages as pliers or cutters, or whenever a motion has to be stereotypically the same every time. Wings might do.