Dougal Dixon's new book is out. I suppose he does not need much of an introduction, as he is one of the first people to write a book on speculative biology in a pseudo-documentary style: that was 'After Man, a Zoology of the Future,' published in 1981. Mind you, he was not the first to do so. One book of possibly equal fame is the 'Rhinogradentia' ('last post' here).
I have never written much about Dougal's works on 'SB' - I guess it is about time to introduce an abbreviation for 'Speculative Biology', and 'Spebio' has a silly ring to it; 'SB' will do for now. The reason for not writing about his SB books is simply that I assumed that everyone knew them already. While he is a very prolific writer, he has not published many SB books on his own lately, which means I am excluding the various books on the 'Future is Wild', as these are more or less multi-author volumes. The present post is an exception, and the occasion is a brand new SB book, wholly written by Mr. Dixon. As I wrote earlier, the book has sofar only been published in Japan, in two volumes. I could not resist ordering it, and the two volumes have dramatically increased the total number of books in Japanese I own to three. It is just as well that I chose them for image content, as I do not speak or read Japanese.
I am not going to show you a large number of images from the book, and neither can I show you the sketches Dougal made years ago of some of the animals in his Greenworld universe. Apparently it may be bad for business to do so, so I will not. Instead, there will just be one or two images here that cannot yet be found on the internet. Some others have been shown before but t a lesser resolution. There was more to be found than you might have thought: I showed some in the previous post on Greenworld, and Puyamaster (who commented earlier) found more. Here is a short list for those who wish to have a look: the Japanese publisher's site on Greenworld, a fairly recent interview, and two illustrators' sites (one and two).
The two volumes are not very large, so many illustrations are printed on a somewhat small scale. The theme of the book is human colonization of an alien world and its impact on the local wildlife and on the entire biosphere. Each short chapter tells a short story of this impact, progressing in time, to judge from the dates given at the beginning of the chapters. Each short chapter is followed by some illustrations of Greenworld wildlife, or of how humans interact with it. The story seems to parallel our own involvement with Earth, meaning it is not a happy story. Personally I agree with this dark vision of human influence on the world: human nature being what it is, the chances of intelligent behaviour emerging on Earth seem slim. Please note that I consider the mere presence of intelligence rather less relevant than its actual application. But let's have a look. 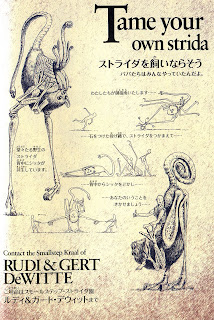 Click to enlarge
The first one is one I scanned from the book. It shows an advertisement, I think, for a Kraal where you can tame your own Strida. The Strida is an animal that normally plays host to another life form, a Sitta. I presume that the Strida and Sitta live in a form of symbiosis, but can only guess what their mutual benefit s are. Anyway, it is clear from the illustrations that humans interrupt this relationship for their own benefit: they snare the Strida, take out the Sitta, and put themselves in the Sitta's position. I was a bit surprised by the Dutch names, but the addition of 'Kraal' suggest that the names should be considered Afrikaans rather than Dutch. I guess Africa evokes more of an amosphere of 'humans in the veldt' than the Netherlands does (and rightly so, even if 'veld' (modern spelling) only means 'field'; no romanticism there) 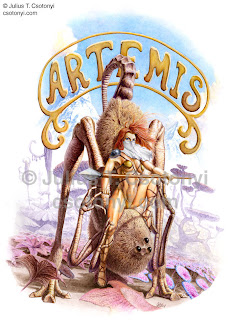 Click to enlarge
Well, that knowledge explain what the woman on the illustration above is doing on that Strida: she is probably using it as Earth humans used horses. The image can be found on the website of the illustrator Julius Csotonyi, and the woman in question seems to be a famous hunter. 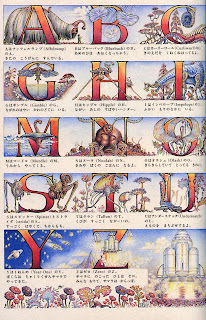 Click to enlarge
This alphabet can also be found on the web, in a smaller but complete form. The large size of the scan brings out more detail than the illustration in the book itself. I suppose this alphabet is meant for children, and as such it is a very nice instance of thinking a subject through: toys and learning material on a colony world would quickly be adapted to local circumstances. What better way of illustrating an alphabet than with animals or events well-known to the children? 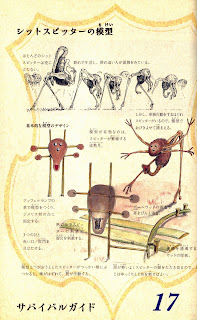 Click to enlarge
I will end with an illustration I like very much, even though I do not understand it fully. Have a good look at it before you read on. At a top someone is riding a Strida in the middle of a group of other animals; is this a herdsman with his herd? Are these animals good for something? Anyway, people on Greenworld see a reason to construct a crude likeness of such an animal in the form of a board. Apparently this fools the animal into approaching this 'mimicry board'. I have no idea whether they do so because of sexual attraction, or anger at a potential competitor, or another motivation altogether. What is clear is that humans have their own sinister motives to set these boards up: a wooden pole is bent in such a way that any disturbance of the board will cause the pole to swing with force in the direction of the animal. That cannot be good for its health, as this is likely to break its legs.
I have no idea what is going on in this scene, but hope that one of the Japanese readers will help the rest of us a bit by explaining what is going on here. On the one hand I really like to know every little detail mentioned on this page, which means we need versions in other languages. (Any publishers reading this: get to it!) But on the other hand the mystery of trying to deduce what is going on here has its own particular charm. Some of you may know the 'Codex Seraphinianus', one of my most cherished books. The Codex shows mysterious animals, objects or events with extensive texts in a completely unreadable script. (Perhaps I will come back to it in this blog later; contrary to what most people think it is not sold out.) Trying to make sense of the Codex is similar to reading Greenworld in Japanese, for me anyway. The one big difference is the Codex will forever remain mysterious, and that one day 'Greenworld' will probably appear in a language I can read. I hope so; I would very much like to see more of it.
Posted by Sigmund Nastrazzurro at 08:53

"Spec Bio" seems to be the term some authors are throwing around.

In the last image, The mimicry boardis a trap to catch a 'lone Spitter'which is trying to mate the board.

This looks so cool! I discovered Dixon through The Future is Wild almost ten years ago and quickly read all his speculative biology books. I wish they would publish Greenworlds in English! I emailed Dixon using the address on his site about whether a translation was in the offing, but never got a response.