Aldebaran, Betelgeuse and Antares are stars, obviously. But those of you who read 'bandes dessinées' (comics in French) may well associate these names with three series of books of the same names. The books are published by Dargaud, and the three series have their own website there. There are five volumes in Aldebaran and Betelgeuse, and the third volume of Antares has just been published, so there are some 600 pages to read so far. For once, speakers of English have not been forgotten; the UK publisher Cinebook is busy translating them into English. The series are all the work of one man, who appears on the cover simply as 'Léo'. His full name is Luiz Eduardo de Oliveira, and he is a Brazilian who works and lives in Paris. There are several interviews available in the form of written texts as well as videos, but all are in French, it seems. At first glance the drawings might seem a bit stiff and the characters a bit wooden, but the whole works quite well, and the series are quite popular. I am one of the readers who was drawn into the story, and am curious how it will one day end. The three series describe human colonization effects on worlds circling the aforementioned stars, but 'space opera' does not do them justice. There are certainly spaceships, and part of the story takes part in space, but the emphasis is on a group of people who travel these worlds and who meet one another in varying combinations. There are several layers to the story: one recurrent theme is the mysterious entity that affects human lives on all three worlds. Another theme, a very strong one, focuses on human matters: there are dictatorial governments who ensure that female prisoners produce babies to make them contribute to society, and there is stifling religious intolerance. But the emphasis lies on the friendship ties within the band friends who work together; not surprisingly, they have rather more enlightened views of how people should behave. This being a French bande dessinée, the author and the protagonists take love and sex in their stride. This must have proved too shocking for the English publisher or audience, as nude female breasts were redrawn, so that version sports rather more underwear than offensive naughty bits. If that interests you, read more here. But this blog is not about cultural attitudes towards human anatomy. There are lots of intriguing animals and plants on all three planets. They tend to be a bit on the rotund side, and generally they do not depart very far from Earth expectations. But they are still very nice to look at. Below there are some examples, scanned from the Dutch version. 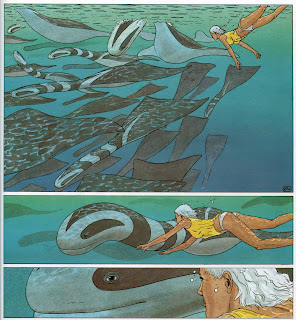 Click to enlarge; copyright Dargaud
Here is part of a page of the Aldebaran series, showing some interesting swimming animals. Someone made a nice 3D animation of them, which can be found on YouTube, but I could not resist showing it here as well. 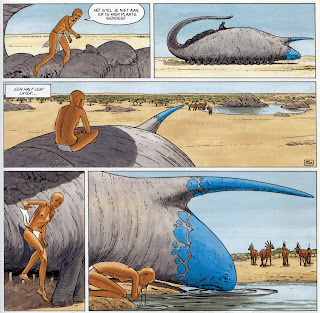 Click to enlarge; copyright Dargaud
This scene shows a young girl making use of a passing large centipede-like animal to hitch a ride. It carries its young on its back, where they are protected against the sun by the animal's tail. You do not see many centipede-like alien animals (of course, rusps abound on Furaha: just go to the land page of http://www.planetfuraha.org). Note that the legs have a slight phase difference, and seem to be on the ground longer than they are in the air, just as you would expect for a very large animal. 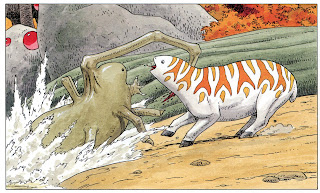 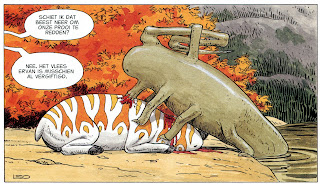 Click to enlarge; copyright Dargaud
The animals usually have quite different body plans, so you can encounter tetrapods as well as hexapods on one planet. In fact, their designs do not seem to point to any systematic differences in body plan between the three planets. While I like the animals, I think they sometimes look a bit too artificial, perhaps? I will try to explain my meaning. Have a look at the two images above. An innocent tetrapod ambles towards a stream and is pierced by an ambush predator. The prong on the back of the predator is folded between two 'posts' when not in use. 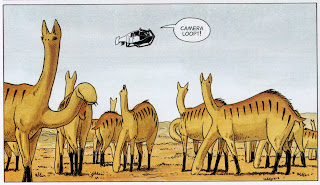 Click to enlarge; copyright Dargaud
These antelope-analogues ('antelogues'?) have one head to look around with and one to eat with. Now that is something you do not see on many worlds; but you do see it a lot on one world, and that is Nemo Ramjet's Snaiad. Convergent speculation, once again? 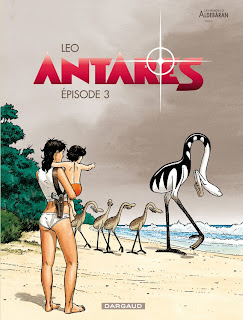 Click to enlarge; copyright Dargaud
Finally, the cover of the newest album. These animals too look odd, but alien animals should look odd, I guess. Whether their arms work well, placed where they are, is anyone's guess. But I still like them and wonder what part they play in the story. I find myself much more forgiving of a lack of plausibility than with Avatar, and do not really know why; perhaps it is because these books seem less presumptuous. It does not really matter; both are enjoyable.
Posted by Sigmund Nastrazzurro at 19:35

"Finally, the cover of the newest album. These animals too look odd, but alien animals should look odd, I guess. Whether their arms work well, placed where they are, is anyone's guess."

Well, it depends what the arms are for. If grabbing food and shoveling it into the mouth, then they are admirably placed to take advantage of the reach the neck provides-- though they probably would work better if anchored closer to the front. Note the arthropods which have a whole range of appendages by their head that run the full spectrum from "mouthpart" to "arm".

Those arms wouldn't be as generally useful as our human arms are for a variety of tasks, heavy lifting for instance, but food-snatching is probably what it needs.


In fact, i think it's so plausible, that my Taxonomy has a group of vertebrates that all have a pair of limbs (usually arms) attached to the back of the skull, which seems convenient for a wide variety of uses. They have generally 4 other conventionally-attached limbs, so i'm not sure if i should consider them hexapods or not.

"But I still like them and wonder what part they play in the story. I find myself much more forgiving of a lack of plausibility than with Avatar, and do not really know why;"

I'd guess because you've seen them flying, breathing, running in top-notch 3D. Viscerally it's hard not to accept their existence on some level. No disrespect to Leo, but Avatar's creatures probably have at least 100 times more effort put into them to make them seem real-- even if there wasn't as much effort in some areas as us spec-bio geeks would have wanted.

They should be there primarily as examples of what it is to be a working artist in the field of animation. In a medium like animation, which is so dependent on technology, the best possible equipment and facilities are, of course extremely helpful. As far as I can see it is a matter of the most extraordinary circumstances and luck, when an individual manages to emerge from the educational system with the autonomy of spirit and knowledge needed for him to be an artist. Too much direction is probably more harmful than too little.

About the arms: indeed. If you see the arms as appendages to deal with food they can be most helpful. I was wondering how they are attached: if attached to the back of a long skull they might be easier to manage than if they have their own shoulder girdle and attachment to the vertebral column (or what goes for a vertebral column).

As how you call animals with limbs that are not locomotor in nature, I am not certain. It depends on the context: in an anatomical and evolutionary context my predators are hexapods, but in a locomotor context they are tetrapods...

About Avatar: I don't think that's it. Léo is telling a story on his own without a biological background and he does not claim that his creatures make biological sense. In the interviews he states that he just takes bits and pieces of existing animals and combines them.
In the case of Avatar, there were such claims, so you expect more.

Chicago Master: clicking on your name led me to an interesting course including cinema, 3D and animation. By 'they', did you mean Léo as well as the people working on Avatar?

"I was wondering how they are attached: if attached to the back of a long skull they might be easier to manage than if they have their own shoulder girdle and attachment to the vertebral column (or what goes for a vertebral column). "

Yeah, if you wanted the full range of motion our shoulders have, the scapula-type-bone could slide around over the back of the skull like our scapulas slide over the back of the ribcage. (The method i've chosen) If the arm's aren't going to be attached to the skull, i'd imagine one of the vertebrae gets expanded to a pelvis-like chunk of bone with ball-and-socket attachments for the arms (like our legs). A shoulder-like attachment to the neck seems problematic unless the whole skeletal structure works in some other way.