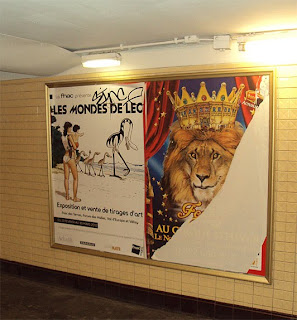 Only a short post this time (well, there is such a thing as real life).

Firstly, I was in Paris last week, and as usual I picked up some bandes dessinées (BDs, comics). There is a collection of specialist shops, but you can also go to large shops selling books, CDs and DVDs, such as the FNAC. A short while ago I discussed Léo's series of extraterrestrial BDs, and had shown the cover of part three of the Antares cycle. The FNAC decided to increase the interest in this series: they are selling limited edition prints and have a small exposition of original sketches or plates that were not actually used. They also draw attention to all this by having posters put up in the passages of the Métro. That goes to show that the French really regard comics as seriously as they would films or other books, doesn't it? It was also nice to see a bit of speculative biology out in the open in one of the world's major cities. 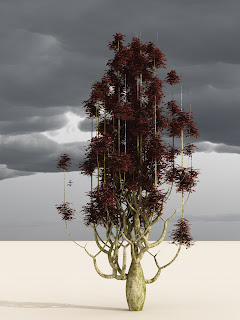 Secondly, I have been working on an updated version of the cathedral forest that is already on the website. The reasons to work on it were that there is a possibility of it appearing in print, and I had spent some time on Epona; Furaha demanded more time!

I design such plants with a program called XFrog, and use Vue Infinite for rendering. Both have their share of problems: XFrog works fine, never crashes, but some parts of it are so complex that it is hard to predict what will happen. Vue Infinite is a program that may evoke more curses than compliments, but recently my opinion of it has improved significantly. The main reason for that probably is that I bought a new computer with much more processing power, and Vue does not seem to feel at ease with mere 'normal' computers. It appears a bit spoilt, in effect. Anyway, I can now produce scenes of higher complexity, and natural scenes quickly require enormous amounts of memory. Shortcuts disappoint quickly: in the past I have had to make leaves much to large in order to get away with a low number of leaves. Similarly, I tricked the eye into thinking that there were many leaves while these only consisted of small triangles without any twigs at all. Such tricks work until you get close, and then the illusion is shattered. Conventional painting is much more forgiving in this respect.

So here is a study of a Cathedral Tree. I think the leaves are small enough to convince the eye into thinking that this is a sizable organism. And now for the rest of the forest...
Posted by Sigmund Nastrazzurro at 10:47