While trying to find mechanical analogues for tetropters I stumbled upon some other technological innovations that might be transported to alien worlds as biological means of achieving flight. Some deal with heavier-than air flight, others with lighter than air. Let's start with the heavier than air designs, and leave the ballonts-like designs for another time.

On Earth, no animal has separate mechanisms for thrust and lift; instead, wings, and especially wing control, are subtle enough to combine thrust with lift. This holds for birds, bats, pterosaurs and insects, and of all these insect flight is in some aspects the most advanced, as insects can hover as well as fly forwards. Among vertebrates only hummingbirds are known to have evolved this ability. I suppose that this dual thrust-and-lift role is a typical example of biology performing much better than human creativity, and would not be surprised that advanced neural control is responsible for this superiority. But let us assume that separating thrust and lift can also work in the animal realm. In fact, I dreamed up such an animal once: the very first one I ever did on Furaha, in fact, Here it is: it has never before been shown on the site, and it is only a fragment of a larger painting. 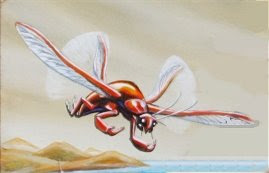 Furahan Propulsor mechanicus
Its scientific name is 'Propulsor mechanicus', and I have forgotten its common name (a 'zummer'?). What you can see is that its front pair of wings does not flap, but the hind pair flaps very energetically, and provides thrust on the upstroke as well as the down stroke of the wings. As such, these wings are very much like an insects' wings in hovering flight, but rotated 90 degrees so the thrust is directed backwards instead of downwards.

Mechanical flying machines nearly always have a separation of thrust and lift, and most thrust mechanisms cannot be used as an inspiration for animal flight, as there are rotary parts involved. But people have been trying to design working 'ornithopters' for ages, and some of these are interesting.

For instance, the video above show a design wing a large lifting immobile wing, and two hind wings that provide thrust. The source is here. The two hind wings flap up and down rather like the fluked tail of a whale, but where a whale has only one tail, this design uses two such tails, one above the other. According to the text they flap in counter phase to provide balance. The design reminded me a bit of the Uther design for the Epona Project, if I understood correctly how Uthers were supposed to move: Steven Hanly once told me that the animation shown on the BBC documentary that you can find in an earlier post was not at all what he had in mind. 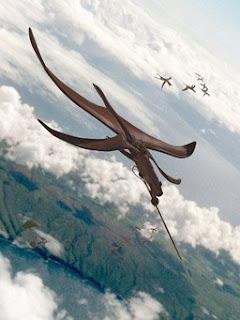 Eponan Uther by Steven Hanly
Uthers, one of which is shown here, have a large unpaired hind wing, and I think it provides the thrust while the paired front wings provide lift (Steven, please jump in if I got this wrong!).

If we leave the separation of thrust and lift behind, we can move on to more typical biological flight, in which each wings has both functions. But even then there are some interesting machines to be found. The typical body plan of a Furahan 'avian' involves a tetrapterate design with two paired wings. Some of you may have noticed that the first pair may overlap the second pair slightly, but in others, the two pairs are placed very far apart. he two images that follow illustrate the two variants. 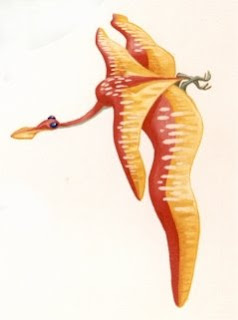 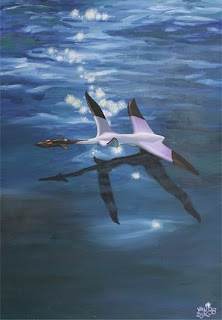 Furahan Seasoar
The idea behind the overlapping design was taken from sailing boats, in which sails that partially overlap work together to improve the boat's ability to make use of the wind. In aircraft 'canard' wings function similarly. I thought the same could be done with animal wings, hence the design. The other design also seemed fairly straightforward to me, in that the two pairs of wings allow great flexibility in how they are used: in unison or separately. I found ornithopter designs that I had never considered though, in which the two wings of one pair do not move up or down together, but instead one moves up while the other moves down. I do not think I like it, as this movement would cause asymmetrical stresses that seem impractical. Do not expect any Furahan animals to use this mode of flight. Still, people have built designs along such lines, and here is one:

This copy was taken from YouTube, but a much better quality can be seen on this page on the 'Entomopter' , which also shows a variant designed to fly on the planet Mars...

I will end with a design that I had not thought about and that I do find appealing. Take a tetrapterate avian like the bulchouk above, and move the first pair of wings even further aft so the two pairs are above one another. My first thought is that they would be in one another's ways, and they would. Still, if one pair moves up while the other moves down, you get a 'clap' effect, and those appear advantageous. In one of the previous posts on tetropters and micro air vehicles, two designs use exactly this type of wing plan: the Delfly and a Japanese design. Have a look again here; perhaps that is a design that one day will take to the skies as a fictional avian.
Posted by Sigmund Nastrazzurro at 15:03

The "zummer" reminds of a flying "crab" from the book "Beowulf's Children" by Larry Niven, Jerry Pournelle, and Steve Barnes. In the book the crab's stationary wings were formed from the flared edge of it's exoskeleton. While the mobile wings developed from a of pair limbs. It's been a while since I've it it though, so don't quote me. I'd love to see the entire picture the zummer was from.

Well, you did ask me to jump in regarding Uther flight....

Paul Birch's original design did indeed have the forewings stationary, providing lift, while the back wing "rippled" to provide thrust. I think the rippling came from the action of the hindwing flapping up and down very quickly, but no one I ever talked to was sure, or could explain how it worked better.

So we changed it. The forewings became oscillating propellers, and the hindwind more or less stayed stationary, "flapping" just a bit to counteract the forewings. So all of the art that I made showing the uthers follow this latter idea. The animation does indeed show the forewings flapping; my issue with it is that there is no twisting component to motion. Since the uthers evolved from flying fish-like critters, their wings move more like a manta ray's, not like a bird's. In the animation they flap slowly and flatly, instead of quickly and with a fluid rippling. (If that makes sense!)

There were other issues with the original uther design (such as center of lift not being the same as the center of gravity), the extensile muscle system debate (eventually handwaved and made to "just work"), and the issue of whether or not something of this density and size could fly on Epona (the answer is yes, according to the math). But that is the par for the course when doing speculative biology. :-)