All flying animals on Earth have bilateral symmetry. They can have two or four wings, but wings only come in pairs on Earth. Not so on Furaha, where tetropters have radial symmetry. I discussed them before on this blog. On Earth animals such as starfishes have radial symmetry: each of their five arms is like the others, and there is no left and right, nor is there a front or back. There are tops and bottoms though. Tetropters are similar: each of their four wings sticks out from the central body at a 90 degree interval from the previous or the next one, much as the blades of a helicopter stick out from its central axis. The similarity with a helicopter stops right there: helicopters are classified as 'rotary wing' aircraft, meaning the entire wing assembly rotates. Tetropters, being biological in nature, do not exhibit complete rotation.

Yes, yes, I know that flagellae do rotate, but I meant larger structures. I also know that a complete animal can rotate, but I was referring to part of an animal rotating completely in relation to the rest of the body and ending up with all body parts in the same position as before the rotation.

So the tetropter's wing beat to and fro, and up and down, and the wings rotate and change shape while they do so. Does this result in a believable animal? I thought so, but others might need convincing (hi Lewis!). So I started looking for proof.

But first, a few words on 'clap and fling'. The flight of insects is rather different from that of birds, and in part that has to do with their small size. Air appears more 'syrupy' at such small scales., which apparently changes aerodynamics profoundly. In larger animals air streams along lifing surfaces, and the stream has to be 'attached' to the surface. Not so in very small organisms, where things such as 'vortices' play a role.

Many insects use a mechanism called 'clap and fling' to increase lift: their wings, or pairs of wings, on the upstroke meet above their backs where they clap together. Before being pulled down they are rotated so their front ends are drawn apart while the trailing edges stay together. This apparently sucks air in between the wings, which promotes lift. Do not expect me to explain it, as the mathematics are way beyond me - I just accept it. 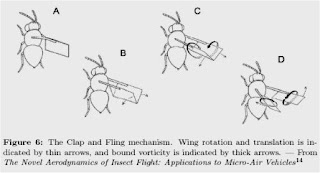 Click to enlarge
The above diagram shows the principles of clap and fling. It is the simplest I could find, and therefore probably too simple.

Back to the tetropter. When I first doodled them, some 10 years ago, I started thinking about the mechanics of radial wing designs, and I thought that a similar mechanism might work well. The thing is that an insect wing has only one clap in its movement cycle, but a tetropter wing can have two: it can clap against its neighbour in the clockwise direction, and half a cycle later it cn clap against its neighbour in the counterclockwise position. If one clap is good, surely two must be better? Based on that idea the tetropter flight took shape, and here it is:

I admit the animation is rather simple; the animal is depicted as a simple sphere, and instead of deforming during the clap the wings are shown as if they can move through one another. Still, you should get the idea. I am a bit proud of the design, as it might just be a feasible design that life on Earth hasn't come up with.

Now, proving that this could work might be difficult. Luckily for me, there is a lot of research being devoted to 'micro air vehicles'. No doubt we wil see tiny flying robots used for surveillance purposes in the future -that seems to be the drive behind it-. Some of these tiny aerial vehicles are fixed-wing aircraft, but quite a few use moving wings: such devices are called ornithopters, and, as with anything, there are websites devoted to them. Here is a nice ornithopter site.

A design that seems to be gaining popularity is the 'X-wing', meaning that the craft has two wings sticking out ate each side, placed one above the other. When these wings beat, the upper wing moves down and meets the lower wing moving up, so the two clap together. Mechanics is mimicking biology here, and as usual evolution has produced amazing designs. Some examples of such flapping ornithopters follow.


This one shows a rather large (for a micro air vehicle) ornithopter by Yuzuke Takahashi, but its size helps to show how the wings move. The original can be seen on YouTube here.

And now DelFly from the University of Delft in the Netherlands. Here is their website, showing various designs (unfortunately, their latest designs do not seem to be featured on the site).

The interesting thing about this design is that it allows the craft not only to fly horizontally but also to hover, simply by assuming a vertical position. So we have hovering flight making good use of a clap and fling mechanisms. Insects have been doing that for hundreds of millions of years...

Unfortunately for the tetropter, the designs I found are all based on bilateral symmetry. Surely someone has thought to extend the clap and fling mechanisms along tetropter lines? I asked the DelFly people, and they pointed me in the directioon of a small ornithopter jointly developed in California (Menlo Park) and at the University of Toronto, labeled 'Mentor', that was supposed to use a radial design with four wings. Rather frustratingly it proved difficult to find out much about it. I did find a picture though on one website: 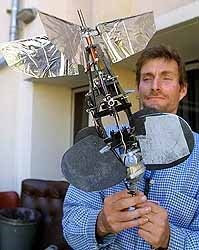 The text states that this is Roy Kornbluh from the Stanford Research Institute holding a robot capable of sustained flight. The device seems rather large to fly under its own power. Perhaps it is a large-scale model? More importantly, is its design indeed a radial one, or is it an X-wing like the ones shown above?
I wish I knew; a video of an ornithopter with a radial design would prove that the tetropter flight plan is more than just theoretically possible. Let's see if I can find out more...
Posted by Sigmund Nastrazzurro at 14:41