Originally, I had wanted to include the following material in the previous post, but I could not get hold of the material in time. What I am referring to is a paper in the 'Journal of Aircraft' by Zdunich P, Bilyk D et al., entitled "Development and testing of the Mentor flapping-wing micro air vehicle" (J Aircraft 2007; 44: 1701-1711).

In the paper, the author describe the development of the Mentor air vehicle and elaborate on the radial 'body plan'. They did not use those particular words, probably because they did not have biological mechanism in mind. The text makes it abundantly clear that the two pairs of wings beat against one another and use the 'clap-and-fling' effect. Here is a quote from the paper (I omitted references):

"In 1998, however, the primary source and inspiration for the Mentor's configuration came from the "clap-fling" hypothesis of Weis-Fogh, which was developed by observing the behavior of small hovering insects. It was found that they produced extraordinarily high values of average lift coefficient, which was well beyond any explanation based on attached-flow aerodynamic theories. The hypothesis, based on observation of the wings' kinematics, was that the two wing surfaces clap together and then peel apart starting at the leading edge. At the instance just before the trailing edges come apart, both wings have strong equal and opposite bound vorticity. Further, because the trailing edges were joined during this peeling action, the strength of the vorticity is much greater than that produced from Kutta condition considerations. As the wings fling apart they carry this "super circulation," which thus produces a high value of lift." 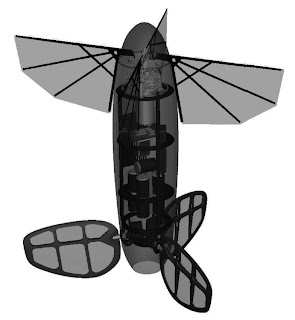 Here is a computer sketch of the vehicle. The wings are at the top, and the three blades below are control surfaces.

The authors did some proper preliminary experiments as a proof of principle. The most important such principle was that the clap-fling design indeed augmented lift. To do so they clamped their wing set-up to a lab bench and measured how much thrust it provided. They did this once with the complete wing assembly, i.e., the two pairs moved to and fro produced the double clap and fling movement. They then repeated the experiment with just one pair of wings moving back and forth. These wings obviously had nothing to clap against, thereby eliminating the clap-and-fling contribution to thrust. Thrust was of course less because there was only one pair of wings in this particular experiment, but that was easily solved by doubling the measured thrust value. A comparison shows how much the clap-and-fling effect contributes: 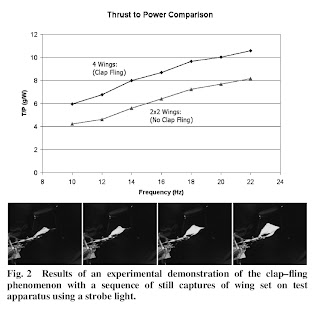 J Aircraft 2007; 44: 1701-1711; Click to enlarge
The resulting graph shows that the thrust-to-power ratio is higher at all wing beat frequencies if there is a clap-and-fling effect than if there is not. Well, that settles that! I will stop discussing the tetropter wing design now, as I think the case has been proven. Future posts may deal with some other intriguing flight designs I came across searching for 'micro air vehicles'. These could well be used for alien life forms.

But I cannot help adding a final remark, even though I may be accused of vanity. The quote above makes it clear that the design of the Mentor took shape in 1998. I checked my Furaha design sketch book for the first sketches of tetropter flight plans. I had worked out three 'gaits' producing different amounts of lift, tilt and rotary effects over each wing cycle, and remember settling on the one discussed here because it balanced all these effects nicely. The page dates from April 30, 1996. Perhaps there are others who came up with such a design earlier, but for now, I like to think that I was the first to design a radial body plan using a double clap-and-fling with a vertical axis. I need a snappier name for that. Anyway, I doubt that this invention will make me a millionaire...
Posted by Sigmund Nastrazzurro at 13:06