An experiment with digital 3D sculpting

Computers have created enormous changes in the creative arts, to the point where some artists never smell oil paints or India ink anymore, but instead merely hear the characteristic soft scratching sound of a stylus on a graphics tablet. I have not crossed over to the Digital Side yet, or at least not entirely. I am still hesitant to embrace Photoshop as the sole means for drawing and painting.

Then again, I have used computer graphics for many other things, from producing maps to depicting photorealistic planetary surfaces. The plant section on the Furaha site is in fact entirely computer-generated. I have now started using a bit of software that perhaps I should have considered much earlier. I had been looking for software to design 3D, that could then be depicted (in 2D) from any angle. The program Blender is completely free, but I found that the initial learning curve was very steep. I have now come across ZBrush, and while that has some odd quirks, it does allow you to more or less jump in and start sculpting. Mind you, it is not free at all, but at least there is a demo to play with. There are other similar programs (Mudbox), but ZBrush seems popular. Here are my very first and rather clumsy attempts to do something with it. 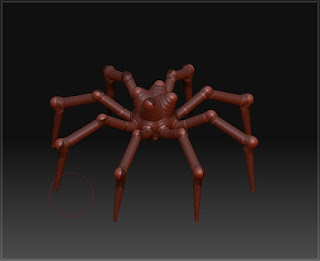 The program allows you to produce a quick first outline of a shape using interconnected spheres. There are various symmetry options, useful if you want to draw two limbs at once. As you can also produce 8 radial limbs, I started drawing a spidrid (if you need information on spidrids, go to the land section of the Furaha site and select 'walking with...') . What you see above is its basic body pattern, all drawn with spheres. 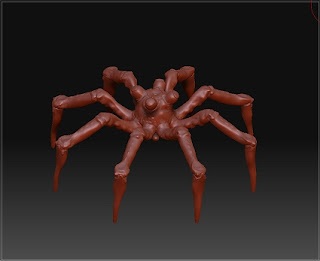 Click to enlarge
If you are happy with the spheres they can be turned into a mesh, which you can then push, distort, add to, etc., somewhat as if you are dealing with clay. And so, after some detailing, here is a spidrid in with some details added. 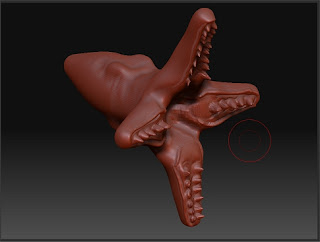 Click to enlarge
Another attempt - a failed one-. The evolutionary history of 'Fishes' on Furaha needs to be detailed, so I can show the early evolutionary changes from six jaws to four, and the subsequent dwindling and specialisation of two of them, and the loss of two of the four eyes. Why not jump in with the head of a Sawjaw? (go to the water section of the Furaha site). It has four jaws. To detail their inside I needed good access, so I started working on them with the jaws in an impossibly wide gape. I then thought I could rotate them to close them somewhat, but rotation of entire body parts is something that I haven't mastered yet...

Will I be doing entire animals in Zbrush, and stop painting them altogether? I think not; I still like painted 2D images too much, digital or 'real'. There is a risk of losing vitality if uyou produce computer-generated scenes. It takes extraordinary skills to overcome that, I think. It is evidently possible to produce very detailed shapes with ZBrush, but it is something else to produce pleasing images with the result. There are people who can, and as an example I would like to draw attention once again to the work of Marc Boulay and Sylvia Lorrain: one does the ZBrush modeling, and the other does the texturing and produces the images. Here is a link to my last post on their work, and if you follow the links there, you will soon find what I mean.
Posted by Sigmund Nastrazzurro at 11:21

Email ThisBlogThis!Share to TwitterShare to FacebookShare to Pinterest
Labels: ZBrush