A question for the audience: not alien enough, or too unlikely to be true?

There are only a limited number of people designing and illustrating their own worlds and life forms, and in quite a few cases their designs seem to converge on either similar biological designs, or on the work of earlier designers. In the first case 'convergence makes sense, as that is what evolutionary biology does as well. The second type makes less sense, if you ask me... Anyway, an example of convergence is that, if you wish to move quickly through water, streamlining is inescapable. There are many more constraints like that, and to be believable a design has too look biologically plausible.

But isn't that too limiting? Where are the limits in such designs? 'Cephalisation' is a recurrent trend in evolution, meaning animals tend to have heads, i.e., various organs and functions are clustered together near the front: food intake, sense organs and processing ability seem to form a package that comes with a discount if you buy all of them together. Can you do away with a head altogether?

How about limbs? I have discussed limbs and locomotion often enough in this blog and on my site that I will not repeat all that again: gravity and energy expenditure limit what you can do with legs. But there can be more or less than four. The current main group of Furahan terrestrial animals happens to have six, but rusps are quite common too, and some Giant Rusps, with 20 to 30 legs, give the hexapods a run for their money. And that does not even count the octapods or the five-limbed raptorial jumping spidrids.

Still, I do get the criticism sometimes that my organisms are too 'Earthy'. In part that is my own fault for having Furaha look so much like Earth. Perhaps I have shown too many parochial organisms. There are certainly some oddities in my sketchbooks that have not made it to the site.

One such follows: here are some arboreal predators; you might expect some lighting-quick brachiating animals jumping and swinging through the canopy, and these indeed exist (they're just not shown on the site either...). Instead, these are sneaky ambush-type predators, hidden in the canopy, preying on animals making their way over the forest floor. The one of the left might be descended from hexapodal stock, but the one on the right has a body plan all its own. As you can see, the predators can grip branches and can spear animals passing underneath. If that doesn't kill them, their poison will, and rather quickly to (it had better, or else the wounded animal will bound away and succumb somewhere beyond the predator's reach. 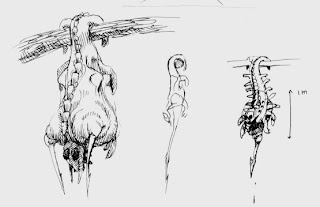 Click to enlarge
But is this believable? Is such an essentially passive and sessile life style workable? Wouldn't prey learn to spot it and simply choose another path? Isn't this an evolutionary dead end if the prey has good senses and is highly mobile? Personally, I am not certain, and so this particular type of predator is even more imaginary than the rest of them: I haven't decided whether to raise it to the rank of actual Furahan species or to condemn it to continual 'uncreation'.

I would like to ask the readers of this blog to comment on two sketches of plants (or mixomorphs, as the case might be). I did have a specific environment in mind, but would like to hear your opinion. Both are 1-3 meters in heigth. Species A is round with branches coming out of whorls on its body/stem, and species B is flattened sideways, and seems to sit on the ground rather than grow from it as species A does.

So, are these not alien enough, or are they too unlikely to be believable? 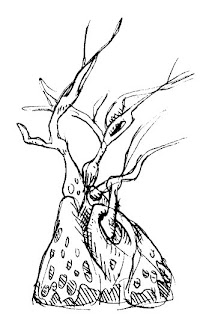 This is species A 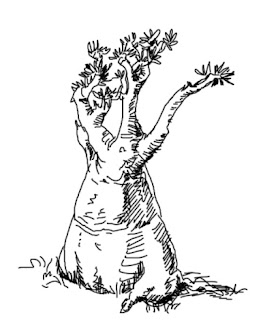 And this is species B
Posted by Sigmund Nastrazzurro at 16:53

as to the question of if prey would learn to spot the predators in ambush...wel, look at the flower-mimicking mantis or spiders of Earth, or how well sloths blend in (yes, some of all three groups get spotted, yet they survive)

as to the plants...both drawings look reasonable and believable.

Regarding the 'Hangbeest'. I like it. Also, it's entirely possible to have a creature that thrives, despite its apparent shortcomings - it just means we haven't figured out its 'trick' (see: Terran Bumblebee flight). Heck, maybe it's psychic!

Thanks, JM. I was a bit surprised about you using 'hangbeest'. I keep forgetting that, if you copy the image, you can read the name of the file I saved it as. A 'hanging beast' it is, then...

The Hangebeest seems perfectly likely, sort of like a cross between a chameleon and a tree sloth in lifestyle. I would expect it to be poikilothermic, to keep energy costs down until prey walks by. It is a perfectly reasonable body design, there are lots of ambush predators that live like this on Earth, crocs, snakes, mantids, etc., etc.

I don't see a problem with the plausibility of the hanging beasts as long as they aren't too big or too common.

For some reason sedentary ambush predators seem most common in very small or at most medium sized animals. That might be in part because earth invertebrates can survive with their metabolism on a slower idle speed.

Such predators might also make sense in a dry environment where they can lurk around water sources, or any other environment where important resources are in a few locations. Similarly mantises often take their position near flowers.

I wouldn't expect them to be too common--- or perhaps they have very slow digestion like snakes, and only pick off one victim from the path every month or so. In any event it can't mean certain death for their prey to use paths or visit waterholes, or the prey would leave or die out and then the ambusher would obviously die.

I like your suggestions about the slow metabolic rate of the 'hangbeest'. In fact, from now on, that's the way it is...

Species A looks like some sort of odd fungus/shrub symbiote.

Species B looks like any form of bottle tree. Which seems to be a common sort of plant in dry environments. Given that I've seen unrelated species of tree have a shape like that in different dry environments. (Madagascar's Baobap, Australia's Bottletree, those Socotran trees.) The thick tree stores nutrients.

Some animals do that too, like honeypot ants, found in the Australian desert (Which I've visited. (I'm heading back to Oz in fact this summer)

While it is good to have alien looking lifeforms its good not to go overboard like Alien Planet did.The Hangbeest seems to be perfectly plausible to me.Maybe its able to camouflage itself. Or maybe its able to look like the plants around it(think praying mantis).

With regard to the first portion of the post, and the basic problem of creating animals that look alien, but also look believable--I have to say (and I don't mean this in a derogatory fashion at all, mind you; I greatly admire the diversity and inventiveness of your creatures, particularly beasties like your spidrids, your radially-symmetrical fliers (their name escapes me at the moment), and your tube-shaped "fish") that quite a few of your creations do look a bit too similar to Earth life to be easily believable as products of a completely independent line of evolution.

That said, I don't know that I've ever seen speculative biology creatures created by ANY artist that really hit that sweet spot of "alien but not TOO alien;" legs, heads, and bilateral symmetry make a lot of sense, and certainly have evolved multiple times on Earth (well, legs and heads have, at least; I don't know about bilaterianism), but as soon as an artist incorporates them into an organism it instantly becomes familiar. Maybe strange symmetry is the answer? Spherically symmetrical animals, perhaps. Glide-shifted symmetry. Helical symmetry. The former precludes heads, the middle allows legs but only in VERY strange arrangements, and the latter allows a head but...well, I don't even know how such a creature might move on land. A corkscrewing gait, perhaps; I'm imagining something like a sidewinder snake that continually rotates as it travels.