One year ago I wrote an entry on Edd Cartier's work. Cartier was a science fiction illustrator in the 'golden age' of SF. I had seen a drawing of an alien being from his hand in the seventies, and that made a lasting impression. His most intriguing aliens were drawn for a chapter in a book called 'The Interplanetary Zoo' by David Kyle. A year ago I found a collection of the drawings from that book on a Japanese site, from which I copied them and removed the yellow backgrounds. Since then I have showed some of his remarkable creatures on my blog (here, here and very recently as well), reasoning that some things are so good that they need to be nibbled rather than gulped down. On the off-chance that there might be something new on Edd Cartier I typed his name in once more, and was surprised by the large number of hits. It turns out that Mr Cartier died last December at the age of 94. Apparently, his death resulted in a large increase in the attention devoted to his work and life. A bit sad that it took his death to bring that on, but at least there is more of his work to find now. Those who are interested in his illustrations for 'The Shadow' and similar works can do a search of their own or try their luck starting here or here. But a real treasure of illustrations of 'The Interplanetary Zoo' can be found on a website by a Mr. Door Tree called "Golden Age Comic Book Stories". The relevant entry is of August 30, 2008. It has no less than 16 of these illustrations, and in an enormous size too. The quality is much better that the ones I had found. Of course, I immediately proceeded to store them for my own amusement. Here, I will show you two of them, and add a little discussion of their biomechanical properties. 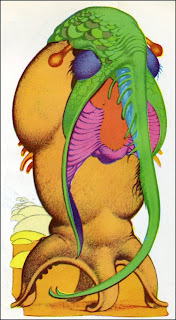 Click to enlarge
Walking on tentacles! That is a subject covered in detail in this blog, ending here, so let's not go into that again. But what an intriguing shape. The creature looks quite bulky, and his nether end with the short walking tentacles looks a bit underpowered. We will have to assume that this creature lives on a low-gravity world, or else tentacles will not function properly. There are no arms I can see (but perhaps it has them folded on its back?), but its proboscis ends in three tentacles. The middle one is long and ends in two fingers, so it looks like it would be useful as a manipulative tool. I take that as an additional indication that it lives on a low-gravity world, where it is easier to get away with boneless appendages than on a medium- or high-gravity world. The purple things look like eyes; they might be of the compound type, shared by many of Earth's creatures and by Furahan hexapods. Unfortunately, compound eyes have inbuilt problems limiting their resolution, so if they are to be good, they better be big. This creature has big ones, so it probably needs good vision. The bulkiness bothers me a bit, as low gravity allows a spindly build such as arthropods and spiders have on Earth. But allowing it is not the same as it being better, so perhaps there are other features that determine the evolutionary likelihood of being spindly versus compact than gravity. Any views on that? 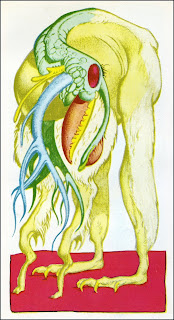 Click to enlarge
The colours make it slightly difficult to work out the three dimensional character of this being, but you can see it is a tetrapod looking back over its shoulders towards the right. The four limbs are spindly and equipped with long fingers and toes, giving it a feel like a race hound. The only thing wrong with that view might be the odd stance of the hind limbs. They are very columnar and do not visibly bend in the zigzag manner typical of Earth's mammals. Than zigzag bend is there for a reason; if gravity would be the only consideration, all legs would look like those of elephants: columns! The other reasons probably fall under the heading of manoeuvrability and speed. Otherwise, a beautiful design. The red thing is probably an eye. Just one eye does not provide much in the way of a safety margin for diseases etc., and this one does not look as if it provides all-round vision. This animal better have some superior other senses as well. Perhaps it has; its tentacles might be well-equipped with sense organs, or olfactory organs, or perhaps both. Oh yes, the same reasoning for tentacles applies as above, but tentacles dangling down may function much better than tentacles you need to stand on. The elephant's trunk is an example of a danglinfg tentacle, and that works pretty well. I think that this will be the last of my blog entries on Edd Cartier, unless something unexpected comes along. For one thing, I have no idea what the text was these images were meant to illustrate. I have not found any mention of that yet, but if it does come along, there might be a postscript.
Posted by Sigmund Nastrazzurro at 16:40

as to the top photo - maybe it's more inflated than bulky?

That is creative. Go on a bit: why would it be inflated? Very large lungs, perhaps?

well, lungs or maybe just flaps of skin (like some lizards), or little air-filled pockets just under the skin (like a cross between an octopus mantle & a lung)