Last time I showed two sketches of odd plants, and asked whether they were believable or not. There was only one taker: Rodlox; he thought both were believable. I had secretly hoped that someone would have considered both plants completely alien, as in reality only one of them was an invention of mine. The second one was drawn from a photograph of a plant right here on Earth. To prove that, here it is: 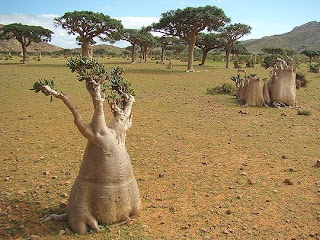 Click to enlarge (holds for the other images as well)
If you do not see the resemblance, that may be because I presented it as a mirror image of the photograph. The plant grows on the archipelago of Socotra, out in the Indian Ocean. The story of this island group is one of relative isolation, so there was little influx of mainland Asian or African species. Instead, evolution ran its own course here, and as always the results betray common biological principles, but recombined time and again to result in new and intriguing forms. "Infinite diversity in infinite combinations", I am tempted to write, but that quote is from Star Trek's Mr Spock. I have no idea what the text writers meant by putting those words in his mouth, but I doubt they referred to evolutionary biology (a pity, as the phrase seems very apt to use in a evolutionary setting).

I first heard of Socotra about a year ago when I read a book on plants, and one tiny photograph made me very curious. A few months ago, I came across more photographs on the internet, and now Socotra seems to be everywhere. That may be just me, though.

I have shown photographs of Terran creatures on this blog before, usually as an example of some biological principle. This time is different, as I will show Socotran plants only for what they represent: odd-looking plants, that may well be found in Furaha large deserts. And indeed, rather similar life forms can be found there.

After all, the usual plant shape with lots of leaves and thin stems results in an enormous surface to volume ratio. While this is good to catch lots of light, it does nothing to prevent evaporation. If water is precious, the little there is may not be allowed to escape into thin air, but must be stored. Few or no leaves, a rotund shape and anti-evaporation measures are all called for, and that is exactly what you see.

Some more examples follow. I will show some taken from two sources so I can acknowledge the photographers.

A first series is from Jan van Dorpe; the photographs can be found on Flickr: 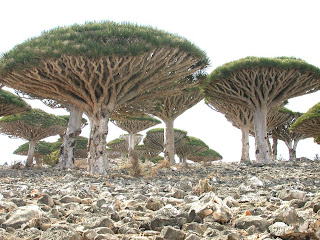 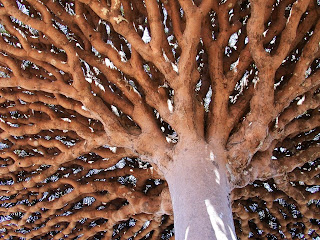 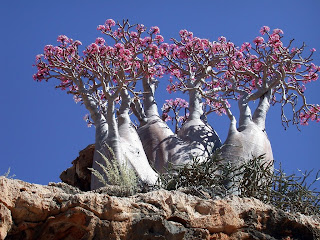 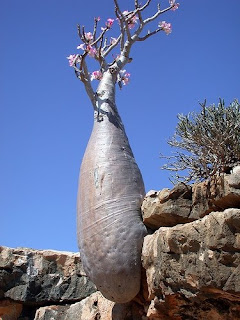 A second series is from Abdelkrim Belkilani and Loic Marchat; their site has many more images of Socotra. 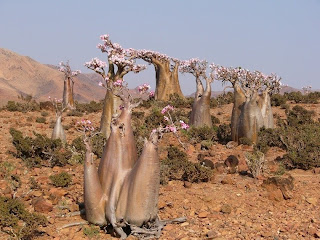 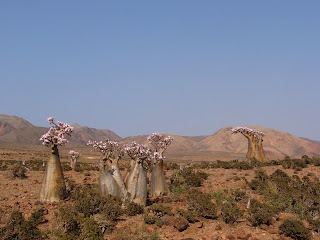 I think that I would like to visit Socotra; then again, Madagascar has its share of wonders too, and I haven't been there either.

First things first though... Life is hectic at the moment, which explains the hiatus in posting. But I am thinking about some intriguing themes for this blog:
- the 'clap-and-fling' mechanism is a known mechanisms to improve the lifting capabilitilties of flying insects. I borrowed it for Furahan Tetropters, and have started to think that this might make them superior flyers; now, to make that convincing will take some work...
- what are toes for, precisely, and why are the front legs in mammals not connected to the vertebral column by a solid weight0brearing connection, but -susually- by muscles instead?
:
Posted by Sigmund Nastrazzurro at 13:29

Email ThisBlogThis!Share to TwitterShare to FacebookShare to Pinterest
Labels: Socotra

I think it's really interesting that there are ways for plants to adapt in arid conditions in ways other than becoming extremely rotund and growing spines instead of leaves. The Adenium clumps and the Dragon's Blood Tree look definitely quite alien. I'm rather curious though, whether it's possible to imagine plant analogues that photosynthesize with "leaves" that are starkly different in morphology if compared with terran plants. Keep going on with the work !

One of the most intriguing plants on the island is the 'Dendrosicyos'; the arboreus gourd.

It is an ordinary gourd -- leaves are similar to those of squash, small yellow flowers are just like cucumber's -- except that it keeps growing vertically upward until the stem forms into a stout upright trunk finally to make a huge tree.

And what's more special is its tiny tendrils... Its ancestor's vestiges are absolutely of no use any more, but still it retains them.

I am so fascinated.