I discussed the Epona project in this blog recently, and stated that it was at its time the biggest and best-developed world of fictional biology. Here is a surprise; it might very well still be the biggest such project! The problem is that most of it was only visible to the few people taking care of the project, among whom Greg Barr was one the people holding it all together. The website never showed more than the beginning of he project, and did not even discuss the major life forms and their physiology. The good news is that part of the old website has now been restored (it was damaged by a virus or a hacker). So take a look there, and let's hope that more of the wealth of Epona data will yet appear for all to see.

Meanwhile, I can discuss a few glimpses. There is a Kingdom Myoskeleta. These organisms do not have a sketelon, neither on the inside nor on the outside. What they have is a set of extensile muscles without joints. That is right, extensile muscles, not contractile ones. There were no bones, hence no joints. By expanding on a specific site in a thick muscle rod, the rod could bend, stretch or spiral in any shape desired. This was no mean feat; the limbs of any creature with such extensile muscles acted a bit like tentacles. I remember writing a critique on these muscles along the same lines as later reappeared in this blog: there were four blog entries called 'Why there is no walking with tentacles': one, two, three and four. If you read them, you will find that I made a case for the development of joints in any limb destined for serious weight bearing. I think that the arguments hold for tentacles of any type, with contractile or extensile muscles. By the way, I thought that extensile muscles could perhaps be made to work in a roundabout manner, but that is perhaps something for another day.

The myoskelata basically consist of a barrel with a set of limbs at either end. There are five of these limbs, and in principle they branch into three 'fingers'. Here is such a basic organism: 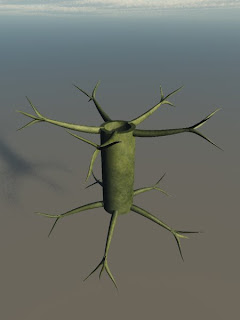 Click to enlarge
The Myoskeleta are divided into two phyla: the Myophyta, plants for all practical purposes (the other phylum is the Pentapoda; they're animals). Take the basic shape, drop one end into the ground to act as roots, and span a membrane between the five limbs: that is a basic Pagoda Tree. If you add a similar layer ('tier') on top of it, you understand the tiered appearance of a pagoda forest. You will be able to recognise this fivefold symmetry for most of the plants shown on the cover of the recent book on how to grow Eponan plants (see the Hades Publishing page on the Furaha website). 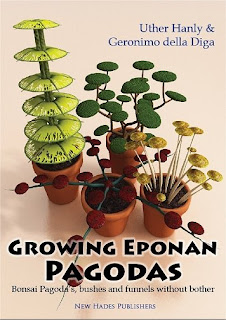 Click to enlarge
In principle these 'trees' can still move a bit, for instance to direct their leaves towards the sun. Intriguing, aren't they? I will add a few images of such Eponan forests. They are in development together with Steven Hanly.

Ah yes, I showed an image of a flying animal in the previous post. It was modeled by Steven, and is a pentapod, meaning its basic anatomy is similar to that of the trees it flies over. The species is a Uther, and it is intelligent. Life on Epona has developed intelligence, unlike Furaha (and the reason why there are no 'sophonts' on Furaha deserves mention on its own, one day). 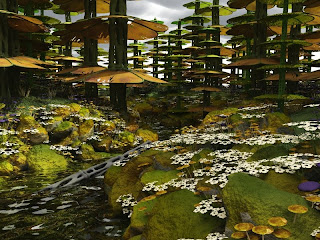 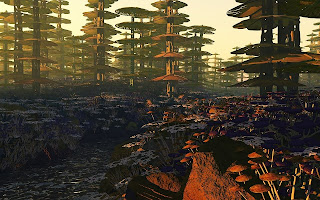 Click to enlarge
Somewhere else along the same stream.
Posted by Sigmund Nastrazzurro at 18:11

I was thinking about your entries on walking on tentacles, and that got me thinking about the extensile musculature of the Eponan lifeforms. The Eponan extensile muscles work by filling with liquid, much like a piston. It has always been implied that there is a "lymph system" that stores liquid distributed all over the creature's body, but some liquid could be taken from adjacent muscle rods.

So, imagine a bundle of straws, each straw representing a muscle rod. At any one point, only 3/4 are filled with liquid, with the rest left as "gaps". Imagine further that these muscles alternately flex (or inflate/deflate) such that 3/4 or so are always supporting the load, with the rest left to allow for vascularization.

Another thing to remember is that due their construction, when the muscle rod gets longer, it also gets thinner. So if 6 extending muscle rods surround one relaxed rod, there should be a bit of room; although the entire extending limb gets thinner macroscopically as well.

Besides, I like my aliens to have tentacles, and I just can't bring myself to admit that they can't work!

Tentacles can and do work! In low-gravity environments such as under water they do quite well, and in high-gravity environments (on land in our type of gravity) they are good for pulling. In all cases they are better for pulling than pushing. That works for extensile as well as contractile muscles: when a flexible contractile muscle starts to shorten, it will automatically form a straight line between its two attachment points. With an extensile muscle, there is a risk that it will deform when it pushes againts its attachment points: it wil buckle. The only way out is to make it extremely stiff, such a a real piston. That seems difficult to me.

I will send you my original critique of extensile muscles by email. It is too long to post here.