So they have a Propellonectes on display in Brussels, but on the websites of the artists who designed it is a Calcitriornis.

If the previous sentence makes no sense to you whatsoever, please read the entry dealing with this subject first. In effect we are talking about an exposition in Brussels that includes some future animals. I had been using Google to find out more, but need not have bothered, as the material I was looking for is available on the websites of Marc Boulay and Sylvia Lorrain. The three sites contain largely the same material but are not identical, so it pays to visit all three. 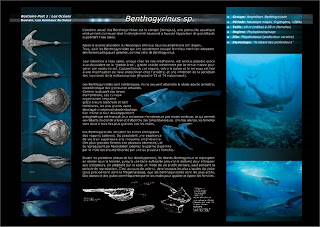 Click to enlarge
© Marc Boulay / Sylvia Lorrain - ADAGP Paris 2000-2009
© Jean-Sébastien Steyer - CNRS 2000-2009
I will just show you some images of 'Benthogyrinus' to make you curious. What you see here is a poster-like image with some explanatory text. This states that we are looking at the very last amphibians, descended from the frog genus Xenopus. The species now is an ocean dweller, filling the niche whale sharks once lived in. The animals have developed a salt-excreting gland allowing them to cope with their salty environment. They do not actually look much like frogs, but there is a good reason for that. They are neotenous, meaning that they become sexually mature while formally still being in a larval stage. In effect, they are giant tadpoles. Very giant tadpoles, as they measure up to 20 meters. The males are two or there times smaller than the females and are shaped differently. The next two images illustrate all this nicely. 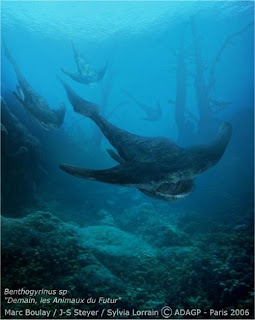 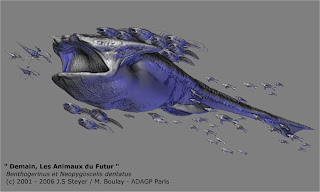 Click to enlarge
© Marc Boulay / Sylvia Lorrain - ADAGP Paris 2000-2009
© Jean-Sébastien Steyer - CNRS 2000-2009
By the way, if you see a heading 'demos' on their websites, do click on it, as it will lead you to some 'exe' files that provide a slide show with music showcasing their work. Those are definitely worth taking a look.

Nice as all this is, it does not explain why Calcitriornis is the same as Propellonectes. Calcitriornis predates Propellonectes, as is evident from the copyright dates on the images. The answer is given in one of the interviews, and if you want to read it, there is a link on Boulay's site. Here is part one, en here is part two if you need a shortcut. The interview dates from 2006 and mentions a plan for a park on evolution, and that was to contain a section called 'Demain; les animaux du futur' ('tomorrow; the animals of the future'). The same protagonists were involved that we encountered in the Brussels expo: Steyer, Boulay and Lorrain. I do not know whether Dixon was formally involved, but the text makes it clear that they were in contact. That probably explains the traces of his 'Zoology of the future'. Unfortunately for those of us who like such things, nothing came of the plans.

That is sad, but at least it explains the history behind the Brussels' beasties: they were part of an earlier attempt to create a new future. I wonder whether we will hear and see more of the plans from this trio. I hope so.

Oh yes: Jean-Sébastien Steyer has written a book on life before dinosaurs; compared to the dinosaur era that is a time that deserves more attention, and the book looks very good. It is in French, and here is a link.
Posted by Sigmund Nastrazzurro at 11:13

Wow! My roof is blown off... Even the grandpa Dixon hadn't invented such monster...

They're good, aren't they? Please visit their websites, as there is more.