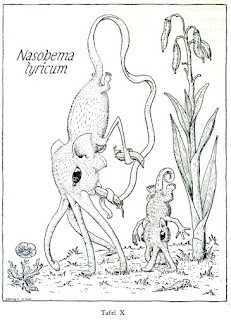 One of the best known examples of fictional life must be the 'Rhinogradentia'. This word, composed the usual scientific hodgepodge of word stems from first Greek and then Latin, means 'nose walkers'. And that is exactly what these odd little mammals do: they walk on their noses. If they do not use them for walking, there are other uses too: for example they catch insects with them, either by mimicking flowers or by entangling them in mucus. The one above doesn't do anything as fancy: it simply walks on its nose.

The Rhinogradentia were first described in a little book published in 1957, entitled 'Bau und Leben der Rhinogradentia' (Literally: 'Build and life of the Rhinogradentia'), written by Professor Dr. Harald Stümpke (that is what the book would want you to believe; the real author is Gerolf Steiner). The book has later been translated into English (the snouters), French (les rhinogrades), Italian (i rinogradi) and Japanese (sorry, no idea). My copy, a German one, dates back to 1981, and contains line drawings in black and white.

The book is still available, certainly in German and English, which probably says a lot about its qualities: it is still funny and entertaining after 50 years. It has received quite a bit of attention on the internet as well. It featured in the 'Tetrapod zoology' blog, not just once but twice, and there is even a Japanese site showing photographs of models of various Rhinogradentia. These look very much like the original drawings. I would be curious to read the text, but Google's translation services leave enough to be desired when it comes to Japanese to leave it unsaid.

The drawing shown at the top depicts the first 'Nasling' designed by Steiner, so in a way it is the prototype for all others. The very first drawing may not exist anymore, as it was an aquarel given to a student out of gratitude for having given the author some asparagus (more on why asparagus was important in the second instalment). The drawing was inspired by a poem by Christian Morgenstern; it starts as follows:

(Literally: 'On its nose strides the Nasobema, accompanied by its child'). Regardless of any poetic qualities, you can see that the drawing certainly does justice to the text. The word Nasobema, by the way, means 'nose walker', but here the word for 'nose' is Latin and the one for 'walk' is Greek, just the opposite of 'rhinogradens'. I guess the biology doesn't really make much sense: the animal still has perfectly functional limbs, and there appears to be little evolutionary reason to develop an alternative mode of locomotion under these circumstances. But the fun of Steiner's work is that it is so well carried out otherwise that you immediately overlook such matters. There are life histories, quotes of (equally nonexistent) scientists, and many more details to entertain the reader. 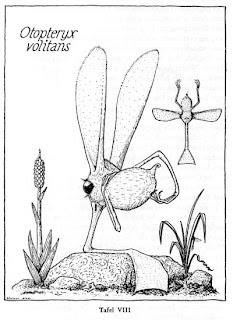 Just one other example should wet the appetite for more nosewalkers. The drawing above shows Otopteryx volitans. The discussion starts whether it was sufficiently evolved to separate it from the other Hopsorrhines (it turns out it isn't), and then delves into its flying habits. It flies backwards... Landing and taking off are disussed as well, which is proper if you start thinking about it: flipping the tail downwards and backwards must have some interesting aerodynamic effects! The text states that its fur glistens so much that it resembles a humming-bird. 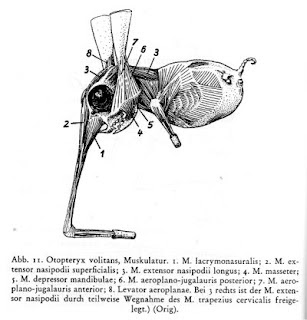 The other two drawings show the love of detail. I left the legends in, even if not all readers can read the original German text, simply to give a feel for the work.

The next instalment will provide a bit of background. To end this one I would like to report something of interest: while searching Google, I came across this intriguing mention: apparently someone in 1970 named a real butterfly species 'Rhinogradentia steineri'. So they do exist, in a way...

Posted by Sigmund Nastrazzurro at 12:30