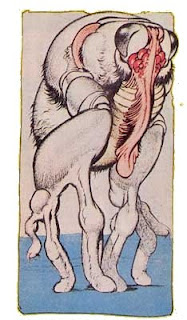 It's time to bring another of Edd Cartier's wonderful drawings back(I've found about 10, so we haven't run our yet)

Now thís is really an odd design. People who design alien lifeforms often try to get away from the shapes we know to enhance the alien nature of their designs. I have my doubts how far you take take that line of thinking, because biomechanics will work the same all over the universe. If you wish to swim, streamlining is efficient, given certain characteristics of size, density of the fluid, etc., etc. Leave that as it may be for the moment, and approach the problem from a different angle: perhaps an alien design works as such if you cannot immediately work out what the general build of the animal is. If you wonder 'how does this thing work?', then the designer may be onto something.

Like the previous one, this creature seems to have a rotund body slung between two walking limbs. The limbs divide in separate parts, but that is nothing novel: our legs also end is toes, and the prototypical arthropod limb also is 'biramous', meaning it has two branches. But this one is slightly different, in that the split into 'toes' happens fairly high op the limb itself, so the 'toes' take on an aspect of legs themselves. They seem capable of somewhat independent motion. If our legs would split into two separate 'leglets' at the level of our knees, would we say that we had two lower limbs or four?

Never mind, but the point is that this is a shape that takes some study before you start to see how it works. As such, it's delightfully alien.
Posted by Sigmund Nastrazzurro at 19:07