Finally the work of making a texture for Furaha is nearing completion.

After ample deliberation I decided upon places for likely deserts, based on some understanding of Earth's climate system. I did receive help, but in the end I confess there was lots of guesswork. It was good to have that major hurdle out of the way, as I could then concentrate on creating the texture itself.

To do that, I needed to become more used to Photoshop (never mind 'proficient'). In the end I took published maps of Earth (NASA's 'Blue Marble' series), and I cut bits and pieces out of these maps, and pasted them, with some rotation if necessary, on my new map. I used some of Photoshop's tools to bridge the borders between these pieces with believable intermediaries. That took some time, mostly because I was learning this as I went along.

Having done that, it was time to create some shallow seas, done by lightening a few pixels here and there near some coasts. And there we are! The real texture is much bigger than shown here, by the way. It is probably much too light, but that was handy during construction to see what I was doing. Compared to the Blue Marble pictures, this texture is much too bright, so it will probably has to cross over to 'the dark side' before I post it on the website. 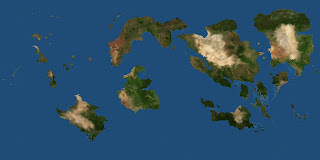 Click to see in a bigger window
That's not all though, I also worked on a programme to cover part of the land with snow and ice, depending on the season. You can see the result for Earth below. I can of course do it for Furaha, but the advantage of doing it with Earth is that the result at least allows an idea of how well it all works. The programma works by taking the distance from the nearest pole (latitude) as well as elevation into account. These are combined in such a way that the chances of snow cover are bigger as you come nearer the pole and as you get higher up.
The same is true for the Earth: mountain tops may be covered in snow when there is no snow at all in the surrounding valleys, and the nearer you get to the equator the smaller the chances of finding a snow-covered peak are.
Where the program goes wrong is in forgetting about precipitation: the definition of a desert is a place with very little precipitation; and when there is no rain or snow, you do not get an ice cover, no matter how cold it is. The Tibetan plateau may be such a place: there should be no snow, but the programme puts it there. Oh well; that can be edited.

Click to see in a bigger window
What's left? Well, rivers, lakes, sea ice that changes with the seasons, seasonal changes in the colours of the land due to plant life, etc. Much to do yet...
Posted by Sigmund Nastrazzurro at 19:52