Scaling, or 'size matters, but so does gravity'

How do you show a mouse and a dinosaur in the same picture to illustrate the difference in size? That odd question came up while I was preparing for this post. The theme is how making animals bigger, 'scaling', affects not just their size but their shape as well. Scaling is of interest for speculative biology because gravity plays a role, so how do gravity and size interact to determine the overall shape of an animal?

It is not rare to read statements to the effect that animals on a high gravity world must have thick columnar legs and those on a low gravity world will have spindly legs. In fact, I have written several such statements in this blog. The problem is that these statements are not very precise. After all, thick-legged elephants and spindly-legged spiders share the same gravity, so such statements are at best incomplete. There are several excellent books on scaling in animals (here's one that is easily available), but none deal with the added effect of different gravity. This post will not do that either; gravity will be dealt with later. Before discussing it another matter deserves attention: how will legs look if their only function is to act as pillars to support weight. In reality, they move, and that requires other design characteristics as well. Some knowledge of mathematics is needed. 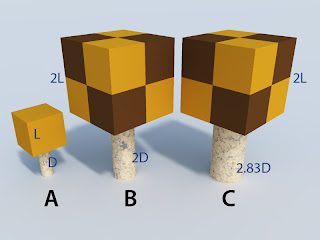 Click to enlarge; copyright Gert van Dijk
Let's start with a simple thought experiment: a small block sitting on a column, marked A in the picture above. The column has just the right width to support the weight of the block sitting on it without collapsing. The cylinder stands in for a bone in a leg. Its capability to support weight depends on the surface area of its cross section. Suppose its diameter is D: the formula for the cross section contains D^2. The actual diameter in centimeters is not relevant; what is important is that an increase in diameter is accompanied by a larger increase in cross section: doubling the diameter increases the cross section four times, and a triple diameter causes the diameter to increase nine times. You all knew that, I guess.

The block sitting on the leg can be described by the length of any of its edges; let's call that L. The volume of the block is given by L to the third power, here written as L^3. We are more interested in weight than in volume, and weight depends on several things: the mass of the object and the force of gravity (which we will forget about for the moment). The mass of an object depends on the relative density of the material (whether it is light or heavy; we will also forget about that) and of course on the volume of the object. The weight of the block is proportional to its volume, and so to L^3.

Now let's make everything bigger by multiplying every length measure by 2: both L and D become twice as large. That is situation B in the image above. The weight of the block is 8 times larger than it was: it was proportional to volume, L^3, and the new volume is (2L)^3=8L^3. You can check that visually: the old block fits 8 times in the new one. The diameter of the column has doubled too. The original diameter was proportional to D^2, so the new one becomes (2D)^2, or 4D^2. In other words, it has become four times as big. It can therefore carry four times as much weight as the original column. That is nice, but it is not good enough, as the block sitting on it has become 8 times heavier!

The only way to get around this is to redesign the width of the column. By how much does the original diameter D have to be changed to support a block weighing 8 times the original one? The answer is that the column's cross-sectional area must become 8 times larger than it was. That equation is not that hard to solve. If a scaling factor x for the diameter is introduced, so the new diameter becomes xD, the new cross section will become (xD)^2 which is x^2D^2. The x^2 bit says how much larger the cross section has to become. which was 8 times; hence x^2=8. X is the square root of 8, or about 2.83. So the new diameter should not be doubled, but should increase by 2.83, and that is what was done in situation C, shown above. 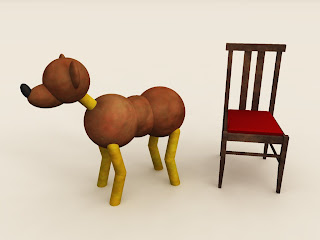 Click to enlarge; Copyright Gert van Dijk
So this is why large animals need relatively thicker legs than small ones: cross sections depend on squaring a length measure and weights on raising it to the third power. For my next trick, I illustrated this for a stick animal. I made a 'Disneius caniformis (varietas hortiformis)', i.e., the garden-variety cartoon doggie, shown above. Its body and head consist of spheres, and these correspond to the block above: as for a block, its volume depends on a length measure raised to the third power. The legs and its neck are coloured yellow, and correspond to the column above: the diameter of these yellow body parts will be adjusted to the weight of all the brown parts. D. caniformis above is one meter in length, so it is the size of a large dog. The chair is there to give some idea of scale. 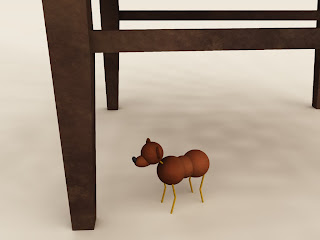 Click to enlarge; copyright Gert van Dijk
Let's do some fast evolution and evolve a cousin that is 10 times smaller, so the size factor is 0.1: D. musformis. It is only 10 cm long and weighs 1000 times less than D. caniformis. The diameter of its legs was altered by a factor 0.1^1.5, or 0.0316. The result is an animal with different characteristics, much more fitting with a small animal. You may wonder why I did not splay its legs sideways or bend them more, but such matters will be kept for another post. 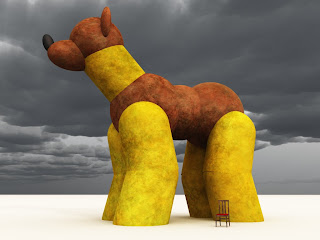 Click to enlarge; Copyright Gert van Dijk
Evolution could have gone the other way, so the size factor becomes 10. The resulting D. giganticus is 10 m long and 1000 times heavier than D. caniformis. This animal only has equals among dinosaurs and a few of the largest mammals ever. Its legs have become truly colossal: their diameter has increased by a factor 31.6! (that is 10^1.5). You may well wonder whether such an animal is still practical: after all: the enlarged legs now make up a much larger portion of its body mass than for D. caniformis, while doing the same thing: allowing the animal to stand. 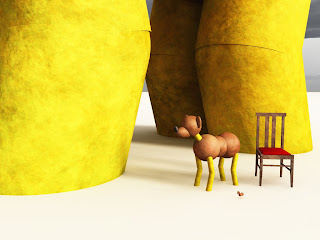 A warning for those who are still reading this: there is quite a bit of evidence that the mechanics explained above do work. For instance, within bovids (cows and their kin) bone diameter is related to bone length along the principle explained above. Here is an internet page which explains some of the same things and shows some factual data (my data are from other sources). Most bovids look rather alike, and that may help explain why the relation fits so well. If you take mammals of all shapes and form, the fit is less good and skeleton mass does not increase as much as it 'should'. There appear to be various reasons for this. The most important one is that legs move, which, as said, poses other demands on their design. So please do not start designing animals with exactly these configurations, as that may be incorrect.

Similar thoughts hold for other organs and tissues. For instance, the force a typical mammalian muscle exerts is proportional to the cross section of its fibres. Do you see the problem? When you double an animal's size the mass of its muscles increases eightfold, but their strength only increases fourfold. Relatively speaking you have made the animal weaker! Very complex, animal scaling; it's a god thing the effects of gravity are less complex...
Posted by Sigmund Nastrazzurro at 15:26

One thing I'd be interested to see is how density factors into the equation. For example, what's the average density of a human body? Or other animals? How light could you make the legs and still maintain necessary strength to support given weights?

Density directly affects mass and thus weight, and is therefore important. Many animal tissues are basically water, with important exceptions for bone, which is significantly heavier, and lungs, if you include the air in them. If bones were made of a lighter but stronger material, you could get away with a more slender skeleton, everything else staying equal. Inventing muscles that provide more strength for their mass than ours do would also help. With such alteration you could obtain animals with legs more slender than an animal with conventional bones and muscles could afford to be.

Another thing I've been pondering is if the same formulas for upscaling and different gravity apply to the surface area of wings. Obviously atmosphere density would have to be factored in, but other than that are the calculations pretty much the same?

Lift is proportional to wing area. Take a flying animal, and multiply all its dimensions by three: its mass (~weight) increases 27-fold, but its wing area only nine times. To get the same relative lift the wing area will have to increase 27-fold, which requires multiplying the original wing dimensions 5.2 times instead of 3 times (and a bit more because the larger wing increases weight, etc.). So yes!

Excellent, thank you! So, if I understand correctly, then if you have that 9x creature with 9x wings, but put them in a 3x density atmosphere then they will have sufficient mathematical lift?

Also, where did you get the number 5.2 from?

Yes: if you increase density 3 times lift will be restored. Here is another example, but now the animal's length, width and size are multiplied 4 (n) times.
- Its area (including wing area) grows with the square of the multiplication factor, so becomes 4x4=16 times larger (n^2).
- Lift is proportional to wing area, so lift increases 16 times.
- Its weight increases with the third power, so becomes 4x4x4=64 times larger (n^3)
- If the original lift:weight ratio was 1:1, keeping it aloft, for the bigger animal it is 16:64, or 0.25:1. That is 4 times worse (n)
-How to restire that?

A. Make the wing area 64 times bigger than originally. The new multiplication factor is the root of 64, or 8. Wing area if length x width, and if each becomes 8 times larger, the area is 64 times larger. You get that as the square root of n^3. With n=3, that is 5.2.

C. Fly faster. The effect of velocity in the lift formula has to increase 4 times (n times). as velocity is there as a square, velocity itself has to increase with the square root of 4: make it fly twice as fast. (it will drop like a stone when it attempts to slow down to land)

I hope this helps

It does help. Thank you!

Sorry about the typos; I was in a hurry.