The Diary of Inhuman Species III

Over a year ago I last paid attention to The Diary Of Inhuman Species. I thought that the sheer good natured fun of the creatures there might offset the somewhat depressing tone of the previous post. That tone was due to the inept designs shown by the Discovery Cahannel in their series "Into the universe".

Stan, the author of The Diary, has been very active in the meantime. He has followed his book by publishing stickers of a few of his creatures, and then asked people to send him photographs of any scene whatsoever, but one of his stickers had to be present in the scene. Together with some friends he has produced a very nice film showing giant spider creatures. Their movements are particularly fluid and quite convincing, except of course for the fact that no creatures of such size can walk with such relatively feeble legs. But in Stan's case I do not mind such obvious errors, whereas I do when the Discovery Channel makes mistakes. The reason is that the Discovery Channel pretends to be serious and therefore deserves a critical response. The Diary has no such pretensions at all. Having said that, what response does the Diary deserve? Have a look at a few of his recent creatures and form your own opinion. Here they are: 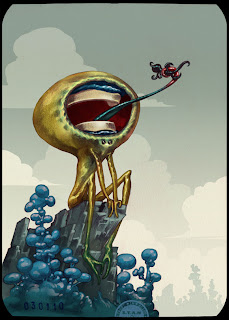 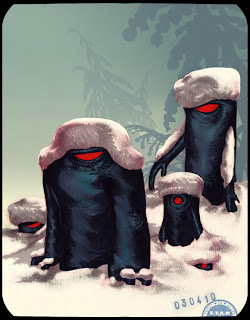 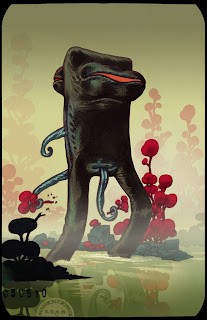 Click to enlarge; copyright Stan / Grograou
For me, they show that the artist had great fun in making them, and I find their exuberance contagious. I also like the changes in style. 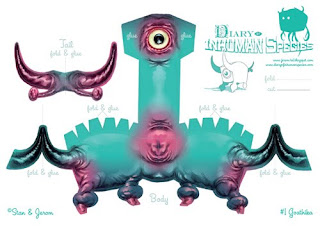 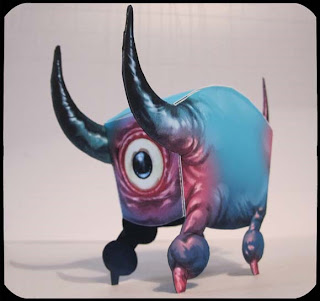 Recently he posted a 'paper toy', which is a model of one of his creatures that can be downloaded, printed, cut out and glued together. The original is to be found here. I immediately started thinking whether I should do one too...
Posted by Sigmund Nastrazzurro at 12:23

You should. I'd love to have some paper models of furahan hexapod predators and prey loping across my desk...