Why there is no 'Walking with tentacles'... V

The series of posts on 'Why there is no walking with tentacles' was supposed to have ended in December 2008 (see posts one, two, three and four). To summarise, I argued that a land-based existence of a tentacled animal would induce rapid evolution. The tentacles should evolve the ability to bear weight, which boils down to resisting compressive forces. Pure tentacles, without any solid bit in them, cannot do that, or very inefficiently at best. So I envisaged the development of incompressible elements. The Walking Tentacle Mark II was a bit like a string of beads held in place by surrounding muscles. The next stage would be a reduction in the number of elements, resulting in proper legs, no longer worthy of the name 'tentacle'.

But recently I read something very interesting about Earth's cephalopods (squids, octopuses, etc) that shines another light on the ability of cephalopod tentacles to function as legs. By the way, the usual term for octopus tentacles is 'arms', and only the two prey-catching appendages of squids are called 'tentacles'; their other appendages are called arms as well. Because I am looking at their function I will stick to 'tentacles' here. My interest was piqued by the following sentence: "... flexible arms, with no joints as fixed reference points, cannot discriminate between shapes, however elaborate the brain." I found this in a section entitled 'What has limited the evolution of cephalopods?' in a book by Janet Moore on Invertebrates (the book is quite interesting for would-be animal designers).

If cephalopods indeed cannot feel well enough to tell shapes apart, that is bad news for having their tentacles turn into functional legs. In man, the ability to sense where our limbs are enables us to walk in the dark and to recognise objects by manipulating them. I will come back to the importance of this sense, called proprioception, later. First I searched for more data on tactile function in cephalopods. Luckily, there is an excellent summary in Scholarpedia, so everyone can read it. 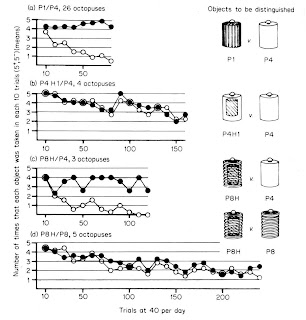 It turns out that octopuses are quite good at feeling the texture of an object, and you can teach them (using rewards etc.) to tell two objects apart that have the same shape but a different texture. In the graph above octopuses were given two different objects, and they had to learn how to tell the two apart. When the two lines with black and open markings diverge, the octopuses managed to learn the difference, but when the lines do not separate, the octopuses hadn't a clue what the humans wanted them to learn. At the top, the octopuses quickly learned that a cylinder with grooves is not the same as one without them. But if you give them cylinders with the same surface texture, but with a different mass because one has a weight hidden in it, they have no idea. They cannot tell a heavy from a light object. The remaining two graphs were control experiments proving the same thing. Other experiments also showed that octopuses are indeed very bad at recognizing shapes. The most likely explanation is that they cannot judge well where the various parts of their limbs are in relation to other parts.

The Scholarpedia review does not go so far as to state, in contrast to the book, that it is the lack of solid parts that is to blame for this, but that does make sense. Consider our limbs, or those of insects for that matter. Telling where the end of the limb is requires two things: the first are sensors to tell the degree to which all joints are bent, and the second item of knowledge is a table containing the lengths of all segments in-between the joints. In fact, working that out does not require more than fairly simple trigonometry. Can an octopus do the same? The lack of joints makes it more difficult. What it would need is some kind of sensor that can tell where it is in relation to another one in theedimensional space: direction as well as distance. Off the top of my head I cannot think of any biological sensors like that. The point is not whether any exist, but that the octopus doesn't seem to have any! One more reminder that alienness can be found on our doorstep.

Do you actually need propriocepsis? Humans do! There are a few people in whom this sense has been wiped out completely by disease, and these people cannot tell the position of their body and their limbs without looking. Most cannot walk, even though their muscles are fine. There are many more examples showing that the ability to feel where your body is in space in extremely important for human, and I would guess vertebrate, control over posture and movement.

What I find hard to understand is how the octopus moves about without such an option. The clip above shows an octopus disguised as some plants walking over the sea floor (on YouTube here). That is impressive, and there are many more video's showing rather impressive feats of movement. Their control over their tentacles must be organised differently from the way we control movement. Again, they're rather alien. 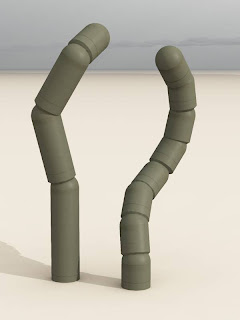 Click to enlarge; copyright Gert van Dijk
Can all these problems be reconciled with turning tentacles into walking limbs? Well, yes. After all, the Mark II had evolved a series of incompressible elements with joints in between them purely for mechanical reasons. Those elements of the Mark II are shown on the right in the image above. On the left is its successor, a proper leg with a reduced number of segments. The Mark II set-up is just what is needed to allow propriocepsis like ours to evolve; I am assuming here that it is advantageous to have such a sense. If there is a small sensing error in each limb, having a large number of short segments adds up to more uncertainty about where the limb is than having a smaller number of longer segments. Reducing the number of elements was better mechanically anyway, and may also allow a more sophisticated, or at least more reliable sense of position as well. There are probably advantages in the motor control of movements as well, but I think I will skip that (or reserve it for another post, who knows?).
Posted by Sigmund Nastrazzurro at 17:39

I love this series!

The test you referenced IMHO is making a different point than the one that octopi can't feel shapes. I.E. I'd interoperate that to mean that they aren't interested in *weight* -- which makes sense to me. In their underwater environment the weight of something is probably seldom relevant.

Thought it wouldn't surprise me if their proprioception was really bad compared to a joint-limbed creature. Aside from the technical difficulties of making proprioception work without joints, i'd think soft-bodies creatures have much less use for proprioception. They aren't going to stub a toe, or bang a knee into an obstacle if they judge distance wrong. If you place a foot slightly wrong, you can fall and hurt yourself-- quadrupeds to a lesser degree than bipeds. There doesn't seem to be any similar danger that octopi need proprioception to avoid.

I'd love to see how well elephants trunks are with proprioception, but some basic searches got my nothing useful.

"the mathematics to do that is fairly simple goniometry"
-- you mean "trigonometry"?

"...they cannot tell the position of their body and their limbs by looking."
--you mean "*without* looking"?

The octopus 'sensory' problems go further than not sensing weight. Weight is probably indeed not that important, but what it probably stands in for is mass or inertia, which remains important under water. The text does not go into detail but consider this: "Octopus does not take into account the relative position of suckers".

As for the typos, thank you for calling them that, but they are in fact errors. English is not my native language, and I would be happy to reach a near-native level. The 'trigonometry' you learned in school was my 'goniometry' (both are probably correct). The 'by/without' mistake is one of the trickier ones. I suppose it would be correct to say 'they can tell by looking', and my language instincts only call for one negation, not two. But languages are not logical. I'll correct them later.

It's funny you should mention elephant trunks; I've tried to find out more about them, including details on whether their length is fixed, their proprioception and their cortical representation. Not easy to find.

A potential proto-terrestrial cephalopod could also evolve incompressible elements in some of its arms in order to help it maneuver along the ground (similar to anglerfish). There is at least one cephalopod, the flamboyant cuttlefish, which already has an anglerfish-like method of crawling on the ground.

I agree with J.W. in that in a watery environment, it would probably be very difficult to determine the weight of an object.

And developing nerves to check their positions relative to one another along the tentacle and develop a form of proprioception shouldn't be too hard to do.

Sigmund:
Good point, inertia would still matter to them underwater.

Anyone who learns English as a second language has my sympathy. I would judge that you *do* have a near native level-- at least in writing. Your posts on what we must admit is an obscure topic are entirely readable. "Goniometry" is apparently a proper english word, if an obscure one.


The elephant's trunks are our one big example of a terrestrial non-jointed "limb". For manipulation, not walking of course. Without them we'd be stuck with semi-prehensile tongues as examples of what a non-jointed limb might be able to do out of water.

I couldn't even tell English was your second language, to tell you the truth. You write better than half the English speakers I've seen on the Internet.

I was thinking, would a soft and flexible internal skeleton made of ultra-strong fibers which could rapidly turn very rigid be a solution for this?

Got the idea from experimental body armors (which you might of heard of http://science.howstuffworks.com/liquid-body-armor.htm )

If that could work, I would think the added flexibility would be good.

Not a physics person though, so no clue.

Anonymous: that is an interesting idea. The problem I see with it is that there would have to be very clear advantages in having a dual 'supple + stiff' system. The advantages of stiff skeletal components seem obvious, but what are the advantages of having them turn supple later on?