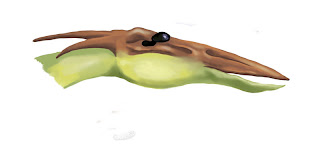 Click to enlarge; copyright Gert van Dijk
I hardly ever post two days in a row, but this post hasn't got anything new to say about speculative biology, so it does not really count in that respect. It is about the blog itself, which has reached its second birthday. I wished to commemorate it by drawing attention to the fact that several Furaha images accompany an article by Lewis Dartnell (Hi Lewis!) on alien life in the Australian Magazine Cosmos, but my copy hasn't arrived yet. If you are down there, get #32!

Writing a blog is addictive, and I if I did not keep a check on it I would hardly have time to spend on the Furaha project. So where does that stand?

As far as programming maps and texturing planets is concerned, that part is finished, except for designing rivers and lakes that realistically follow terrain contours. But those will be hardly visible anyway, and so have little priority. I have lay-out templates in InDesign so I can show publishers what the book might look like. The one thing that needs attention is paintings. I do not think I need more full ones with background scenery, but rather the kind you would see in a field guide or an encyclopedia. There should be images of hexapod evolutionary descent, of spidrid morphological variability, and of the vast range of Fishes IV, V and VI. As I am a slow painter, I decided to take up digital painting. Most people say that they take to graphics tablets in a day or so, but I am not one of them: I still have trouble linking the scren with my motor programs. While I am slowly winning the struggle with Photoshop, I have now also bought Painter on the advice of a pro (merci Sylvia), a program that feels more natural to me. The gracile neocarnivore's head at the top of this post concerns a design I had already done in oils; I did it again digitally to test the waters. It's not good enough yet, but there's progress.

Thanks to the regular readers and commenters; quite often the comments make me think of another subject for a post.

Finally, I was thinking about changing the name of the blog. When I started I thought it would mostly be about Furaha with some other items thrown in, but that is not what happened; in fact, it is the other way around. Perhaps it should be 'Speculative Biology and Furahan Affairs'; any suggestions?
Posted by Sigmund Nastrazzurro at 13:49

Let me be the first to congratulate you with this memorable two years of blogging.

Nice hexapod neocarnivore head too. It looks almost like a weird cross between a stork and a mantis shrimp. I assume that the similarities between this species, the "beater" that headlines the blog title, and the neocarnivore that you have as your icon indicate these all belong to the same family?

Anonymous: they are definitely fairly closely related, but whether they should be part of the same family? Ten years ago I would probably have said yes, but I am uncertain; the thing is, with modern cladistics I no longer have any idea whether or not the Linnaean system of species, genus, familia, ordo etc. is still valid.

Congratulations Gert! I've been reading your blog for a long time now, and I really admire the effort you've been putting into Furaha. Keep up the good work, and I can't wait to buy your book when it eventually comes out!

I like the title of your blog as-is, for Furaha really does concern me more than allied matters. :)