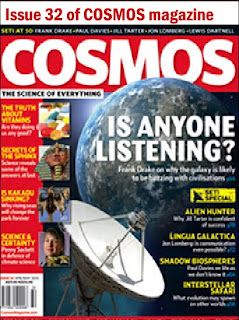 Click to enlarge; copyright Cosmos magazine
The planet Furaha occurs in a recent article in the Australian Magazine 'Cosmos'. Seeing how mammals in Australia seem a bit otherwordly, that seems fitting in a way. The issue in question, #32, is devoted to SETI. The Search for ExtraTerrestrial Intelligence has been going on for 50 years now. The word 'intelligence' in SETI always makes me wonder how intelligence should be defined in this context, and I will digress a bit about that subject at the end of this post.

But first, back to the article in question: 'Alien Safari'. It deals with the ways in which matters such as photosynthesis and biomechanics shape animal and plant evolution. It was written by Lewis Dartnell, a British astrobiologist. Long-term readers may remember that Lewis used some Furahan images to help illustrate a talk he gave at the Cheltenham Science Fair in the UK last year. 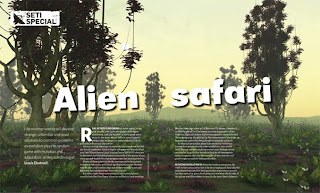 Click to enlarge; current copyright: Cosmos magazine
What you see here is the double spread page starting the article. Yes, that is a Furahan forest, with a greenish hue (that's artistic license). In fact, it is almost the same forest that you saw a few weeks ago in the screensaver post. I am not willing to give away much about the article, as the issue of Cosmos is still for sale, and you should of course all buy it! But I can tell you that there are more Furahan pictures in there, and also that Lewis was kind enough to draw attention to the Furaha website and to yours truly. The 'gracile' neocarnivore that occurs on the 'land' page of the site, and whose head I use for my icon, is there as well. Lewis uses it in the context of hexapod animals to explain the principle of 'centaurism', i.e., the freeing of front limbs for tasks other than a locomotor one. I wonder if this will help spread the use of this word. After coining it, I found out that it seems to be in use in some languages to denote horsemanship, as far as I can tell. 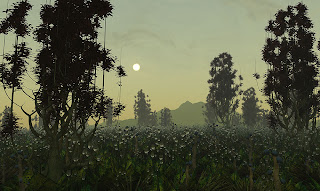 Click to enlarge; copyright Gert van Dijk
Simply because I could not resist here is another version of that forest, with a somewhat other vegetation. The original is one of the largest renderings I ever did, at 4600 pixels wide. By the way, please do not think that I was the only one contributing illustrations to the article. One illustrator is well known among those who like speculative alien animals, and that is Alex Ries, who contributed his superb 'Shadow of the Sun' painting to the article (and who featured on this blog). Here it is on his own web site.

So, if you all order issue #32 of Cosmos Magazine right now, the editor might ask for more such articles as well as more of my paintings.

Meanwhile, have I got anything against intelligence? Absolutely not; it is just that I wonder how smart a species has to be before it can be counted as intelligent. The most important doubt I have is whether 'smartness' should only focus on the ability to recognise, formulate and understand problems, which seems to be the dictionary approach. I do not care much whether the problems in question concern climate change or more complex questions such as life, the universe and everything. A rather different take would be to reserve 'intelligence' for the additional ability to act on and solve such problems. That might be asking for a lot though, and biological evolution is not a good mechanism to emphasize long-term goals over short-term ones. We have no idea whether or not other sapient species are wiser than we are; apparently Stephen Hawking recently warned that contact with intelligent aliens might harm us, based upon the notion that they might be like us!

Well, there certainly is no intelligent life on Furaha; there was a species once that showed evidence of sapience. However, this species, a predator, went extinct as suitable prey died out on its island habitat; no big mystery as to how that happened...

The main reason for not keeping that species was not cynicism, but simply that I am more interested in biological principles than in sophonts. There is enough to astound and thrill in biology, or in other sciences for that matter. Magazines like Cosmos help popularise science, something I find extremely important. But waxing philosophical means it is time to return to Earth (well, sort of). I just found out that Hawking made his remarks in a Discovery Channel programme that promises some alien animals. I will try to find them, as I am curious how well they follow the sort of evolutionary principles that Lewis discussed in his article, and that I try to explain in this blog. If I find any interesting ones, I will drag them back here and probe them; after all, that is what sophonts seem to like to do to animals from worlds not their own.
Posted by Sigmund Nastrazzurro at 21:36

I was informed that, as far as SETI is concerned, humankind could only be considered "intelligent" for the last 50 years or so...