Last March I asked whether anyone knew of any more sites showcasing speculative biology (here and here), and received a number of replies. Among them were Pavel Volkov who provided a list, and Josh who later alerted me to the Morae River project. What surprised me a bit was that the somewhat narrow geographical range of these projects. Most are American or British, with just a few others thrown in. Pavel is Russian, I am Dutch, but where are the others? Linguistic barriers might be to blame, but I have searched in some languages besides English, and hadn't found much. It may have to do with science fiction being less accepted in some cultures than others, or perhaps there are other explanations. The ability not to take yourself overly serious might be a prerequisite to spend vast amounts of time on an intellectual fantasy. I'm open to suggestions.

At any rate, I was puzzled by the absence of one country in particular: Japan. I know we did find one or two links to Japanese sites the last time, but there does not seem to be anything on a large scale. Dougal Dixon's book and projects like 'The Future is Wild' seem to go down well there; the thriving manga and anime culture also suggests that nothing stands in the way of a nice speculative biology project.

By the way, out of curiosity I just ordered a secondhand manga (comic) version of 'The Future is Wild'. Not that I can read Japanese, but I do not expect a comic about animals to be heavy on text. I will show bits of it here in due time, unless I find it too disappointing.

Back to the issue at hand. Luckily, there is a Japanese version of Amazon. It is partly in English, but with Google's translation services even the Japanese version makes some sense. I started by typing in 'Dougal Dixon', and then clicked the part of the page where it normally says something like 'here are similar books you might like'. If you do so, you will encounter books on 'The Future is Wild' as well as the Rhinogradentia. I found three books that looked intriguing. Their titles seem to have 'kimono' in them, but the illustrations on their covers suggest something altogether different. 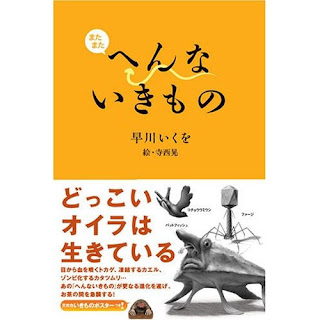 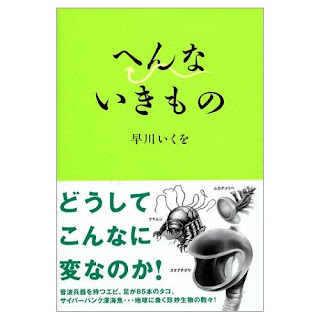 Click to enlarge
Here they are. Have a look at the animal on the cover with the yellow design. We see a fish with a rather human-looking face, and will let that one pass. But behind it is what must be a flying snail. There isn't much I can tell about the others (one's a virus). Apparently these two books were published several years ago. 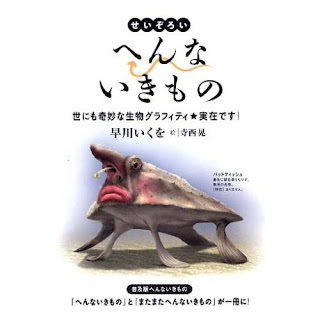 Click to enlarge
This one, I gather, bundles the other two. It's the fish again. So what are the books about? Somehow the fact that here is a text I cannot begin to understand adds an alien touch that rather fits the subject. Anyway, there were customer reviews, and here is what Google's translator program made of one of them:

This book is "Kimono not Enough" "Enough and footwear also not" is omitted the bound volumes and some from column. (→ did not have these books the reader (me) this is advantageous to) a real strange creatures and 130 species Journal. Facing two strange creatures are a kind of introduction page. (Real-page black and white illustrations on the right (+ Omake occasionally) witty comments and a short description page on the left) you can pick up to read from anywhere. Look at the illustrations feel Idaki Kosobagayui (→ ...), but dreams do come to read the comments or grin, or wonder. It's not boring the reader is this. While reading "What appeared Kettai biological ecosystems do it?』 Or 『evolutionary theory to explain it I wonder?" It makes the question of nature and inspire. This year (2009) The 200 birth anniversary of Darwin's Origin of Species marks the 150 anniversary of publication, this book is suitable for one year I Memorial is such a book (laughs). This book is a serious book of biology, despite not promote reading as "a serious and』 or 『Let's theory of evolution-related reading a book" that "curiosity" and consequently Yo clock has a clock."

Right. Too bad Star Treks's universal translator is not quite ready yet. Still, most can be understood, and this indeed seems to be a work on speculative biology. The reviewer thinks it is serious biology, meaning he is probably like me or you. Some other sentences baffle me; 'Yo clock has a clock' sounds good though.

I know that this blog is occasionally read by people in Japan, so I am asking those readers for help! Are these books really about speculative biology? Are they good? Let us know!
Posted by Sigmund Nastrazzurro at 15:39

This book's title is "Strange Creatures ".

These animal are real. Not speculative biology.

Really? In that case I made a rather funny mistake!

I had thought that some creatures were a bit too 'ordinary'. That held for the fish as well as for the and the eight-legged animal. It resembles a tardigrade, but I never thought it was one, with what seems like a sort of armoured shell. I thought they were soft and blobby. That still leaves two creatures on the green book that I do not recognise.

Sorry. I am not good at English.

Thanks for the help, Puyamaster. I like the irony of this situation.

Have a look at the comments to the previous post (Sulfuria) as well.

Fish is a member of Ogcocephalidae family of Lophiiformes (Anglerfishes) order.
Here is a plate from Russian edition of "Life of animals" (vol. 4 "Fishes"). Look at fig. 5 at the picture.
It is an unique species of fishes almost unable to swim.
----
Thanks for the mention of my project. NO! Not "my", but "our", because many people share and discuss their ideas.

Thanks for the images!