Anatomy of an Alien V / Greenworld I

This is the fifth and final post on the 1997 BBC documentary 'Anatomy of an Alien / Natural History of an Alien. Just like the previous instalment, this one deals with the work of Dougal Dixon. Although I did not plan it this way, keeping this one for last turns out nicely, as yesterday (January 29) Dixon's brand new book on Greenworld was published in Japan. More on that subject later, which explains why this post is also called 'Greenworld I'. Meanwhile, don't go rushing to your local book store to buy the English, French or whatever versions, as there aren't any. You Japanese readers, please do rush out now and buy ten copies each, so the publisher may give the rest of us an English version.

The video fragment is shown below. It does a good job of showing the evolutionary origins of the two major animal groups on Greenworld. Their common ancestor was a starfish-like animal with radial symmetry, but, unlike Earth's starfish, it had six legs, not five. When these animals came out on land they had not yet developed beyond radial symmetry, and still had no hard skeleton. Their solution was to use massive clumsy muscles first, but they developed a more practical skeleton later. In effect, their legs more or less started out as tentacles but developed into proper legs, much as I explained in my series on 'Why there is no walking with tentacles'. These animals secondarily developed bilateral symmetry. In one group the plane of symmetry came to lie in the groove (sulcus) between the legs, so the animals ended up with three pairs of legs; these are sulcosyms. In the other lineage the symmetry plane neatly divides an arm ('brachium') on one end of the animal and another at its other end. These are the 'brachiosyms', which therefore have two unpaired legs, one at the front and one at the end, as well as two pairs of legs in between. Those who have already watched the video at the end of this post may have noticed that not everything I have written here is mentioned in the video, so how do I know this? Well, Dougal Dixon sent me some notes and sketches on Greenworld a long time ago, and that's how. Mind you, the names might have changed since then, because this was 20 years ago...

If you search the internet you will find bits and pieces of Greenworld here and there, probably because the book has had to wait such a long time before it was published. Puyamaster from Japan, whose comments you can find following the two posts before the present one, searched more diligently than most and came up with some interesting material. Here are some of the things he found (with thanks!). 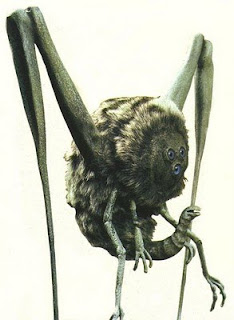 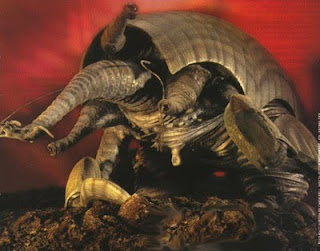 Source unknown
So there are (or were) models of some Greenworld animals. One is an 'anteater-sized insectivore (or equivalent)'. It is also visible in the video. My notes say it is the biggest of the brachiosyms. 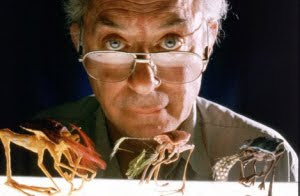 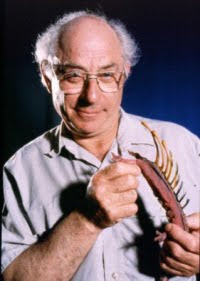 Source unknown
Aha! Jack Cohen, also featuring in 'Natural History of an Alien' (and featuring in previous segments, such as the one on 'Europan waters', is shown holding some Greenworld models. When it comes to biologically sound aliens Jack Cohen is undoubtedly one of the usual suspects to round up, so his appearance here is not surprising. Still , I wonder what the occasion was. Puyamaster provided the web addresses of these photographs; their original sites are here and here. I would be curious to have a look at the site they are meant to illustrate; usually this is a simple matter of successively cutting off the end of the address until you find a readable htm file, but that does not help here. If anyone does know where these picture are from, I, and presumably others too, would be interested.

In a next post I will write a bit more about Greenworld. Here I would like to finish with some thoughts on the alien nature of radial symmetry. I guess that many of those designing alien animals consciously search for features to strengthen the 'alienness' fof their creatures, and radial symmetry has that in abundance. In discussions on the subject some seem to accept it as an acceptable body plan for big and possibly intelligent animals, whereas others dismiss it. Quite often the lack of any such animals on Earth is used as an argument. Indeed, we do not have hog-sized starfish digging up the flower beds in our gardens, and personally I deplore the absence of elephantine centipedes. But before dismissing them it may pay to try to specify the reasons why there are no such animals. A first and simple reason why there are no big starfish walking around on Earth is evolutionary competition; their seat is already taken!

Another, and possible more important reason may be sought in a respiratory system. Some arthropods have tubes entering the body supplying each cell of the body with air for gas exchange. Beyond a certain size passive gas exchange in this way is simply unsuitable, so that limits growth. Our own respiratory system does of course allow large body size, possibly exactly because it does not attempt to reach every cell; instead, that task is relegated to the circulation. Altering an unsuitable respiratory system may need going back to the drawing board to start all over again, but evolution does not do that. It either adapts another organ, or tinkers with what there is instead.

Having an exoskeleton is another difficulty: for the same strength you need more material than for an endoskeleton, and growth is a major design problem. But this particular problem does lend itself to gradual change: if you simply strengthen one side of an exoskeletal tube and weaken the other side, you keep the weight-bearing function intact while sparing weight. Repeat this a few times, and you have a weight-bearing strut that does not envelop the limb. This is evolutionary tinkering, and this is how Furahan hexapods developed a practical skeleton. This also explains why dermal armour crops up so easily in hexapods; their skin, a secondary development, can easily revert to armour production. Luckily for them, protohexapods already had a nice pumping system in place pumping blood as well as air, so they did not have to solve too many problems at one. If Earth's arthropods had has another respiratory system, who knows what might have happened?

In the end, of course, all this remains speculation. And as we all read the same books and are subjected to the same sources, we come up with the same alien designs. I've called it 'speculatory convergence' or 'convergent speculation', a concept related rather closely to convergent evolution. Dougal developed secondary bilateral symmetry for brachiosyms as well as sulcosyms. I developed secondary bilateralism as well, but only for some predatory neospidrids. You will find an example here. Spidrids, of course, are radially symmetrical, but these neospidrids have a symmetry plane going through one leg, just like the brachiosyms. Convergent speculation...

Posted by Sigmund Nastrazzurro at 13:11

As far as 'alienness' goes, I particularly like the idea of bilateral symmetry being a later evolutionary trait. It allows for some unusual directions for body shape to go (illustrated by the Greenworld creatures). It also seems that creatures seem to be more 'alien' if they exhibit features of aquatic life even though they're on land. I'm not sure just how cliche that may be at this point, but when we thing of the most 'alien' terrestrial life, the creatures of the deep are at the top of the list.

"...A first and simple reason why there are no big starfish walking around on Earth is evolutionary competition; their seat is already taken!

Another, and possible more important reason may be sought in a respiratory system. Some arthropods have tubes entering the body supplying each cell of the body with air for gas exchange."

I think your mind must have raced ahead of your fingers here. You start to explain why radial symmetry seems weird to us, and then suddenly you are explaining why arthropods don't get big on earth. Surely you intended to write some transition between those paragraphs?


As for the "alien-ness" of radial symmetry, i agree that bauplan does tend to seem pretty weird to our human sensibilities. But not much of that alien-ness applies to these greenworld creatures, (at least in the pictures, the video is currently not working). It's one thing to say that these creatures originated from radial ancestors, but as they are shown, i would categorize them squarely as "bilateral".

about creatures of the deep: I agree that they seem to escape from the standard mold more easily than animals living in other surroundings. I wonder why...

J.W.: I agree that there is a bit of a jump there. In my work I edit texts three or four times, but I simply do not have the time to polish blog texts to a similar degree.
You are right that the greenworld beings look almost completely bilateral, but I think they are intended to llok that way. The further developed these creatures are, the less recognisable their original radial plan may become. Is a mammal's 'inner fish' still recognisable?

I bought and read ‘Greenworld’. Very wonderful!
There are many illustrations in this book, but no images of the models...

The name of creatures in your pictures are Spitter, Kwank, Dufflepuds, and Curlywurl. (from top to bottom)...

Hmmm... sorry for commenting after several months, but I was casually looking at those pictures Puyamaster found, and trying to find out where they were from, I started trimming the filename and... well, see for yourself what happens if you trim everything past "s400" from the filename:
http://2.bp.blogspot.com/_vLbMuPkqGIw/R9AdS3fgpxI/AAAAAAAABgY/xnY6akyFqw8/s400

Still wondering where they originally were from, though.

What I get is the same image but a bit bigger; no text, nothing else...

I'd say a little more than just a bit bigger... they are the original size, and appear to have been scanned from some article. One of them has some text partially visible on the right margin... something like "ALIEN PHOTOGRAPHY BY CHRIS BELL" and something else...

Interesting ideas. It certainly is an interesting alternative to the "bilateral only" ideas about alien life.

Does anyone know what the giant creature that appears behind the kwank is? I've wondered this for almost 14 years now!

Hullo, judging from a quick look at the comments it looks like the search for the original home of these images is still on. So I did a quick google reverse image search and found this: stevyncolgan.blogspot.com/2008/03/life-as-we-dont-know-it.html Also ran into this: http://drxbkt1pbsu0u.cloudfront.net/D/C/C/A/0/28D89CDC058005AF1532245AB69.jpg Google seems to associate that image with a newspaper's site, tho the picture is now missing from that site; maybe this was a photo shoot for a newspaper?

Daniel: as for the Cogan post, he states at the bottom in small print: "Other images from various sources unknown (possibly models developed by Jack Cohen and/or Dougal Dixon)."

I love the other one. You are probably right: there was probably a newspaper article. Nice models by the way; I wonder what happened to them...