Anatomy of an alien IV: Sulfuria

Writing this a new post took a bit more time than usual, for which there are two reasons. The first is that quite often I simply run out of time. In fact, I have found that putting up a post almost every week (I did 50 in 2009) is about enough to stop me working on new content for the Furaha site. For that reason alone I may decide to slow down a bit.

The second reason is that I had lots of problems in trying to upload videos. The main reason was that I tried to do it with software I was unfamiliar with (Adobe Premiere Elements). I could make great titles with it, but the resulting file was about 850 Mb, whereas comparable earlier ones were less than 20 Mb. In the end I went back to the previous painful process involving three different programs and convoluted steps. There are too many video formats, and if you are not an expert life is hard.

Anyway, in the end I managed to upload a file. Today's post is once more about the BBC documentary 'Natural history of an alien', also known as 'Anatomy of an alien'. I rather prefer the first title. After that there will be only one fragment left to post on this blog, but this does not mean that the entire program will then have been posted here. Some parts deal with life on early Earth or on general biology, and I thought these would not be of major importance to the readership of this blog.

Both remaining sections feature the work of Dougal Dixon, someone who probably needs no introduction in the world of speculative biology. For those who do not know his work, he wrote several landmark books in the field, of which I like "After Man, a zoology of the future", and "The New Dinosaurs the best". In those years he and I communicated a few times by regular mail (yes, it was that long ago). 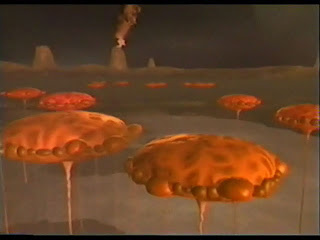 Click to enlarge; copyright BBC 1997
The present post is about the world 'Sulfuria', equiped with a very dense atmosphere. As discussed before, heavy atmospheres lend themselves well to flight, both of the 'heavier'and of the 'lighter-than-air' varieties. One of Sulfuria's major lifeforms is a 'ballont'; for previous discussions, see here, here and here. It is not a free floating one though, but a stalked one. The story is that these beings stick out above the clouds, where they are in the sun. Presumably sunlight is beneficial to them in the sense that it drives their biochemistry, but like many details in this programme the rationale for this is not spelled out.

The ballonts are rather nice, I think, but then again I have always been partials to ballonts. One small problem is that it is very difficult to get a sense of scale, if there is nothing in the image to compare the ballonts with. It would have been nice to learn a bit more about this biotope: there may be more flying forms, and some might be involved in the life cycle or ecology of he giant ballonts. I guess we will have to make these up ourselves.

The last fragment in this series will be posted in the near future, and will also deal with Dixon's work. In it, he discusses another invented world, called "Greenworld". I think I still have photocopies of sketches of Greenworld creatures he sent me years ago. Unfortunately, the work did not then see the light as a book, but I read recently that Greenworld is in fact about to be published, in Japanese. I will keep my eyes open for that one; not that I read Japanese, but I hope there will be pictures...

Posted by Sigmund Nastrazzurro at 21:41

Email ThisBlogThis!Share to TwitterShare to FacebookShare to Pinterest
Labels: anatomy of an alien, ballonts, Dougal Dixon

Just wait until you see his Greenworld animals, which will be published in Japan. Basically they have radial symmetry with two major evolutionary lines, both of which have secondary bilateral symmetry: one with an axis running through the limbs, one with an axis running between limbs.
At least that was the scheme he wrote about 20 years ago (I just found my correspondence with him back again). That's stamina!

Now, Furaha is about as old, so perhaps that to will find a publisher. perhaps I should look towards Japan as well...

Wow! Where do these come from!? Are they from the book?

Can you tell us more about them? Do not worry about your English; it is infinitely better than my Japanese. If you think you cannot manage, perhaps you could write simple sentences in Japanese and let Google do the translation.

I was planning to write one or two posts on Greenworld, and these images would be nice additions. But who made them, and are there more?

Sorry,I don't know about these images.

however, I am looking for about the greenworld for years.

You found one more than I did, and that is the one in which we see Jack Cohen with two models. They are the same animals in the images you sent, so I suppose the photographs are of these models.

So I guess that my photocopies of some of Dougal's sketches dating back to the eighties are quite rare. I do not think I could publish them without his permission, and I no longer have a working email address...

Oh! I want to see a sketches of him.

I have a few images of Cohen with other models, but I don't know how to send pictures to you...

I am trying to contact Dixon, so you will have to wait...

As for sending me pictures, you can send them to: nastrazzurro@gmail.com
Thanks in advance.

By the way, do you know of any good works on speculative biology in Japan, or are there no such works?

Dixon's work is amazing, I didn't think that even a mind like his could have come up with theas creatures. although looking at life after man, i should have guessed.