Some of Mike Bruinsma's animals

Lately I have given biomechanics much attention, perhaps at the expense of displaying alien animals. Much as I like a good drawing or rendering of a well-designed animal, my interest increases the more attention is given to a biological background. There aren't that many proper worldbuilders out there. Some I could discuss, but, like Wayne Barlowe, are already very well-known (and there are already enough discussions about matters such as the hard-to-believe absence of sight and his odd predilection for elephantine feet).

And now for something rather different. I found the website of Mike Bruinsma rummaging though other sites' links. His site informs me that he is a professional designer and illustrator. Luckily, his interests include 'Character / Creature design', under which heading you will find the following images, and more besides. I have no idea whether there these animals have a common background story or whether they all stand on their own. 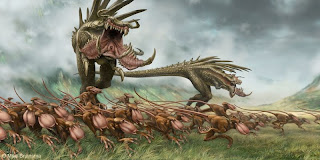 Click to enlarge (© Mike Bruinsma)
I like this hunting scene. There might be some common parentage between the hunters and the hunted in view of their jaw design. Then again, the large hunters appear to be bipedal with a basic tetrapod design, whereas the small creatures in fact seem to be running on three legs, as far as I can make out their anatomy. It seems like they have one strong hind leg and two more slender front ones. The front ones move in unison. Well, well, I should have incorporated these when I discussed tripedal walking designs in a previous post. 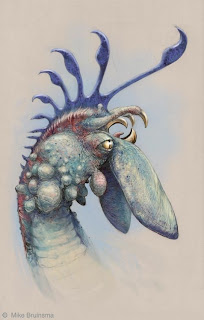 A head... Clearly, Mr Bruinsma has a sense of humour and is not afraid to show it. Too many people take speculative biology too seriously, and then it quickly becomes boring. The whole field is an intellectual exercise, nothing more. Like science fiction it should be entertaining (OK, as well as thought-provoking). 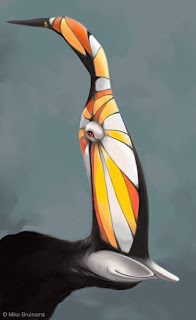 Another head. Now this one immediately makes you wonder what the gaudy colours are for. Sexual selection immediately comes to mind. Many things in Earth biology that do not make sense from a simple and austere view of 'fitness' turn out to have to do something with sex, and why should the rest of the universe by any different. I wonder what the other sex(es) look like? 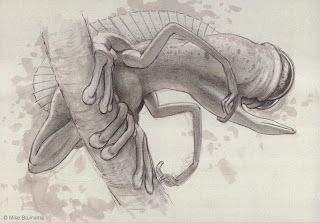 I will end with this one, because it is my favourite, not because there aren't any more. There are! It is a bit difficult to say why I like it so much. Is it because of the relative calm of its position or the calm composition? Its well-designed body position? By the way, I suppose everyone immediately saw that we are dealing with a pentapod here: there is one big leg at the aft end of the body and two pairs of legs very close together at the front. One pair of these legs hold the body in position by grasping the branch, while the other pair is held in the air. Are these dextrous manipulators? Is this another example of centaurism? It seems so. I guess I do know why I like this one so much: it's biologically interesting and artistically very pleasing. The only thing missing is more of the same!
Posted by Sigmund Nastrazzurro at 14:16

I noticed people coming back to this specific page. If one of you is Mike Bruinsma, I did try to get in touch before posting, but failed. If you wish to contact me, please leave a message