While many people draw or paint an odd animal every once in a while, there aren't that many who go so far as to design biotopes or ecologies to go with them. And let's face it, not everyone is fortunate enough to have the skills to turn their ideas into attractive and biologically convincing depictions of fictional animals. It is therefore not that surprising that the number of 'grand scale' speculative biology projects is rather small. Most regular readers of this blog will probably be able to rattle off a short list of such projects, and my call for new ones some time ago added some, but not many (I still need to update the links page on the Furaha site, by the way).

So imagine my surprise and delight when Josh, a regular commenter, alerted me to a new project: the Morae River by Brynn Metheney. Browsing through the Morae River website revealed that the site came into being about half a year ago, so it is fairly new. What is it about? Well, one of the first pages shows a map of a large geographical region around the river Morae. The area covered is 300,000 square miles. After conversion to a more sensible length measure this conforms to an area of about 770,000 square kilometers. The closest match for countries I could find was Turkey. That is a big playing ground. This shouldn't pose too many limitations to the designer's creativity, as there are mountains, plains, hills, swamps, an estuary and a sea. I did not immediately spot a desert though, but there might be one. The site discusses animals, plants and biotopes. Let me show a few examples. There are more on her site, so be certain to visit it. 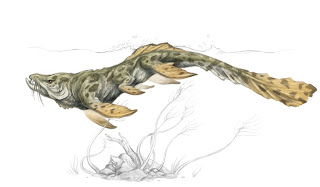 Click to enlarge © Brynn Metheney
The first animal I will show here is a recent addition to the site: the 'Sabulo'. It is described as a fish. Take a good look: that does not look like a contemporary Earth fish, does it? Its body plan is neither that of a teleost fish nor that of a cartilaginous fish. And it also doesn't look like any of the various extinct classes of 'fish' on Earth. I see no gill slits and no clear gill covers, and there are three pairs of paired fins, looking suspiciously like redesigned legs. Are we not on Earth? By the way, I have no objections at all to using the word 'fish' in a loose sense. On Furaha there are six classes of 'Fish', all of which have proper names such as 'Clavifluitati', which probably explains why they are usually labelled 'Fishes I' to 'Fishes VI' instead. The English language is biologically extraordinarily careless with the word 'fish' anyway: apart from animals such as salmon, there are crayfish, cuttlefish, starfish and shellfish. This motley collection makes you think that the word 'fish' originally may only have meant 'edible water animal'. 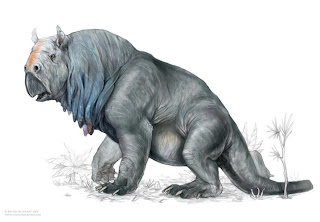 Click to enlarge © Brynn Metheney
Here's another fine drawing: a blue-throated hulompolus. I love the contrast between the gaudy dewlaps and the otherwise relatively boring dull gray exterior. The 'BTH' is a reptile according to the text; it lays eggs, but a reptile with external ears? Its hearing is said to be good, so it having ears is no mistake. Obviously, we are not in Kansas anymore. So where actually is the river Morae? Is this alternate evolution on Earth, or are we somewhere else entirely? 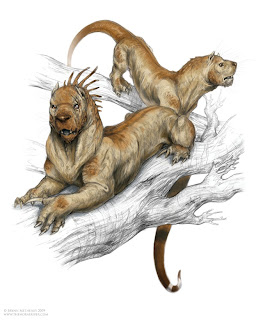 Click to enlarge © Brynn Metheney
A quick glance at the two animals shown here betrays how they get their calorie intake: these animals kill for a living. They are red-tailed mardiks. The scars on the nearest animal, with its one blinded eye, are a brilliant idea. I think that this is the first time that I have ever seen a recognisable individual of an imaginary species instead of just the general one. I wouldn't be surprised if people pick up on this notion and start adding things such as nicks to ears and broken teeth to their creations from now on. The mardik looks like a mammal and might be one; the spines and the apparent bony scutes on its neck could be explained away while still keeping it an Earth mammal, but then again, it might just be called a 'mammal' as shorthand for its general form. An other word might be used, such as 'mammaloid', but that sounds pretty horrible. 'Mammalian' could do; I once came up with 'mammalien' as a pun to use for a similar purpose. Anyway, none of this solves the riddle of where and when to situate the river Morae any smaller; quite the contrary.

The author prefers to keep us in the dark regarding how all of this fits together. I do not think this makes a big difference. After all, one of the tricks of a good science fiction novel is that it should leave you wanting to know more about the world you've just read about. Speculative biology is no different. A certain way to spoil that thirst for more is to write lengthy essays explaining absolutely everything about how a particular world works. That gets boring quickly. The river Morae doesn't do that at all. In fact, it is at the opposite point where I think I haven't seen enough, so I want more! Luckily, there are remarks in the text suggesting that there more is to come. Good! You can already order a book, published by using one of these novel 'lay out your own book and we print it' firms. It looks attractive, and I will certainly order one, right after posting this blog entry.
Posted by Sigmund Nastrazzurro at 12:04

Did you just look at the pictures? Understandable if so.

* In one of the comments the author said that he's leaving it an open question weather this is an alternate earth or some other planet.

* Also the descriptions (as i understand it) are written from the perspective of a first time observer. This observer uses the familiar classification system as best he can to describe what he sees, with the understanding that these creatures don't exactly fit our categories.


Also:
"And it also looks like any of the various extinct classes of 'fish' on Earth."

I think you forgot a "doesn't" or some such negative word in the above sentence.

"biotopes or ecologies to go with them."

A bit more than you'd think, but still, not many. Its more along the lines of "people have these ideas but don't publish them in any format due to no way of putting work on internet/fear of online haters/etc.

"This motley collection makes you think that the word 'fish' originally may only have meant 'edible water animal'."

I think it did. Not sure, but it wouldn't be surprising, given that 'shark' and 'whale' come from the same roots in English.

"I wouldn't be surprised if people pick up on this notion and start adding things such as nicks to ears and broken teeth to their creations from now on."

Chimpeetah from DeviantArt did this with a terrestrial arthropod (a scorpion cousin), showing a geriatric individual of the species as opposed to a young, healthy one.

"And it also [doesn't] look like any of the various extinct classes of 'fish' on Earth."

Actually, it looks a lot like a Tiktaalik who adapted into a Well's Catfish-like niche...

"but a reptile with external ears?"

My gut tells me its a synapsid. Or something along those lines. Hey, maybe the Morae River is some alternate history where the Permian extinction never happened and things got really weird on Earth (which would explain all the giant bugs, strange sarcopterygian-like fish, and creatures that look like reptile-mammal crossbreeds). Or not.

Either way, its still a fascinating project. I'm smacking my head against the wall because I came up with a similar idea after reading a science fiction novel set in the future on a long stretch of river (no, not Riverworld), and was thinking of a future or alternate world set in a similar, Mississippi or Amazon-like location. But I guess this author beat me to it. Kudos to the author, keep up the great work!

Don't worry, I read before writing. However, I can see how you might have gotten the impression that I had not read the author's work. I did know that she chose the classifications on purpose, and in fact we corresponded a bit about that theme. So I knew that there was no ready answer to where and when all this takes place. What I wrote was simply my take on what I could deduct from the images themselves.

You were right about the missing word; it's been corrected; thanks.

About there being more people who do such work: you are probably quite right in that there more projects out there that are kept hidden. Perhaps they should not remain so...

I see that you too cannot resist speculating on the where and when of the Morae river life forms. Fascinating, aren't they? But a Tiktaalik with six legs?

"Fascinating, aren't they? But a Tiktaalik with six legs?"

Obviously it has been a long time since this world diverged from our own (if the alt-Paleozoic hypothesis is used). Long enough for arthropods to develop some sort of internal respiratory tract to get around the square-cube rule problems that they already have with their spiracle, for example. Why not a clade of sarcopterygians who developed a third pair of limbs.

"About there being more people who do such work: you are probably quite right in that there more projects out there that are kept hidden. Perhaps they should not remain so..."

I have a bunch of my own worlds, but I keep them hidden myself. So one could say I speak from experience...