Gerolf Steiner, the creator of the Rhinogradentia, died on August 14, at the age of 101. I found out by accident, as I wondered whether there was any news about him. Just a mention of his death, without any obituaries. Perhaps these will follow later, opr perhaps they are not on the internet. If none of this means anything perhaps you should replace 'Rhinogradentia' with 'snouters' and 'Gerolf Steiner' with 'Harald Stümpke'. I wrote about him and his creatures three times: first, second and third blog entries. Gerolf Steiner was one of the first, probably the very first, to publish a book on made-up animals that was well-based in biology. That is in act debatable, as I do not think anyone would really believe it likely that mammals with fully-functional legs would ever start walking on their noses. But his work on the Rhinogradentia is clear not meant to be taken that seriously, and doing so would ruin it - an attitude Steiner himself probably smiled at, given the way he portrays similar overly 'correct' attitudes in his book ''Stümpe's Rhinogradentia - Versuch einer Analyse'. That book, purportedly written by one Karl D.S. Geeste, but in reality by Steiner himself, contains ssome interesting insights in his life and times. In this last blog entry on the Rhinogradentia I decided not to show one of the Rhinogradentia, as they can, I think, all be found on the internet somewhere (the book is however still available and I recommend it). Instead, there are some comments on what we could not call 'speculative evolution', or 'speculative biology', or whatever name you prefer. First, Steiner writes that the habit of designing animals for fun is a much more common childish trait ('Kinderei') as is commonly admitted. He himself started doing so at a very early age. He writes that his first creatures were biologically implausible, and he provides an example of his work done in 1922, when he was about 14. 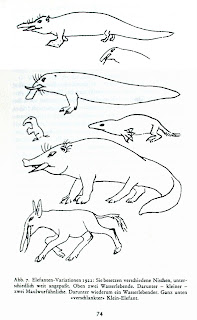 Click to enlarge Copyright Gutav Fischer Verlag Stuttgart
These animals are labelled 'elephant variations'. The comment for the animal at the bottom reads that it is a slimmed-down small elephant. Its no longer columnar legs show that Steiner has a good feeling for biomechanics. A few years later, at the end of the 1920s, he produced a group af animals entitled 'Balhörner'. Here they are (my scanner just gave up, so the quality is not too good -sorry-). 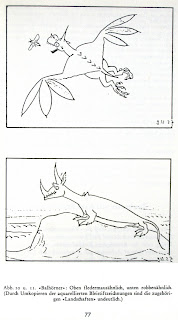 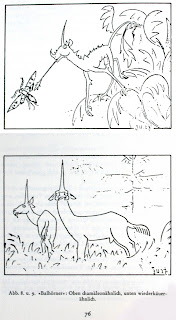 Click to enlarge Copyright Gutav Fischer Verlag Stuttgart
Steiner describes then as partly mammalian, partly reptilian, but does not consider them very good, as 'he was after all only a very young student'. Well, that particular young student lived to 101 years of age. I will close with a translated version of an interesting sentence, in the section where he describes that his own early inventions were still scientifically impossible (I followed the German structure of the sentence). "Later believable forms were produced; resembling fantasy animals in part, these have been published recently -a long time after the first publication of the Rhinogradentia- in England in 1981 (D.Dixon, After Man), creatures evolved from real lifeforms according to the rules of evolution." That is interesting: the writer of the first well-known book on speculative biology knew of the second such work. A pity he does not write more about it: did he see resemblances with his own work? We will probably never know.
Posted by Sigmund Nastrazzurro at 13:33

Sorry if this seems a bit late, but I couldn't help but notice that the flying 'Balhörner' has a wing design which bears more than a passive resemblance to the membranous overlapping "finger fins" of the banshee and great leonopteryx from Avatar.
Another case of convergent speculation or actual inspiration of the Avatar team?

Davide: I have no idea whether that particu7lar book was ever translated into English or distributed in the US, but the chances of people in the US seeing the book seem small.
I think it is more likely that, if you take a vertebrate hand as the scaffolding for a wing, you end up either with a bat wing or with something in which each finger carries a separate winglet. It seems fairly logical, and maybe even more so than doing away with almost the entire hand skeleton, as birds did...