What I like to find during an internet search is a whole world of speculative biology, filled with interesting beings with nicely thought out backgrounds, sound biomechanical and ecological concepts, and oh yes, excellent artwork. In other words, a few years' work...

But there are quite a few creative people who design life forms for fun without all the rest of it. While a scientific background adds intellectual spice, not having one does not detract from the more primary, emotional type of fun of looking at a well-drawn animal. One example of this type of fun is the 'Diary of Inhuman Species' by Stan, who draws one species a day, as I wrote here earlier. Stan is still going strong, so do not forget to visit his site from time to time.

I came across another site with a constant stream of new odd animals, and like Stan's these animals should not be taken overly seriously. This is the 'Creature Journal' with the explanatory subtitle 'It's a journal with creatures in it'. It is written by 'Fungi' or 'misterfungi', also known as Mark A. Facey. 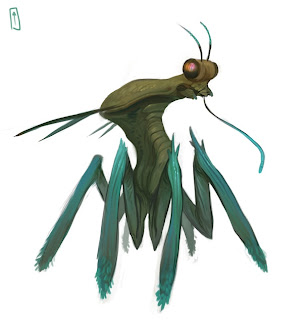 Here is one of his creatures to start with: the 'mensblodder'. You can see it shouldn't be taken too seriously, can you? I asked Mark about any systematic biological background; there doesn't seem to be an intricately worked-out one, but he was curious to hear what I made of it. I'm ready to make a remark here and there, but do not want to spoil the fun by being too intellectual about it. At first I thought this might be an animal with radial symmetry, based on the legs. Then again, the upper torso and head are clearly bilaterally symmetric, so that probably holds for the entire animal. It seems to have an internal skeleton, so it certainly is no Earth insect. Not that anyone would have thought that anyway. Seeing it's legs bent this way and that, it is either not very large or must live on a low-gravity world. Mark, is that anywhere close to what you had in mind? 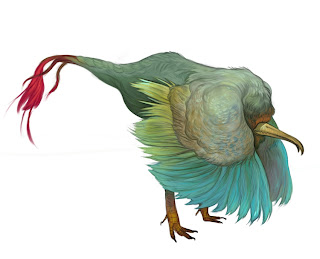 
It's a bird! It's a 'Cluckadon Tuft Puncher'. If you have seen films of birds of paradise, with their bizarre mating rituals and plumage, you can not think that this animal is wholly unearthly. Its posture reminded me of such birds, but I might be wrong: perhaps this is its normal standing posture. Then again, its name suggests a more pugilistic attitude: a threat posture? I would guess it is flightless, judging from the shape of its wings and its tail. 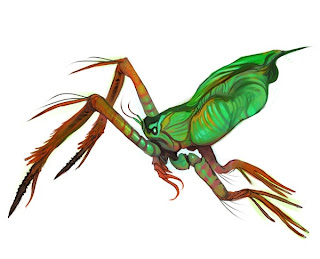 The 'emerald nitpicker' is a tetrapod animal with an exoskeleton (look at the first joints of the hind legs); and why not? There is no rule stating that any animal with more than four legs in its body plan must be an arthropod and therefore have an exoskeleton. If  larger animals can get away with walking on four legs, why shouldn't small ones be able to do the same? I can't help but wonder why its legs are in the position they're in. Are the front legs designed to catch prey? Is it a jumping predator? Regardless, it is very eye-catching.

The 'knuckleheaded guppy goblin', or, as I would label it, a fish. This certainly is a predator. I like the way its salmon-like head bump adds a sense of power to the animal. It's also nicely fleshy. It's not found in local waters, I think, as there anatomical clues why this is no mere Earth fish.

I hope you like Mark's animals as much as I do: they are fun and make me want to sit down and start painting immediately. In my case that usually involves oil paints, as I still have to make the -for me- difficult transfer to digital art. If any readers are in a similar stage, or wish to take up painting with Photoshop, Mark has posted a few videos showing how he paints a 'hulking shipwreck creeper'.

This is probably this year's last post. Then again, I might decide to post some more attempts at videos showing Furahan landscapes. Have a nice 2010!
Posted by Sigmund Nastrazzurro at 11:23

About this first animal, my guess is that it descends from radially-symmetrical ancestors, but later became bilateral as it went more mobile.

They're all interesting creatures

I'm curious why you think the fish looks non-earthly. Maybe i'm missing an important clue, but while it does look weird, i wouldn't be shocked if i learned it was a pretty faithful rendition of some type of earth fish i'd never seen before.

The head looks like it might be made out of solid bone, rather than the more complex skeletal form of normal fish heads, but that could merely be an unusual skin texture.

I was indeed thinking about the teeth, but also about the position of the pectoral and pelvic fins. But in retrospect you may be right in that fish evolution could probably encompass these features.