In the 1950s the Disney studios produced a weekly television series called Disneyland. One episode was called 'Mars and Beyond', which aired in 1957. It contains experts with heavy accents explaining things such as geosynchronous orbits to very attentive serious looking young men, but it also contains a short gem showing possible Martian life forms.

If you look at that part of the episode, reproduced below, you cannot help thinking that Disney's animators must have had a great time producing these scenes. Perhaps you have to overlook some of its now outdated aspects, such as the deeply sonorous voice. After all, this footage is over 50 years old. But if you look past that there is so much creativity that it is simply contagious. Some of the life forms in there look very far-fetched, such as the crystal ones that grow overnight and are shattered each morning. The daily cycle is a very nice and dramatic notion, but crystal life forms do not seem to have outlived the fifties and sixties in science fiction. I have always wondered in which ways a crystal would be said to be alive. Thought and even intelligence are not impossible; after all, neither neurons nor computer processors appear to do anything if you just look at them. It is simpler things such as movement that cause doubt, as well as procreation and selection. But never mind that; crystal life forms seem to belong a past concurrent with Star Trek's original series (which started in 1966, just 9 years after Mars and Beyond).

The plant that eats itself also seems impossible, because of problems with energy efficiency. Some readers might point out that one's own parts might be put to better use when the need arises, such as under extreme duress. Possibly, but there might be easier ways of recycling body parts than actually digesting such parts. 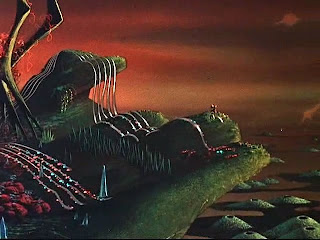 Click to enlarge; copyright Disney
I really like the scene shown above, in the beginning, in which the camera pans over a landscape, and we see rocks over which luminous threads glide along in parallel. I do not know what these are or what they are doing, but I like the air of otherworldliness of the scene. Later on, there are shelled creatures that can 'clamp up' to protect themselves from sand storms, and those seem quite likely. The animals that sieve the top layer of the soil for something are a nice concept. You could imagine a thin layer of bacteria or unicellular plants living in a few millimetres of otherwise barren ground, and this biome would definitely require specialised animals to get at this source of food. 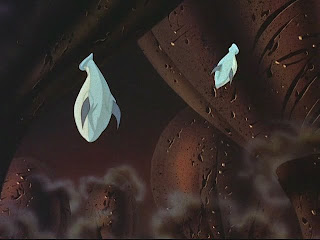 Click to enlarge; copyright Disney
My favourite, I think, is a small ballont that hangs from, well, from something. When it lets go it first inflates and then seems to fly by jet propulsion, until it is -how sad!- speared by a sessile predator. Jet propulsion with stored air, now that is a nice thought! Disney's animal looks like a simple toy balloon that is let go, but there must be ways of making it more interesting. How about storing the air under high pressure, so the amount of air will last longer? That would take a fortified bladder, the walls of which must be capable of withstanding high tensile strength. Possible. The thing is how to pump the air in. Perhaps a series of muscular 'hearts' would do, each of which would increase the pressure to compress air into chambers separated by valves? Such an animal would run out of compressed air in flight, so this mechanism might work better as an additional power source than as the sole one. Food for thought...

Email ThisBlogThis!Share to TwitterShare to FacebookShare to Pinterest
Labels: ballonts, Disney, Mars and beyond

This is really fine, I wonder how you manage to find these things :)

I liked the flying being that acts like a burning glass. The way it moves and especially the way it hunts makes it very original! And it's probably another example of silicon-based life, as the central part of its body is presumedly made of glass-like material.

I think the plant that eats itself might have been a joke, though...

You're probably right about the joke. Sometimes when you are writing, you may forget the context a bit, especially when it's about a 50 year old programme...

Glad you like my choices. Finding them is largely following leads, though (and spending too much time on doing so).

I believe i've seen a similar Disney cartoon short about extraterrestrial life in general (not mars specifically). I can't find it now.

These things are fascinating in their earnestness and very different outlook.

Hmm...how come all the featured creatures here are based on plants or invertebrates? I think a vertebrate-inspired creature can appear and still look alien.

Otherwise, it is very surreal in nature. The strange hollow plants and sessile hunters remind me a bit of Darwin IV...

Anionymous: well, keep the order in mind: Disney did this a long time before Darwin IV was conceived...