Alex Ries and the Birrin

Those on the lookout for speculative biology that catches the eye as well as the imagination could do much worse than to have a look at the work of Alex Ries. I have kept an eye on his website for several years, and had drawn the mistaken conclusion that he probably stopped working, as the site hadn't changed for quite a while. I was wrong, and should have searched in other places. It would not have taken that long to find him again on Deviant Art. (you will find more paintings on Deviant Art by typing his name in the search box). But what is more interesting than my shortcomings are his messages there that he is planning a book on his extraterrestrial creations. He is certainly not alone in wanting to do that; in fact, aspirations of producing a book are a recurrent theme among those who spend considerable time on their speculative biology creations. His remarks reveal that the book might revolve around an intelligent species, the Birrin, so perhaps that species is a good place to start looking. 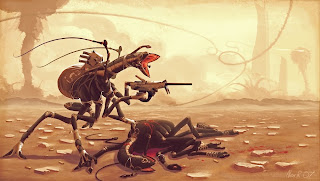 This one image speaks volumes. The first is that Mr Ries really knows his business as an artist (I wish I could paint in such a assured manner). Obviously, you can also see that it is an intelligent species (or at least it has intelligence in the toolmaking sense, and I am not certain that that is enough to qualify). Something else that struck me is what the body plan of the Birrin reveals about its planet. There is no indicator of scale, but the objects and choice of perspective suggest that the Birrin is at least one meter tall. It must live on a low-gravity world. I think so because its legs are rather spindly and stick out sideways, instead of being held vertically underneath the body. On Earth such limb positions only work for animals that are rather small, up to the size of a coconut crab, but most animals with such limb designs are smaller that that.

The reason for this is that gravity affects animals of different sizes in different ways, a subject known as scaling. It is less complex than it sounds. Suppose you make an animal twice as large in the sense that its height, width and breadth are all twice the original amount. The large one will weigh 8 times as much; that is because weight relates to mass, and mass relates to volume, and volume relates to length by a power of three. Now the cross area of its legs will be four times as much as in the original animal, because area relates to length by a power of two. The strength of legs is relates to their cross section, so what we have is an imbalance: the animal's weight has increased more than the strength of its legs. The solution? Increase the cross sectional area of the legs out of proportion. That's why elephants have thick columnar legs held under the body, and spiders have thin ones that can stick sideways. Can you have a large animal with spindly legs sticking sideways? You can, on a low gravity planet. Alternatively, the material the animal is made of are incredibly strong (how about a skeleton of biological carbon nanotubes?). The Birrin doesn't look very small but has thin legs, so I assume it lives on a low gravity world. I wonder what really small animals look like: hair-thin legs?)

Anyway, I cannot resist plugging the concept of 'centaurism' once more; the Birrin looks like its manipulative front legs have evolved from walking legs, so there we are again... 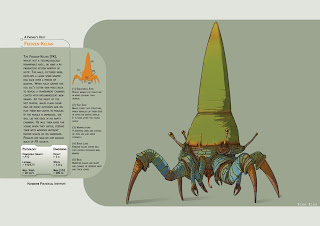 Here is another fine animal, one with (largely) radial symmetry. It is good to know that tetropters and spidrids are not the only animals in the fictional universe with radial symmetry. They have their counterparts in the known universe, with anemones and starfish and the like, but sadly we know of no animals walking around with any degree of elegance. I like the anatomical details of this one. I have no idea whether or not it is supposed to live on the same world as the Birrin. 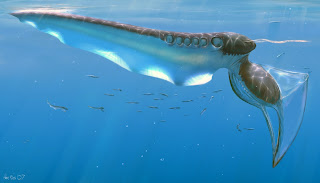 What an intriguing shape. It is probably so intriguing because it is not immediately obvious what part does what, or why it is where it is. That is what makes it convincingly alien, I think. Is it a passive floater? It has a rather large bladder, apparently larger than a mre swimbladder would require. What are the membranes for, I wonder; perhaps they are a sea anchor to make it fave waves head-on? 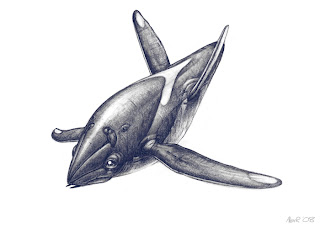 This one I found on Deviant Art. This animal is an excellent example of convergent evolution. I do no just mean that it is similar in some ways to seals, turtles or plesiosaurs, with its apparent 'swimming with wings' design. I was thinking about 'convergent speculation', meaning that it resembles a design that someone else has also come up with. In this case that someone is me, but you see this happening everywhere where people sit down with a sketch pad and create new animals (while writing this I hesitated a bit with the word 'create', because creationists have tainted it to such a degree that it is difficult to use without evoking wrong connotations). The animal I was thinking about follows: 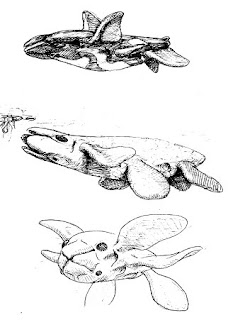 See the resemblance? Mine was just a very rough sketch, but it conveys the general idea; they are 'AYUS' (As Yet Unnamed Species) from the 'Fishes IV' class. There are differences too, such as the apparent size differences, with mine at about a meter, and his perhaps at humpback size. But look at the similar design of the mouth parts. Before anyone thinks otherwise, I am not saying that either one of us took the idea from each other's work. That cannot have been the case anyway, as mine was done over 10 years ago and has never been published.

It's a simple case of convergent speculation! Of course there are clear influences to be seen in some people's work pf others'ideas, I think that Alex' work looks all his own. Anyway, there are a limited number of biological principles to go around, so all of us tend to arrive at the same ones, having all been subjected to similar ideas. Luckily, there are infinite ways to arrange such similar ideas (and if that sounds a bit like Mr Spock, so be it).

Be certain to have a look at the websites I mentioned, as there is more to see there. But not enough to satisfy the appetite for more... I hope Alex Ries will be successful in getting his book published, because his work makes me very curious to see more of it.

Posted by Sigmund Nastrazzurro at 13:36

Alex Ries combines the best of artistry and speculative bio-design.

On the subject of "convergent design", those whale-squid remind me of some of the creatures from the ill-maintained spec dinosaur project, especially the last one on the page:

I'm not sure which name you go by in the real world, but I have been fascinated by your world you've created. I even have the creature art on your blog in my 'inspiration' folder among other random things of interest that I find for artwork I create.

I too have a universe I've been working on. There are several websites for it but the hub is www.projectcosmos.net.

If it's alright with I'd like to put your blog as a link on one of my sites and perhaps vice versa?

Again, I really enjoy your work. You have a fertile mind. :)

I've always gotten a chuckle out of 'convergent evolution' myself. Great minds think alike, and all that.

But Alex Reis' work truly is unique and dynamic! I can't wait to see more from him!

Of from Furaha, for that matter...

>>It must live on a low-gravity world. I think so because its legs are rather spindly and stick out sideways, instead of being held vertically underneath the body. On Earth such limb positions only work for animals that are rather small, up to the size of a coconut crab, but most animals with such limb designs are smaller that that.

I'm not sure this characteristic is a consequence of organism size/gravitational effects at all. Arthropods certainly seem to prefer the "splayed" leg organization, but that's because they have many, and get more the bigger they are, which is a consequence of how exoskeleton limbs scale worse to large sizes than endoskeletal ones. They also prefer "flat" organization because of how molting/growing works: if/when an arthropod sheds its exoskeleton, it has to compress itself vertically due to gravity, producing these kinds of splayed designs.

On the other hand, while elephants obviously have straight down, stocky organization, so do deer, or rats for that matter. Komodo dragons, on the other hand, are quite bulky do stretch out their legs, walking in a way analogous to a human with their elbows outstretched, despite weighing a great deal more than rats - I'd attribute the columnal leg organization more to a shared heritage than any kind of strict design principle (at least not before the extremes).